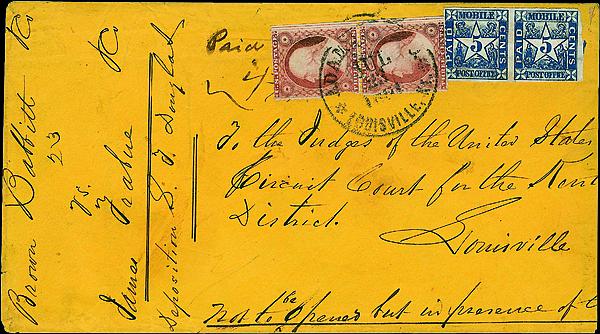 An Adams Express Co. cover from July 1861, franked with a pair of the 5¢ blue Mobile, Ala., postmaster’s provisional. This gem was offered June 24 in the Robert A. Siegel sale of part 1 of the Brandon collection of Confederate States stamps and postal history.

To say that Ralph Brandon had a passion for collecting the stamps and postal history of the Confederate States of America is an understatement.

Over the course of many years, he and his son Mark quietly formed a stellar CSA collection.

Now, thanks to the June 24 sale at Robert A. Siegel Auction Galleries in New York City, a new generation of collectors competed to add the Brandon treasures to their collections.

Prior to the sale, Siegel published a handsome, meticulously researched auction catalog. Even if you don’t collect CSA, the catalog is worth having as a reference work.

In his introduction to the sale catalog, Mark Brandon reminisces fondly about a visit to a stamp dealer that ignited their shared passion for the CSA and its philatelic artifacts.

“What followed was a lifetime passion with Confederate philately,” Brandon writes. “We went to countless exhibits and auctions in our effort to build a unique collection.

“Over time we made it a family affair, with my father and I mounting and organizing frames, and my mother using calligraphy to make the pages. This collection was exhibited many times, winning every major prize offered.”

While some might lament that decision, we can only rejoice in the fact that Ralph kept adding to his collection to, as Mark states, “make it better.”

That he most assuredly did.

As I perused the catalog, it became apparent that father and son had a keen eye for quality and rarity.

“There are many one-of-a-kind items,” Mark states, “and if there are only two or three known, there is a good chance he had them all.”

Illustrated on this page is one cover that I found particularly appealing.

It is an Adams Express Co. cover that was carried across the lines in July 1861.

A pair of the 5¢ blue Mobile, Ala., postmaster’s provisional (Scott 58X2) combines with a pair of the 3¢ George Washington (26) to pay the double-rate 10¢ Confederate and double-rate 6¢ U.S. postage.

The 50¢ express charge, written in manuscript as “Paid 4/6” (four bits, which was equal to the double rate of 50¢), is partially obscured beneath the Washington pair.

According to the Siegel catalog, the two postage rates and the express charge are “correctly prepaid.”

Siegel also notes that the cover “is the only double-rate Mobile thru-the-lines express use ...”

No doubt the new owner of this gem will treasure it as much as Ralph and Mark Brandon did.

We will have a full report on the June 24 (part 1) sale in a future issue of Linn’s. Siegel will offer part 2 of the Brandon collection in the fall.