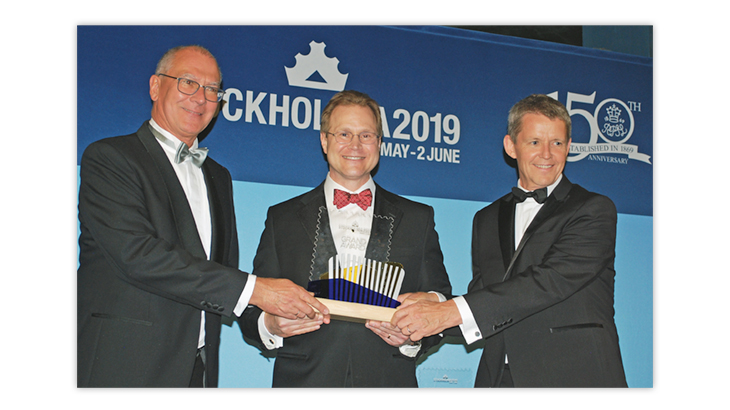 Daniel Ryterband of the United States (center) won the grand award for the Stockholmia 2019 international exhibition with his exhibit “A Country Divided: Effects of the American Civil War on the Mails.” Karl Louis and Dieter Michelson of the Global Philat 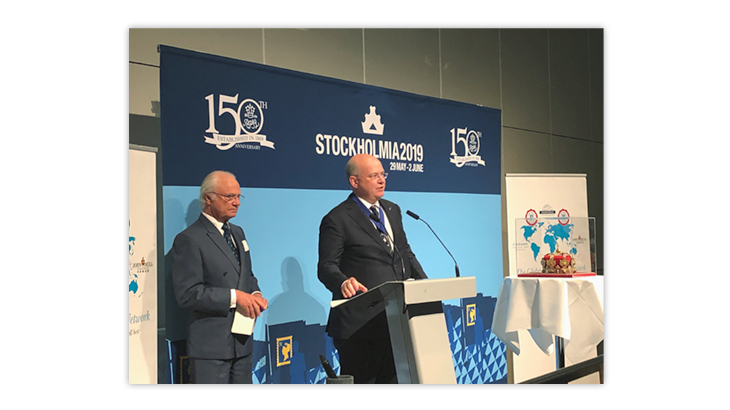 King Carl XVI Gustaf of Sweden was welcomed to the Stockholmia show by Royal Philatelic Society London president Patrick Maselis, who presented the king with a chocolate replica of the Swedish royal crown. Photo by Jay Bigalke. 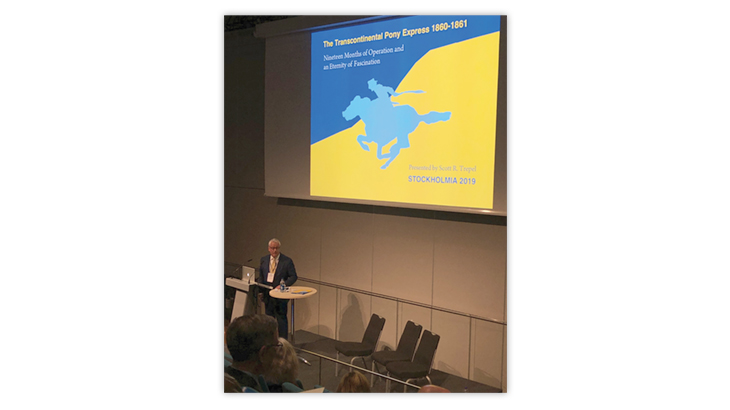 Scott R. Trepel at his presentation titled “The Transcontinental Pony Express 1860-1861: Nineteen months of operation an eternity of fascination.” Photo by Jay Bigalke. 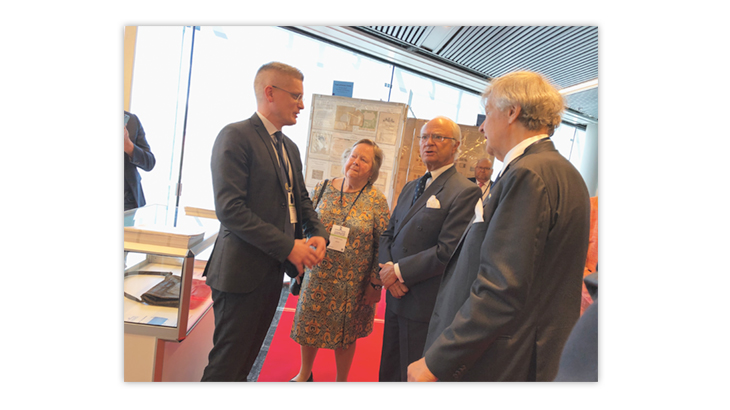 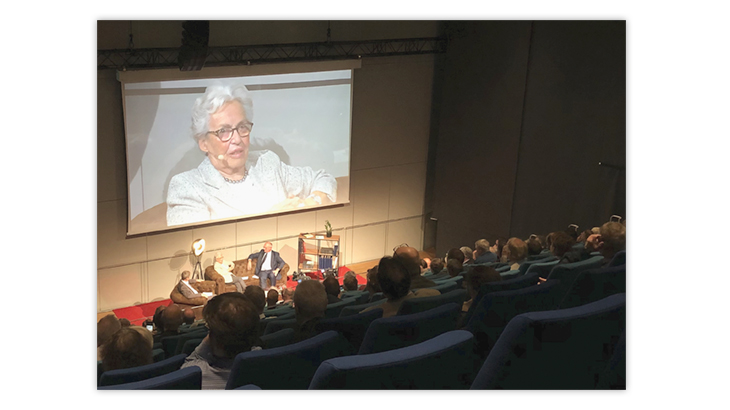 Helga Haub, widow of Erivan Haub, during a presentation of the Erivan collection. Photo by Jay Bigalke. 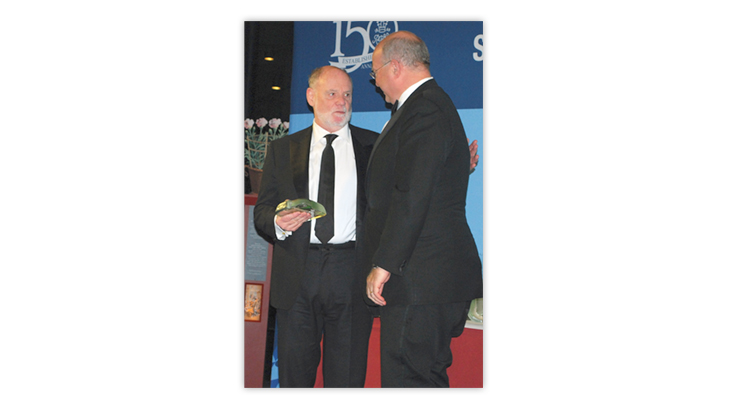 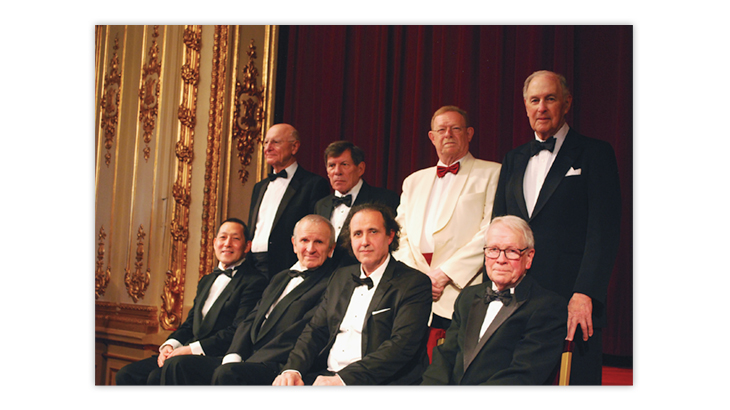 Shown seated (left to right) are the new Roll of Distinguished Philatelists signatories with their sponsors standing behind them: Prakob Chirakiti with sponsor Brian Trotter, Guy Dutau with Jean Francois Brun, Hany Salam with Chris King, and Alan Warren w
Previous
Next

After more than four years of planning and preparation, the international philatelic exhibition Stockholmia 2019 welcomed thousands of collectors from around the world May 28-June 2 at the Waterfront Congress Centre in Stockholm, Sweden. The largest Swedish philatelic exhibition since 1986, it came together as the premier event marking the 150th anniversary of the Royal Philatelic Society London (RPSL).

It is a fair question to ask why a United Kingdom-based organization would host its most significant event for its 150th birthday outside of the United Kingdom.

The exhibition hosted more than 2,000 frames of material, including the invited noncompetitive, court of honor and competitive exhibits, across four floors of the Waterfront Congress Centre.

More than 200 public seminars, classes, presentations and meetings were held at the show. Topics ranged from “The origin of philatelic literature in Europe: Germany & Austria” by Wolfgang Maassen to “Hawaii Foreign Mail” by Richard Malmgren to “Zeppelin LZ-129 Hindenburg Onboard Postmarks” by Cheryl Ganz to “The Transcontinental Pony Express” by Scott Trepel.

A highlight presentation for me was the interview and conversation with famous collector Erivan Haub’s widow, Helga. Her stories about interactions with many of the famous collectors of the 20th century and her anecdotes about her husband’s pursuit of different parts of his expansive collection were fascinating.

The final attendance count for Stockholmia 2019 was 7,832 unique attendees from 51 different countries across six continents. Attendees from the United States accounted for the third largest cohort, trailing only Sweden and the United Kingdom.

To compare this with the largest club show in the United States, a successful American Philatelic Society Stampshow has under 50 percent of the number of attendees, exhibits and public meetings and seminars. Of course, the APS Stampshow is a four-day event, compared to six days for Stockholmia.

The exhibition utilized the entire Waterfront Congress Centre with dealer booths, seminars and exhibits located across five levels of the building. Initially, this appeared to be a daunting challenge to navigation, but the building’s numerous escalators, elevators and exhibition signs made it all fairly simple.

There was an enormous range of material to view and buy, ranging from stamps and covers that sold for $5 each up to $500,000.

The Stockholmia awards celebration event took place on Saturday, June 1, at the Vasa Museum. Rated as the No. 1 tourist destination in Sweden, the museum features the 17th-century warship Vasa that sank on its maiden voyage and was recovered in the mid-20th century. I cannot think of another evening event at any national or international philatelic exhibition that matched the breathtaking atmosphere created by having the ship Vasa next to attendees during dinner.

These two exhibits also received the two highest number of jury votes for the overall Stockholmia 2019 grand award, with Ryterband winning in the end with his “A Country Divided: Effects of the American Civil War on the Mails” exhibit.

Additionally, the signing of the Roll of Distinguished Philatelists took place during Stockholmia at the Hall Of Mirrors of the Grand Hotel in Stockholm. American Alan Warren was among the four honorees. (For more information, see the front-page article in the April 8 issue of Linn’s.)

The United States will host a celebration event for the RPSL’s 150th anniversary Oct. 17-20 at the Smithsonian’s National Postal Museum in Washington, D.C. All are welcome to participate and enjoy. More details are available online.