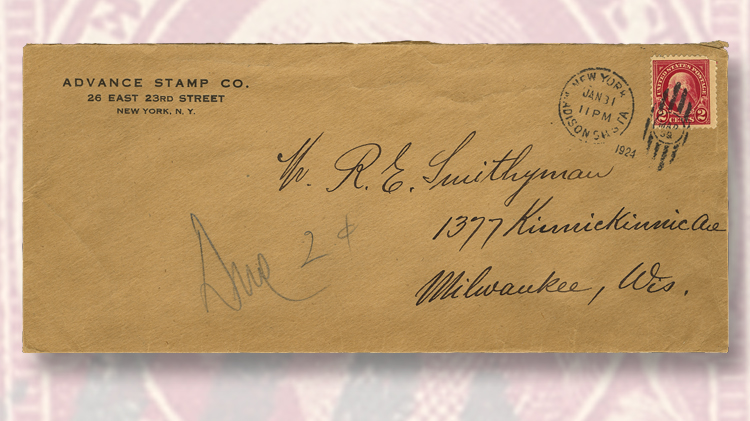 The pair of cinderella stamps inscribed “Advance Stamp Company” (shown at top in the first illustration) is affixed to the back of this cover sent from the Advance Stamp Co. of New York, N.Y. 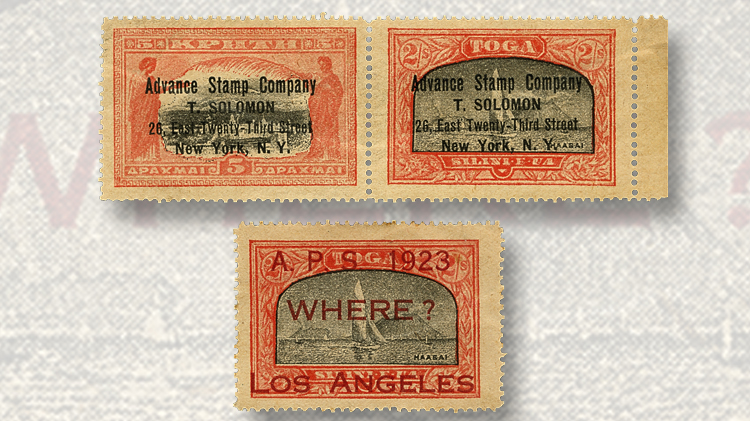 These three cinderella stamps graphically cropped from the backs of two 1924 covers (shown in the next two illustrations) are currently unidentified. Can a Linn’s reader provide any information on the origins of these stamplike labels? 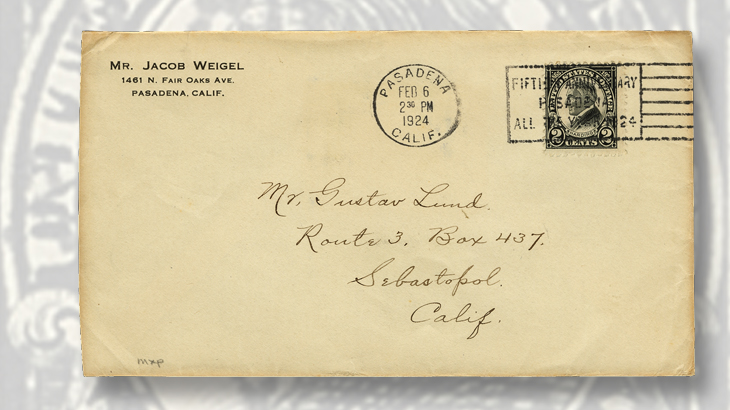 The single cinderella inscribed “A.P.S. 1923/Where?/Los Angeles” (shown at bottom in the first illustration) is affixed to the back of this cover canceled Feb. 6, 1924, in Pasadena, Calif.
Previous
Next

Many philatelic puzzles remain to be solved, and, in the past, Linn’s readers have been good at contributing information that either led to a solution or solved the puzzle outright.

With that in mind, I present three stamplike labels, or cinderellas, that undoubtedly have stories behind them, but these tales currently are lost in the mists of time.

Two of the labels are inscribed “Advance Stamp Company, T. Solomon, 26 East Twenty-Third Street, New York, N.Y.” They are affixed to the back of a cover from that company that was postmarked Jan. 31, 1924.

This cinderella also is affixed to the back of the cover, the front of which is postmarked Pasadena, Calif., Feb. 6, 1924.

With its “APS” inscription, the label might have been a promotion trying to lure the annual American Philatelic Society convention to Los Angeles. If so, it was not successful, because that year’s convention was held in Washington, D.C. However, Los Angeles was the choice for 1925.

The central designs for these cinderellas appear to be borrowed from stamps of Tonga and Cyprus.

However, there is nothing that identifies the origin of the labels, and I have nothing in my library or clipping files that reveals who made them or why, or how widely they were distributed and used.

Given the dates, I wonder if these might be A.C. Roessler productions, because he made a wide range of philatelic cinderellas during this era, but I’m grasping at straws.

This is where Linn’s readers come in. If you can help, please contact me, John Hotchner, at Box 1125, Falls Church, Virginia 22041, or send me an email.