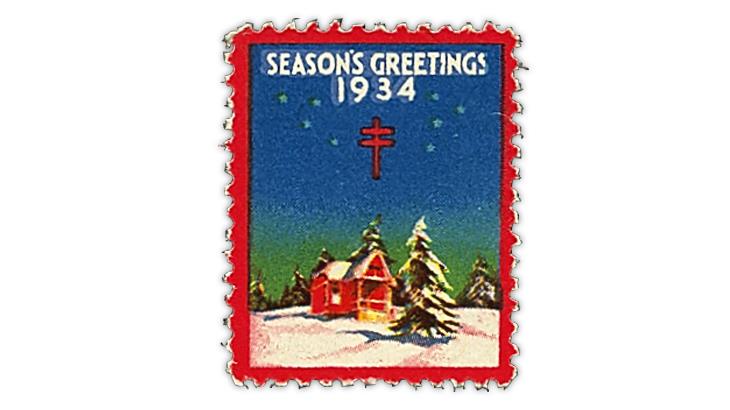 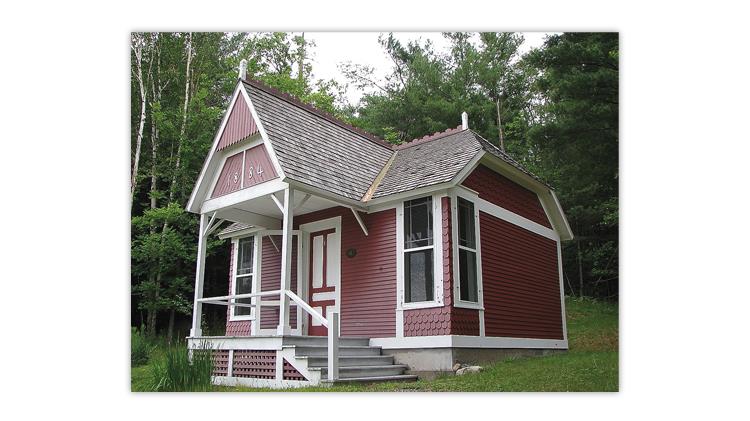 Figure 2. This photo of “Little Red” taken in 2008 offers a sharp contrast to the setting shown on the seal. (“Little Red of the Adirondack Cottage Sanitorium” by Mwanner, - Own work, CC BY-SA 3.0, https://commons.wikimedia.org/w/index.php?curid=4362903).
Previous
Next

The design of the 1934 United States Christmas seal features a small, red cottage set starkly against an evening sky and white snow. Figure 1 shows this seal.

The article included 24 illustrations. Among these is a then-contemporary image of the cottage, nicknamed “Little Red,” that is featured on the Christmas seal.

Compared to the image on the Christmas seal, the cottage appears quite different in this photograph. The seal shows the cottage as it is thought to have looked in 1884. In the photograph, no longer is the cottage lonely with just a single Christmas tree in front of it; instead, it is almost overgrown with trees and bushes.

The significance of the cottage is captured by the following paragraph from Vosburgh’s article:

“You saw its picture on the Christmas seal in 1934. Still standing, at Trudeau, near Saranac Lake, it symbolizes the war on tuberculosis, and the efforts of that intrepid disease-fighter, Dr. Edward L. Trudeau. On a hill where the doctor used to hunt foxes, he built this one-room red cottage in 1884 and to it he brought his first tuberculosis patients, two girls from a New York tenement house. Today’s tiny, unpretentious ‘Little Red’ is surrounded by the numerous up-to-date buildings of the Trudeau Sanatorium, a ‘tuberculosis university.’”

Trudeau (1848-1915) had come to the area in 1873 as a tuberculosis sufferer. The Adirondacks’ cold air and the quiet, peaceful surroundings helped to cure him.

That experience and his study of Prussian Dr. Hermann Brehmer’s success in treating tuberculosis with a rest cure in cold, clear mountain air led Trudeau to establish the Adirondack Cottage Sanatorium for the study and treatment of TB.

The complex developed into a huge enterprise, eventually justifying its own post office for the area. After Trudeau’s death, the post office was named after him.

To make a long story short, the sanatorium closed Dec. 1, 1954, after the discovery of effective antibiotic treatments for TB. However profits from the sale of the land and complex were invested in a new medical research facility, the Trudeau Institute, built on Lower Saranac Lake, which opened in 1964.

Subsequently Little Red and a statue of Trudeau were moved to the new site as memorials.