Strap on your hockey skates for the February cartoon caption contest 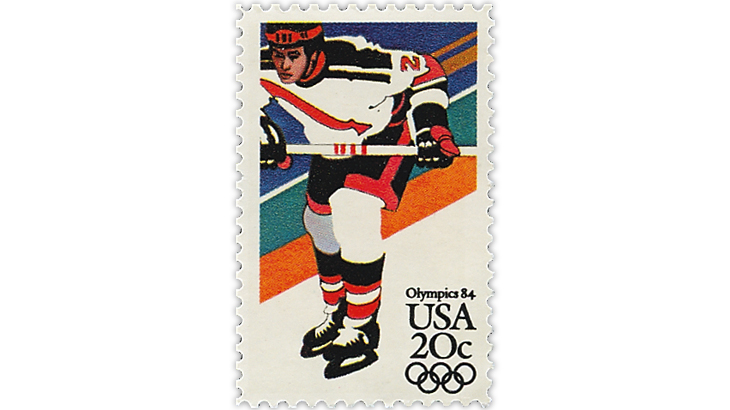 The cartoon caption contest image for February is the United States 20¢ Hockey stamp in the 1984 set of four honoring that year’s Winter Olympics. Entries must be received by Feb. 24 for a chance to win a prize.

Ice hockey is a fast, intense and sometimes violent sport. The iconic photo is of a smiling hockey player missing his front teeth. Also, while not the standard by which the sport is evaluated, there is some truth to the meme, “I went to a fight, and a hockey game broke out.”

The sport was celebrated on a 20¢ stamp issued Jan. 6, 1984 (Scott 2070), in a set of four marking that year’s Winter Olympics. The other stamps in the set feature ice dancing, downhill skiing and cross-county skiing.

It may be a stretch unless you have mastered ice skating, but put yourself in a hockey player’s uniform and tell me what you might be saying or thinking about the game, the Olympics, the stamp or whatever else occurs to you. You might focus on anything from postal service to the sport of politics.

Entries must reach me no later than Feb. 24.

Channel your inner elf for the January cartoon contest