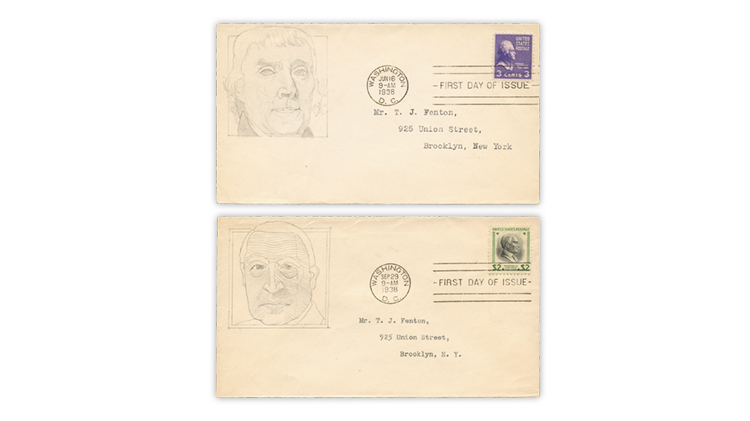 These two 1938 Prexie first-day covers with original art cachets represent a group of 22 of the 32 in the set that the artist completed. The quality of the pencil drawings is striking.

A friend in Illinois likes to watch out for odd philatelic items in local auctions. Some time ago, he bid on and won a lot of 1938 Presidential issue first-day covers each with an original pencil sketch to match the president honored on the stamp.

It is not a complete set of the Prexies. He explained: “The story I got was that Mr. Fenton, the addressee, was a part time illustrator for Readers’ Digest. He got 22 of the 32 stamps in the series done, but had a stroke before being able to complete all the art.”

The set of 22 covers plus one that has only the frame with nothing inside cost my friend $30. I would say that was a bargain.

Two examples of these FDCs are shown here. To me, they are remarkably good likenesses of the subjects, shown full face rather than the side views that were used for the stamps.

Fenton, if indeed he was the artist, clearly was a man with talent.