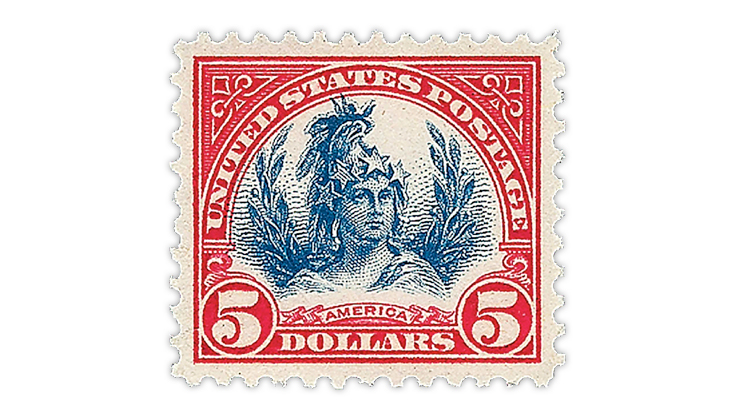 The United States 1923 $5 Head of Freedom Statue, Capitol Dome definitive stamp is a good buy at 85 percent of up to full Scott catalog values in unused, hinged condition or mint, never-hinged condition.

Beginning in 1908, all U.S. definitive stamps showed only Benjamin Franklin or George Washington.

With the new definitive series of 1922-25 (Scott 551-573), the subject of the stamps was greatly broadened to include a wide range of presidential and historical topics. The stamps were printed by flat plate on unwatermarked paper and were perforated gauge 11.

The $5 high denomination of the series (Scott 573) features the head of the Statue of Freedom from atop the dome of the U.S. Capitol. The striking bicolor stamp has a carmine frame with a blue vignette.

Erected in 1863, the bronze statue was designed by Thomas Crawford (1814-57). The statue is of a robed female figure wearing a starred ancient military helmet. Her right hand holds the hilt of a sheathed sword with the point resting near her feet. Her left hand holds a laurel wreath atop a shield resting at her feet.

The Scott Specialized Catalogue of United States Stamps and Covers values the $5 Statue of Freedom stamp at $90 in unused, hinged condition and $180 in mint, never-hinged condition.

An example in very fine grade with fresh color is a good buy at 85 percent of up to full Scott catalog values.