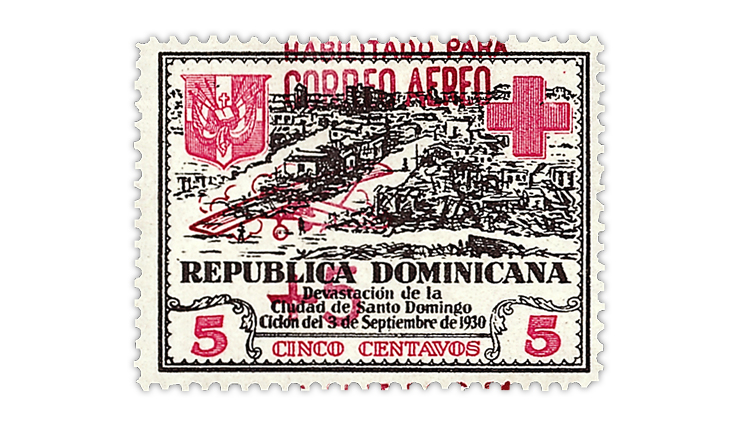 The Dominican Republic occupies the eastern five-eighths of the island of Hispaniola in the Greater Antilles archipelago of the Caribbean Sea. The western part of the island is the nation of Haiti.

Hispaniola was discovered by Christopher Columbus on his first voyage to the New World in 1492 and colonized by Spain.

The island gained its independence from Spain in 1821. The Dominican Republic won independence from Haiti in 1844. President Woodrow Wilson sent the United States Marines to occupy the country in 1916; the occupation ended in 1924.

On Dec. 3, 1930, the Dominican Republic issued a set of six airmail postal tax stamps (Scott RAC1-RAC7) created by overprinting “Correo Aero” and surcharging Hurricane Relief postal tax stamps. The overprint includes the silhouette of a monoplane with the wing above the fuselage.

Use of the airmail postal tax stamps was obligatory on all postal matter mailed by airmail during the required period, with the surtax being equal to the postage charge. The funds collected went to relief of victims of the hurricane of Sept. 3, 1930.

Hurricane San Zenon was the fifth deadliest Atlantic hurricane on record, killing more than 8,000 people in the Dominican Republic.