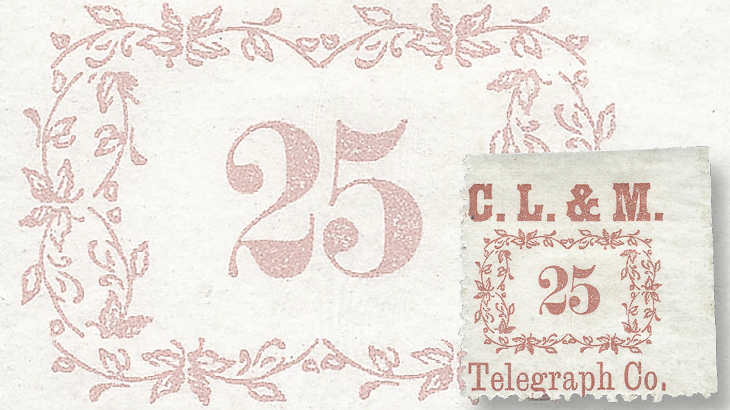 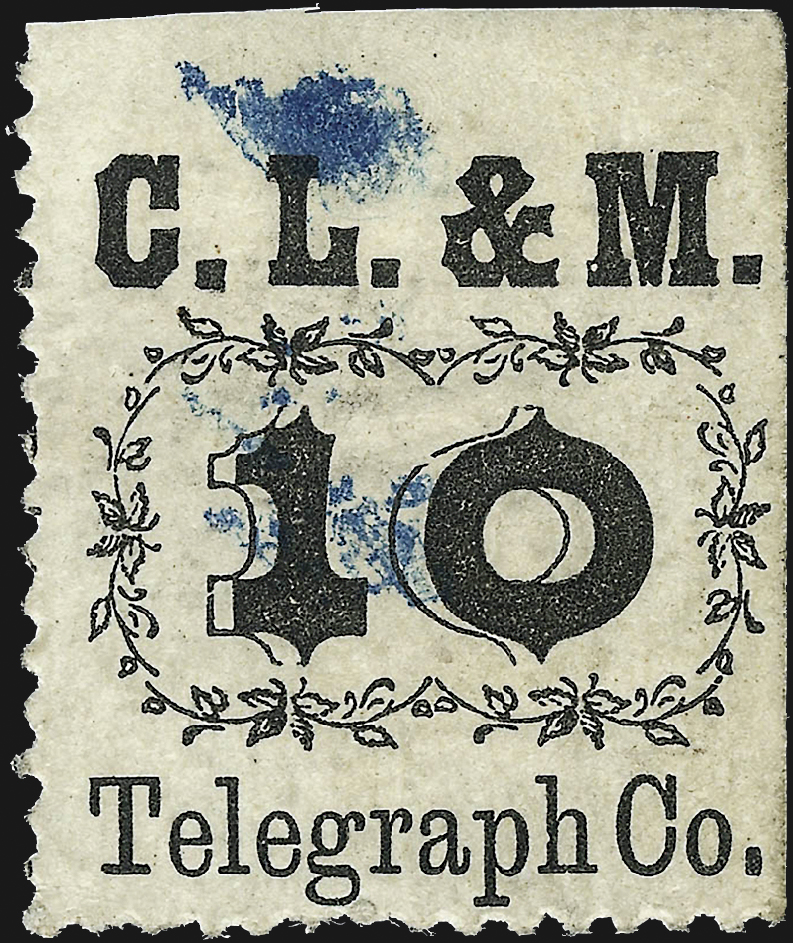 The tiny Colusa, Lake & Mendocino Telegraph Co. served only four areas in California in the 1870s. This black 10¢ stamp is the sole survivor of that denomination. It sold in Siegel’s Wilson Born sale in June for $10,925. 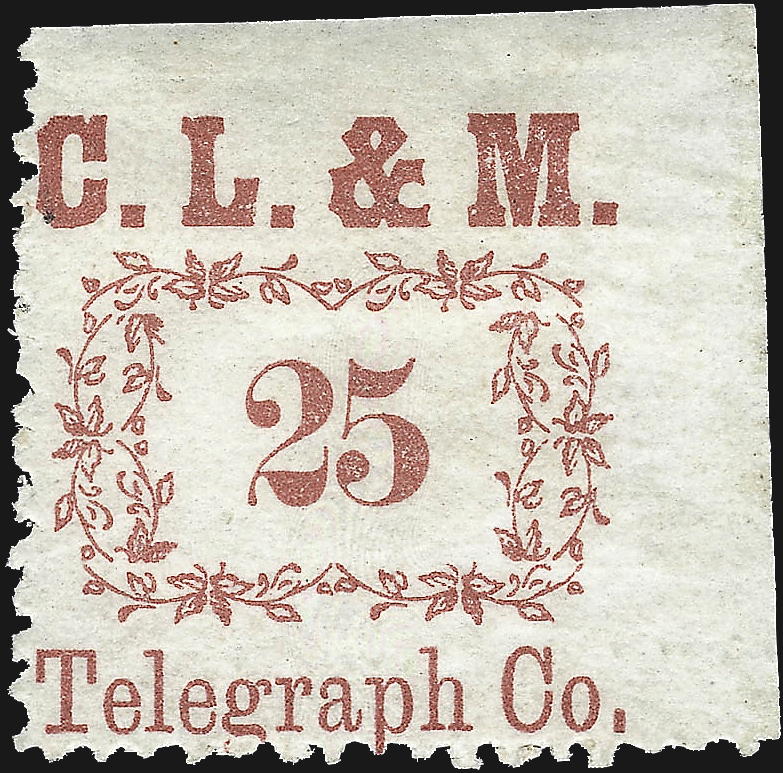 This unique example of the 25¢ Colusa, Lake & Mendocino Telegraph Co. stamp, from the Wilson Born collection, sold with a cover and telegraph sending slip for $12,075 in Siegel’s June sales.

Possibly the only intact strip of six 1855 stamps of the City & Suburban Telegraph Co. of New York City — the first private telegraph company in the world to issue stamps — sold for $8,625 during Siegel’s June sales. It was from the collection of the late Wilson Born.
Previous
Next

On June 23, Robert A. Siegel Auction Galleries offered the Wilson Born collection of United States telegraph stamps, which were issued by private firms from the 1850s until the 1940s for the purpose of sending, receiving or storing telegraphic messages during the technology’s pioneering days. Some of the stamps entitled select users to free or reduced-price services, while others were sold to the public for prepayment.

Wilson Born, who died a few months ago, was what Siegel called a “yew tree,” a figure of such dominance and persistence that he overshadowed his philatelic field and “made life for competing collectors very difficult.” The introduction to the sale catalog refers to “a collection of extraordinary depth and importance. We dare say this is the largest offering of stamps and covers in this field ever made.”

Born not only delved into the philatelic details of the printing and production of telegraph stamps, but also researched the operational history of the companies, many of which were small, obscure and short-lived.

Among the top items was a se-tenant strip of six stamps printed for the City & Suburban Telegraph Co. of New York City, said to have been the first private telegraph company in the world to issue stamps, in 1855.

The six stamps — a 2¢, three 1¢, another 2¢ and a 3¢ — are listed in the “Telegraph Stamps” section of the Scott Specialized Catalogue of United States Stamps and Covers as Scott 6T1-6T3 and represent a full horizontal row of the printed sheet. Although the Scott U.S. Specialized catalog lists the se-tenant pair of 2¢ and 1¢ and the se-tenant strip of 1¢, 2¢ and 3¢, it does not list the full row of six.

The stamps were intended for messages to be left in drop boxes around the city. Like many early telegraph schemes, this system promptly failed and most of the stamps went unused. Nevertheless, Siegel says it was unable to find a record of another existing intact strip of six. Estimated at $5,000 to $7,000, it fetched $8,625.

Another tiny firm was the Colusa, Lake & Mendocino Telegraph Co., which started in 1873 and ran lines in those three California counties plus Napa. In 1875, it issued stamps with values of 5¢, 10¢ and 25¢, and the latter two survive only as unique examples. Wilson Born owned both.

The black 10¢ (Scott 7T2), although unused with original gum, shows a partial blue “P.L.W.” handstamp, the superintendent’s initials, as do many of the C.L.&M. 5¢ stamps. Once upon a time, four examples of the 10¢ were reported, but the other three are now believed lost. The stamp sold for $10,925.

The red 25¢ C.L.&M. stamp (Scott 7T3), also with original gum, was likewise described as “one of the two greatest rarities of telegraph stamp collecting.” A second example once existed, but was presumed lost — together with one of the 10¢ stamps — in the great Berkeley, Calif., fire of 1923. Accompanied by a cover and telegraph sending slip with C.L.&M. imprints, the stamp went for $12,075.