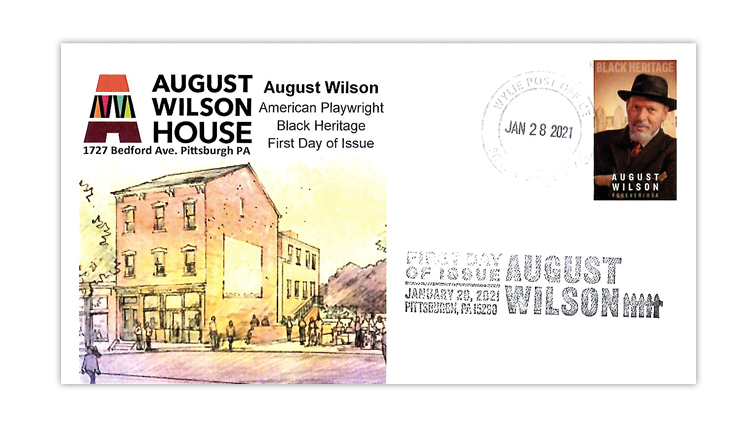 The handstamped official first-day cancel on this August Wilson first-day cover missed the stamp, but an unofficial cancel just touches it neatly at left.

Having a first day of issue in your hometown is always exciting for stamp collectors, even if you don’t really collect United States stamps or first-day covers.

I have made it a point to attend any first-day ceremony in Pittsburgh, Pa. I also like creating philatelic projects.

Because of the COVID-19 pandemic, there was no first-day ceremony open to the public. I went to the Pittsburgh post office around 9:30 a.m. on the issue date, and during the 45 minutes I was there, I was the only one who asked for the August Wilson stamp.

There were signs up about the stamp, but no special window. The stamps were available, and someone in the back was canceling covers.

I prepared covers for myself and my August Wilson House friends. I handed my covers to the window clerk who took them to the person in the back.

I like unofficial FDCs, so I asked the clerk to cancel two covers with the circle dater. I also gave him two addressed envelopes to go into the regular mailstream to receive a machine sprayed-on cancel.

I asked to have the cancel applied low on the stamp, but the covers came back with the cancel below the stamp, not touching it. The cancels were mostly underinked, not of the quality usually seen with mailed-in postmark requests.

There is a post office a few blocks from the August Wilson House, and I decided that if I could get a second cancel applied to the uncanceled stamp, that would make the cover something special.

When I arrived at the second post office, I explained my situation to the clerk. He took one look at my covers and said, “These stamps aren’t canceled, I can cancel them.”

I made it back home with time to spare to watch the 11:30 a.m. online ceremony streamed live on the Postal Service’s Facebook and Twitter pages. The 10-minute event still can be viewed on those platforms.

Unfortunately the two covers that traveled in the mail did not fare well. One was returned Jan. 29 with no cancel on the stamp, and the stamp was damaged by machinery. The second arrived Feb. 1, the stamp canceled with a black marking pen and the ZIP code boldly handwritten across the front with the same marker.