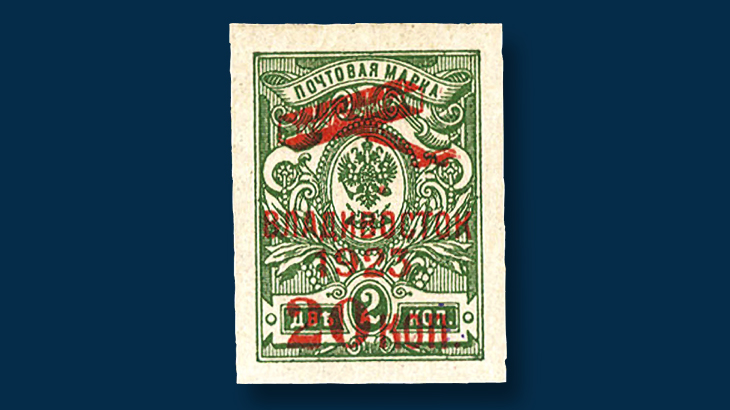 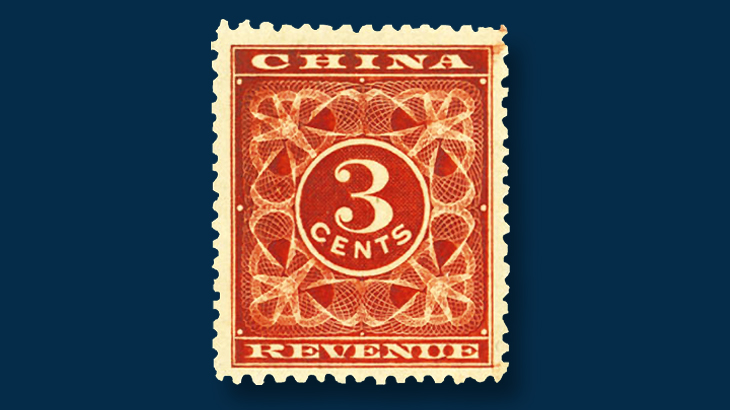 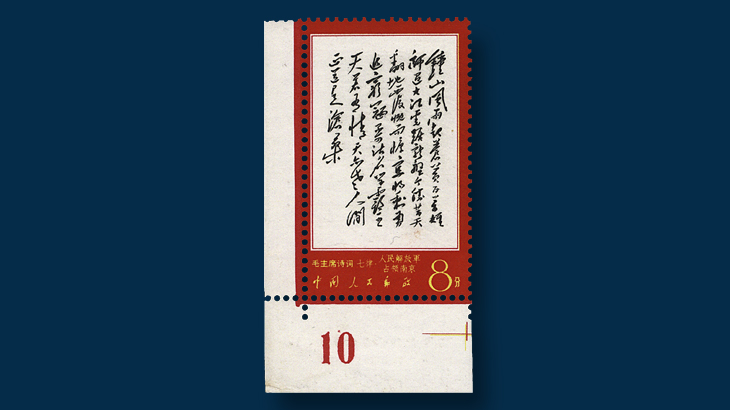 A complete set of China’s 1967 Poems of Chairman Mao stamps with intact numeral margins was sold during the Dec. 9-12 John Bull auction in Hong Kong.
Previous
Next

The highlight of the sale was a set of 1967 Poems of Chairman Mao stamps (Scott 967-980) with numeral corner margins. The Scott catalog value for a complete mint set in very fine condition is $3,550. This set with numeral margins realized nearly $32,500, including John Bull’s 15 percent buyer’s premium.

The numerals represent the Chinese government number for each stamp. These numbers were printed on the stamps themselves on many later issues. Extremely few Poems of Chairman Mao sets exist bearing these official numbers.

Most prominent was a never-hinged 1896 3¢ red revenue without surcharge, perforated gauge 14 (footnoted in the Scott Standard Postage Stamp Catalogue after Scott 85). These revenue stamps were never used for their intended purpose; instead, they were surcharged and used postally.

Only 761 stamps were left unsurcharged at the General Post Office. One of the finest surviving examples without the surcharge, realized $109,250, including the 15 percent buyer’s premium.

A used vertical strip of three of the Geneva 1850 5-centime Vaud issue (Switzerland Scott 2L6) realized $37,375 at the Cherrystone auction. It is likely that only a few multiples of this size exist.

Two German 12-pfennig+38pf semipostals were prepared for issue in May 1945, but the fall of Germany to Allied forces prevented their use, and nearly the entire printing was destroyed by the Allies. A few escaped, however, perhaps in the pockets of Allied soldiers. Commemorating the Motor Corps (NSKK) and the Flying Corps (NSFK), these have become prized rarities. The two examples (one of each) in the Cherrystone auction were unused but affixed to gray cards “as always,” and sold for $26,450.

The Far Eastern Republic existed from April 1920 to November 1922 as a nominally independent state providing a buffer between the Russian Soviet Federative Socialist Republic and the territories occupied by Japan during the Russian Civil War.

Although the Far Eastern Republic was absorbed into the Russian Federation in 1922, two sets of stamps were issued for the region and apparently valid for postal use in 1923. A complete set of the overprinted mint airmails (Michel 45A-58) realized $17,250. The print run for some of these values was as low as 25.

In 1924, 13 state organizations in Italy were allowed to issue stamps. The experiment was deemed unsuccessful, and the program was not renewed in 1925.