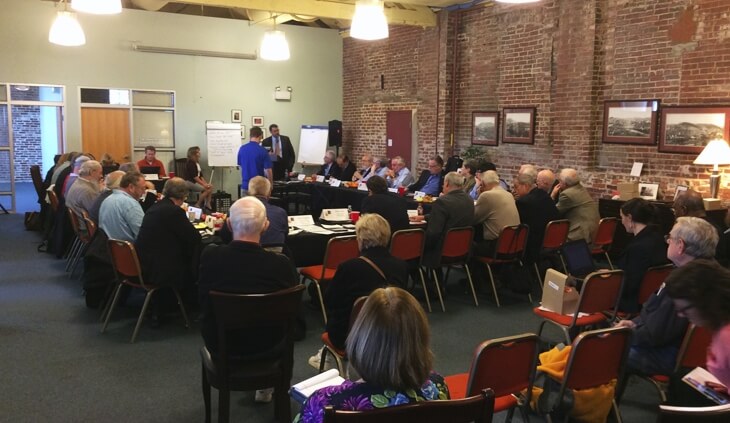 More than 30 hobby leaders met Oct. 28 for the Summit on the Future of Philately at the American Philatelic Center in Bellefonte, Pa. 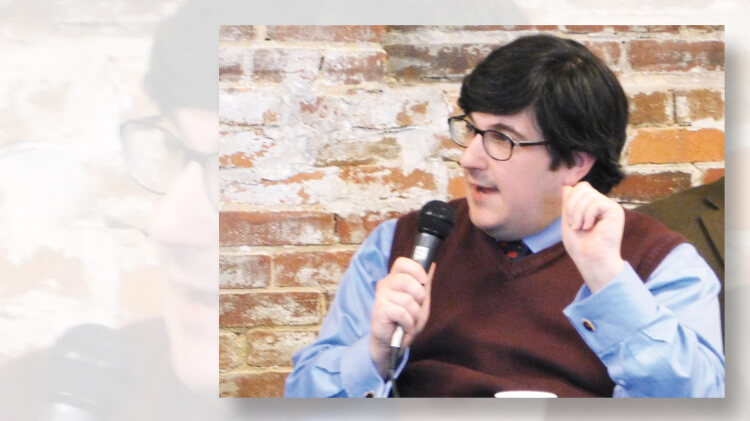 Daniel Piazza, representing the Smithsonian’s National Postal Museum, speaks during the Oct. 28 Summit on the Future of Philately.
Previous
Next

The American Philatelic Center in Bellefonte, Pa., hosted the Summit on the Future of Philately Oct. 28 with a public session in the early afternoon.

APS Executive Director Scott English guided the conversation, with a welcome by APS President Mick Zais, and ASDA President Mark Reasoner, whose collaboration was key to bringing the event together.

“Working together as one team, creating our own future, I think that’s what we’re here for today,” Reasoner said.

The participants enthusiastically discussed the topics of growing the hobby, the future of stamp shows, and dealers and philatelic partnerships, along with ways the leading organizations involved in the stamp hobby can work together to make it succeed and grow.

Much of the meeting took on the format of a brainstorming session, with comments from almost everyone present, including audience members.

Cordless microphones were passed to the various speakers in the large meeting area so that everyone could hear the remarks as they were presented.

The 100-minute public meeting was presented live online, creating an archived video that can be accessed through the APS Facebook site.

“I think we get confused sometimes about whether the hobby or organized philately is struggling,” English said, “and the hobby — if you look at eBay and see how transactions are happening — the hobby’s alive and well, probably will be for many years to come.

“But if you look at organized philately — the APS, the ASDA, the ATA, you go down the list — and you go to stamp shows, you go to stamp clubs, and then you see a different story.”

Discussion began with the subject of growing the hobby, and concerns that the hobby is suffering from an image problem.

The concerns expressed might be familiar to anyone who has been involved in the stamp hobby for a while: public perception that the hobby is passive and dull, and associated with “old fuddy duddies.”

Suggestions to counter this image and effectively market the hobby to others included promoting the low cost of the hobby, emphasizing creative aspects of the hobby, or bringing in well-known personalities or celebrity stamp collectors as role models.

How to reach these audiences? Social media was considered one of the most important options, with an expansion of online presence a necessity.

The discussion moved on to forging stronger partnerships between the representative groups that support and represent the stamp hobby.

For many of those in attendance, the final subject was among the most critical: supporting the viability of stamp shows and the community of stamp dealers.

It was suggested that one way of making stamp shows more appealing to collectors who are not currently part of organized philately is to rebrand shows with a name that is more generally recognizable than the “-pex” suffix often used to designate a “philatelic exhibition.”

Megan Orient, APS director of shows and exhibitions, suggested questions to be considered to attract collectors to stamp shows, and from there into organized philately.

“How do we make the first impression, when you walk into a show, more attractive to a noncollector as well, visually? Not only what’s in front of them, to buy or to do, but really interest them in the show?” she said.

Other subjects discussed included the role of dealers at stamp shows, and the efforts of show leaders and volunteers.

What does the future hold for the hobby leadership group? An action plan developed by those present recommended creating “a permanent group to address the growth and identity of the hobby,” with a presentation of plans at the next APS winter stamp show and exhibition in Reno, Nev., at the beginning of March 2017.

Collectors can also contribute their ideas, comments and suggestions by sending an e-mail to the group before that March meeting using the address future@stamps.org.

“Everyone who is here is passionate about the hobby, and we want to share that passion with other people,” said Zais at the close of the meeting.

“Clearly working together we can achieve more than working separately.”