Supplementary mail and its long history in New York 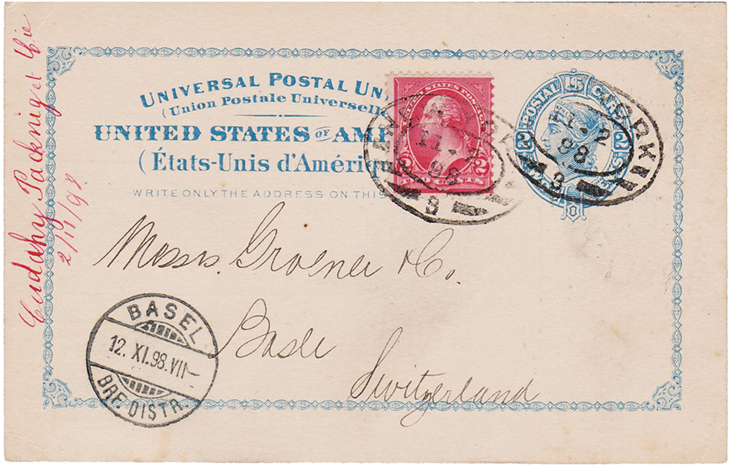 Uprated postal cards used for supplementary mail, such as this example sent to Basel, Switzerland, in 1898, are infrequently encountered. 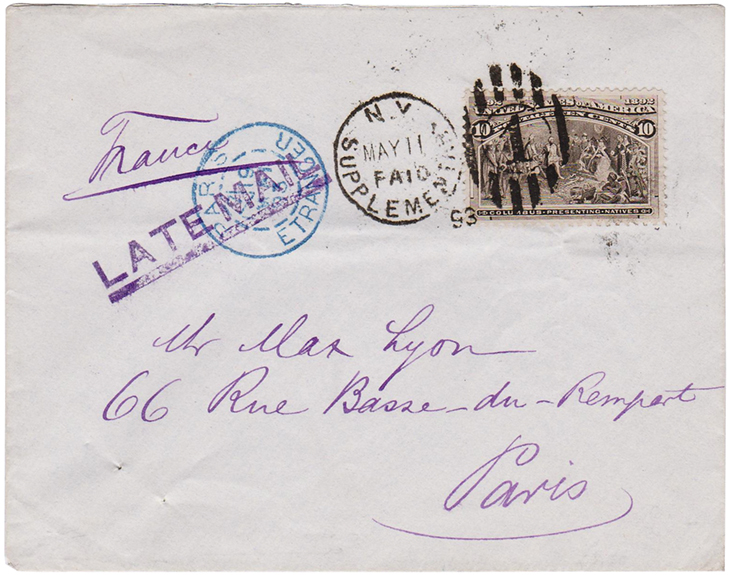 A single 10¢ Columbian Exposition stamp satisfied the 5¢ postage and 5¢ supplementary mail fee on this cover sent from New York City to Paris, France, in 1893. 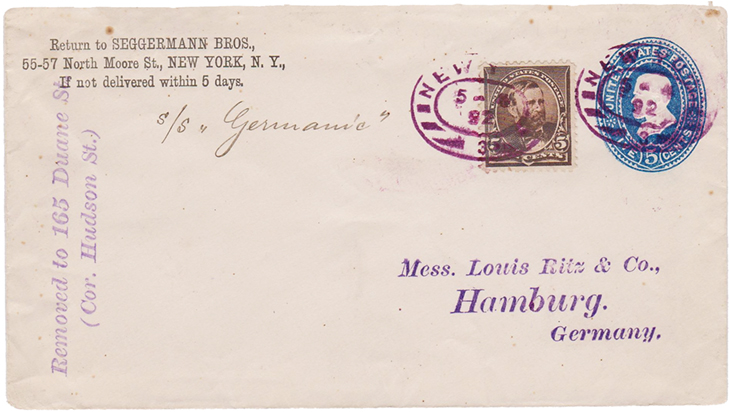 Note the “3” at the bottom of the purple oval supplementary mail postmarks on this 1892 cover sent from New York City to Hamburg, Germany. The number indicates the ship pier to which the cover was delivered for subsequent carriage via ship. 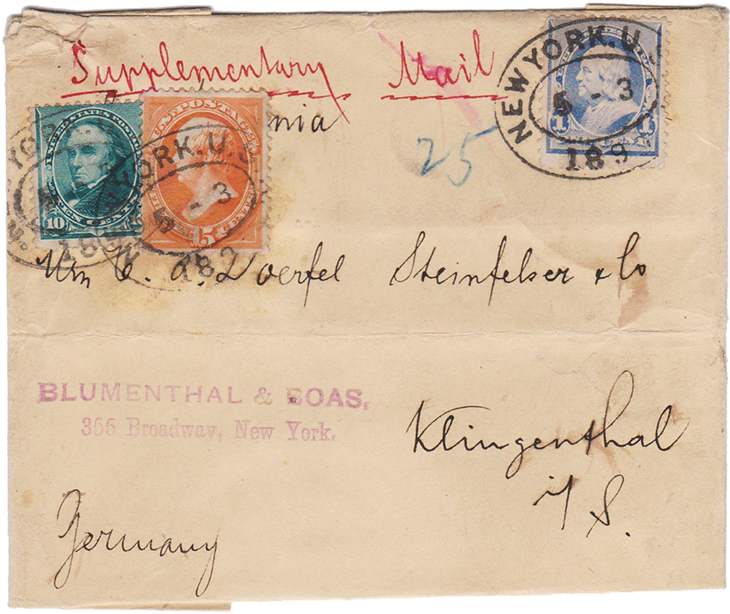 This cover, sent to Klingenthal, Germany, in 1890, is a very unusual supplementry mail use. It is a folded down part of a package wrapper endorsed “Supplementary Mail” in red ink, which probably carried either commercial papers or samples of merchandise.
Previous
Next

In 1840, the United States and Great Britain entered into the United States’ first agreement to exchange mail under contracted treaty rates between the two countries. The Cunard Steamship Line was given the contract and began carrying the mail May 6,1840.

This service was well-received, but there arose the problem with the mailbags being closed two to three hours before the sailing of the ship. In 1849, Great Britain took steps to solve this problem.

British postal officials created a system where mail posted after the bags were closed and within a short period of time before a ship sailed could be placed in special bags for a fee and still be posted. This extra charge was called the late fee.

This system proved popular in Great Britain, and so the United States introduced this procedure July 7, 1853. The U.S. postal officials called it supplementary mail.

In the United States, the Post Office Department charged double the regular postage for this service. During this early period, cash was used to pay the supplemental mail fee for double postage; the mailed item was franked with the correct treaty postage amount only.

Thus, a cover from this era can only be identified by having a postal marking stating it to be supplementary mail.

In this column, I limit the subject to mail from New York City, which by far had the most supplementary mail posted overseas. Also, the examples shown in the slideshow above are from the 1890s, when both ship pier and New York post office mail was serviced.

When U.S. supplementary mail began in 1853, it was carried to the ship and posted. In 1873, the ships no longer directly received the mail; it had to first go to the post office, and from there it was taken to the ship.

In 1891, provisions were made for the mail to be posted either at the post office or ship pier, with different cancels for both places. The post office used a duplex (a circular postmark with an attached killer cancel) handstamp with the word “supplementary” in it.

Mail taken to the pier was canceled with an oval with bars and a number for the pier. This cancellation came in five colors during the 1890s: black, red, purple, blue, and green. Not all mail received these cancellations.

First, there is an 1893 cover to Paris, France, posted at the New York post office with a supplementary mail duplex cancel tying a 10¢ Columbian Exposition to the envelope. The 5¢ international rate was doubled to pay the supplementary mail rate.

This cover is unusual because it also has a “LATE MAIL” handstamp showing that it was in the supplementary mail sent to the ship.

Take a look at the second cover, sent to Hamburg, Germany, in 1892. A 5¢ stamped envelope and 5¢ small Banknote stamp combine to pay the postage and supplementary mail fee.

Note the “3” at the bottom of the purple oval supplementary mail postmarks, which indicates the letter was mailed at pier three.

The third cover is a 2¢ international postal card to Basel, Switzerland, in 1898, with the supplementary mail fee paid by a 2¢ First Bureau stamp. Both the card indicium and stamp are canceled with a black oval postmark showing a “3” at the bottom for pier three. Uprated postal cards used for supplementary mail are uncommon.

The last cover, sent to Klingenthal, Germany, in 1890, also is very unusual. It is a folded down part of a package wrapper endorsed “Supplementary Mail” in red ink, which probably carried either commercial papers or samples of merchandise.

A 15¢ large Banknote stamp and 10¢ and 1¢ small Banknote stamps paid the 26¢ supplemental rate of double the 13¢ rate for 26 ounces for this class of mail.

This area of postal history is growing, and more knowledge of the procedures performed to process such mail is becoming known.