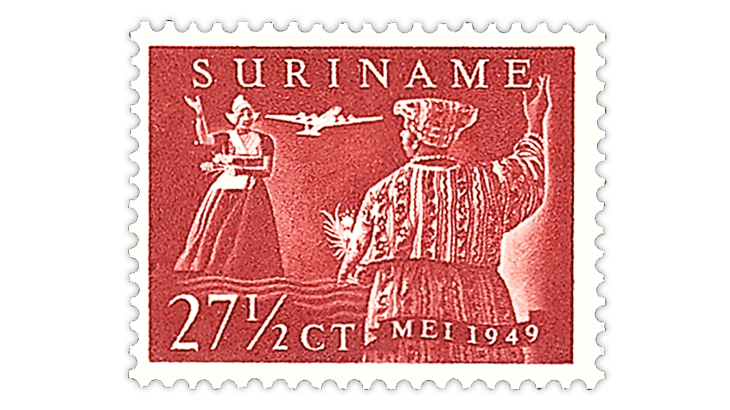 Suriname’s 1949 27½¢ Women of Netherlands and Surinam airmail stamp (Scott C26), which was only valid on the KLM inaugural flight from Paramaribo to Amsterdam, is a good buy in mint never-hinged condition at $4 or $5.

Suriname, the smallest country in South America, lies sandwiched between French Guiana, Brazil and Guyana on the northeastern Atlantic Coast of the continent. After a struggle with the British over territories in the New World, the Netherlands gained the colony in 1667.

The Dutch brought slaves and workers from other colonies to work the plantations in Suriname. As a result, the population is ethnically diverse, with about 28 percent Indian; 22 percent Maroon (descendants of escaped Black slaves and Indigenous people); 15 percent Mulatto-Creole (descendants of Europeans, Black slaves and Indigenous people); 13 percent Javanese; about 13 percent mixed race of unspecified origin; and 3.8 percent Indigenous Amerindian.

Religious affiliation is a similar hodgepodge, with about 48 percent Christian, 22 percent Hindu and 14 percent Muslim.

Most of the population of about 600,000 live along the Atlantic coast and in the capital city, Paramaribo.

An interesting stamp to look for is the 27½¢ Women of Netherlands and Surinam airmail stamp (Scott C26). The stamp was issued May 10, 1949, for the KLM (Royal Dutch Airlines) inaugural DC-6 flight from Paramaribo to Amsterdam, the Netherlands, and the stamp was only valid on mail carried on that May 23, 1949, flight.

The Scott Standard Postage Stamp Catalogue values the stamp at $6.25 in mint never-hinged condition. Despite being relatively inexpensive, the stamp is not that easy to find and is a good buy at $4 to $5.

Souvenir first-flight covers are common and inexpensive, selling for $4 or less.