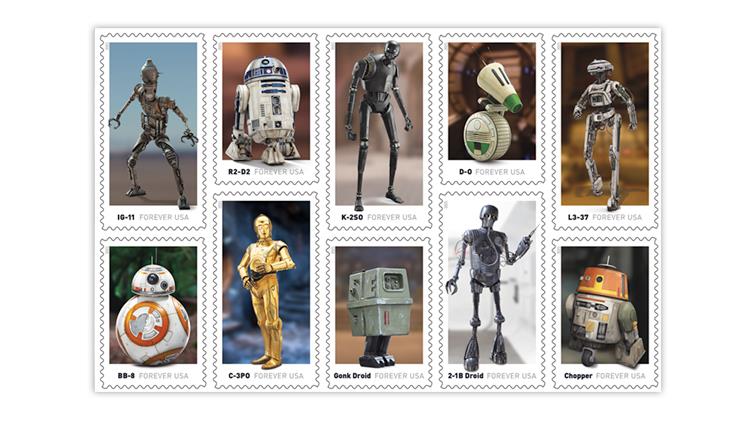 Star Wars Droids, a pane of 20 forever stamps with 10 different designs, will be issued this spring by the United States Postal Service. The new pane follows a 2007 pane of 15 stamps marking the 30th anniversary of the first Star Wars feature film. 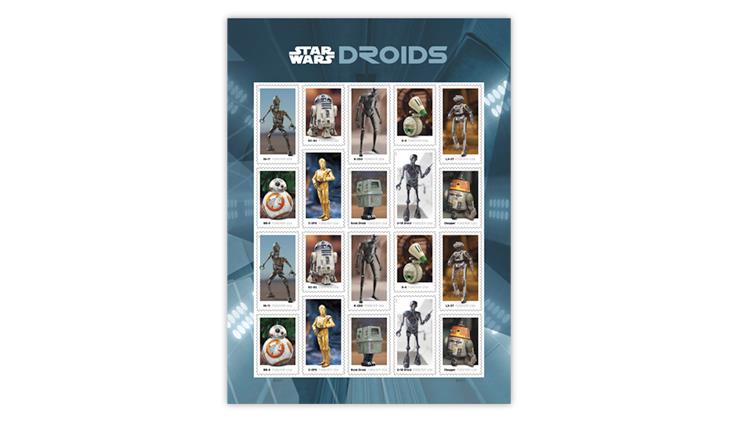 The Star Wars Droids pane of 20 includes selvage artwork of a passageway from the floating Cloud City featured in the 1980 film Star Wars: The Empire Strikes Back.
Previous
Next

Apparently the Force is strong with the United States Postal Service.

In a surprise announcement made Jan. 26, the postal agency revealed that it will issue a set of 10 Star Wars Droids forever stamps this spring.

The actual issue date will be announced later.

The nondenominated (55¢) stamps will be issued in a pane of 20, with each stamp design featured twice in the pane.

Each stamp shows a single droid (mechanical android) that has appeared in one or more feature films in the fictional Star Wars media franchise, or in an offshoot television or streaming series.

The new pane is the second (or third) issue from the USPS to celebrate the Star Wars phenomena.

A pane of 15 41¢ stamps featuring characters from the first six live-action feature films (Scott 4143) was issued May 25, 2007, to commemorate the 30th anniversary of the first feature film in the series.

Five months later, a 41¢ stamp picturing the character Yoda, a Jedi grandmaster, was issued in a separate pane of 20. The Yoda stamp (Scott 4205) adapted the design of a nearly identical stamp from the earlier issue.

The 2007 set of 15 includes two adjacent stamps on the pane that show the two most familiar Star Wars droid characters. R2-D2 is featured on a horizontal stamp with Princess Leia (Scott 4143f), and C-3PO stands alone on a vertical stamp (4143g).

Since the upcoming Star Wars Droids set includes a new stamp for each of them, these two droids will be making their second appearances on U.S. stamps.

“The characters are shown against backgrounds representing settings of memorable adventures,” according to the Postal Service. “The selvage features a passageway from the floating Cloud City above the planet Bespin, introduced in [the 1980 feature film] Star Wars: The Empire Strikes Back.

“These set of droids are a nod to Lucasfilm’s, as well as its parent company, Disney’s, commitment to science, technology, engineering, and math (STEM) learning and the continued collaboration between ‘Star Wars: Force for Change’ and global pre-K-12 nonprofit organization ‘FIRST’ (For Inspiration and Recognition of Science and Technology).

“‘Star Wars: Force for Change’ and ‘FIRST’ have joined forces to expand access to STEM learning to more young people around the world, and to help them envision a brighter, more inclusive future,” the Postal Service added.

The stamps also pay tribute to the 50th anniversary of Lucasfilm, the California-based studio that created the Star Wars franchise.

Greg Breeding was the designer of the stamps and pane. William Gicker was the art director.