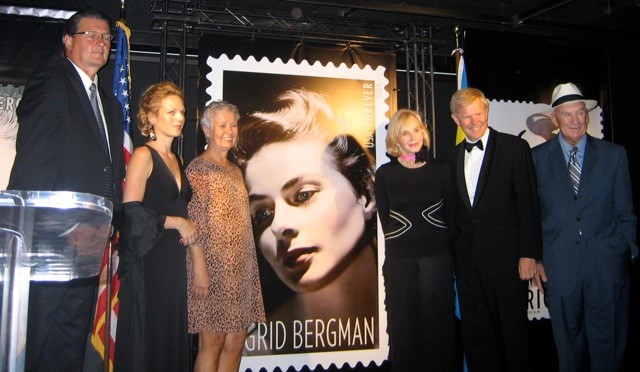 The Swedish Embassy in Washington, D.C., threw quite a stamp party Sept. 9 for Sweden's most glamorous export — actress Ingrid Bergman.

“Who would turn down having their mother on a stamp?” asked Bergman’s daughter, Pia Lindstrom.

In fact, she told an audience of about 250 who arrived at a special ceremony arranged by the U.S. Postal Service and the Swedish Embassy, she believed her mother would be delighted that the American government had issued a stamp in her honor.

“It is like a stamp of approval,” Lindstrom said.

And her mother was once denounced in the U.S. Senate at the height of her career, Lindstrom noted.

That denouncement, according to the actress’s website, came from Sen. Edwin C. Johnson, D-Colo., who called her “a powerful influence for evil.”

It was part of the strong reaction many Americans had to Bergman’s affair with Italian director Roberto Rossellini, which began in 1949.

To make up for that omission, the Postal Service worked with the Swedish Embassy in Washington, which was celebrating what would have been the actress’s 100th birthday with two exhibitions celebrating her life.

The special stamp ceremony came complete with the traditional singing of the national anthems for the United States and Sweden, the unveiling of the U.S. stamp, and a special postmark for a “Bergman Station” and the Legends of Hollywood stamp series, which Bergman joined as the 19th actor to be honored.

Sweden honored Bergman with stamps as well, which were on sale from USPS personnel at the ceremony.

Lindstrom, Bergman’s oldest child, recalled her mother encountered much sadness in her life.

“She was happiest when she was pretending — acting,” she said.

Bergman recalled how quickly her mother went from being “a little girl in Sweden” to becoming an international movie star.

James Cochrane, acting marketing and sales officer for the Postal Service, noted that Bergman once said: “I didn’t choose acting. Acting chose me.”

Britt-Inger Hahne, managing director of PostNord Stamps, said the Sweden and U.S. designs honoring the “most beautiful woman” made it “hard to fail” to produce attractive stamps.

Sweden’s Ambassador to the United States Bjorn Lyrvall said Bergman was “one of the greatest film stars of all time.”

That is not hyperbole, he added. That was what the American Film Institute said of her work.

The evening’s stamp event ended with a black-tie dance featuring music of the 1940s in a ballroom decorated with movie posters of Bergman’s greatest box-office hits.