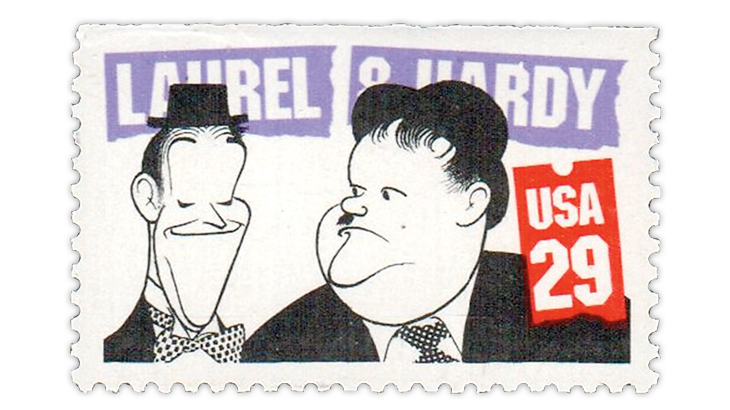 An observant collector from Michigan discovered this tagging-omitted example of the United States 29¢ Comedians booklet stamp honoring Laurel and Hardy in a collection he purchased in 2021.

A newly discovered tagging-omitted error of a United States 1991 29¢ Comedians commemorative booklet stamp came to the attention of Linn’s Stamp News in mid-July.

The production mistake occurs on the stamp shown here honoring Stan Laurel and Oliver Hardy (Scott 2562) that came from a booklet pane of 10 (2566b) containing two each of the five different 29¢ Comedians stamps (2562-2566).

John Musser of Michigan, who has collected untagged stamps for the past two decades, told Linn’s he found the new error in a stamp collection he purchased in 2021.

Musser said he also has what appear to be tagging-omitted examples of the other four 29¢ Comedians stamps (Scott 2563-2566), but he has not submitted them for expertization.

This new error likely will be listed in the 2023 Scott Specialized Catalogue of United States Stamps and Covers to be published in October.

Musser offered thanks to Linn’s U.S. Stamp Notes columnist John Hotchner for suggesting he send the tagging-omitted Comedians stamp to be expertized.