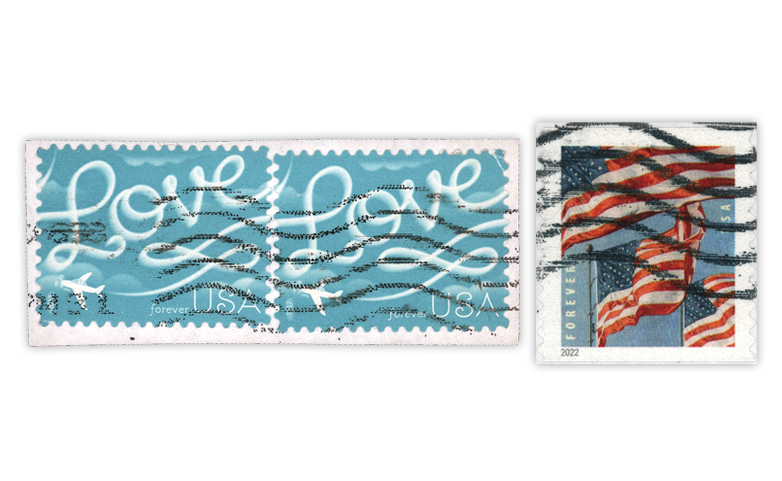 Both errors, which are on piece (clipped from envelopes), are illustrated here.

As shown, the two Love stamps were affixed separately. The right stamp shows some scuffing and a small crease in the top right corner. The Flags coil stamp appears to be completely sound.

Thompson told Linn’s that he sent both errors to the Philatelic Foundation in New York City for expertization. The certificates “both came back stating that they were fakes,” Thompson said.

Thompson said he obtained both errors from fellow collector Bob Murrin in Florida earlier this year.

“[The errors] were found by Bob, and he put them aside thinking they were fakes. When I saw them, I was convinced they were genuine untagged stamps,” Thompson said.

“I originally sent the stamps in [to the Philatelic Foundation] separately, but when the first one [2017 Love] came back, I held onto to it, I didn’t send it back right away,” Thompson said.

In response to questions from Linn’s, Thompson provided some additional insights regarding his evaluation of the tagging-omitted Flags coil stamp.

“On the 2022 Flag coil, I pointed out to [the Philatelic Foundation] that coil stamps from BCA [Banknote Corporation of America], have what is called micro-bridges that hold the sticks (10 attached coil rolls),” he said.

“To break the rolls apart, you break the micro-bridges to do it. The bridges can be found along the top, along the bottom, or along both the top and the bottom of the stamps.

Tagging, which is visible under shortwave ultraviolet light, refers to the phosphor material on stamps used to activate automatic mail-handling equipment.

This may be lines, bars, letters, part of the design area or the entire stamp surface. The tagging may also permeate the stamp paper.

Some stamps are issued both with and without tagging. Catalogs describe them as tagged or untagged.