Taking care of the 5,250-pound elephant is no easy task 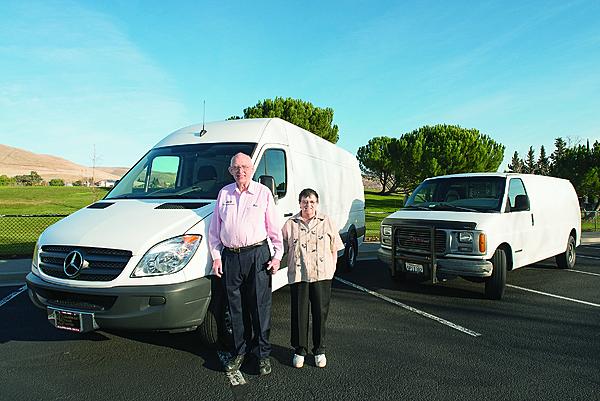 Stamp dealers Jim and Sue Dempsey stand in front of their new van, the Sprinter.

My wife Sue and I have an elephant.

It has grown over the years to where it now weighs 5,250 pounds — a little more than 2½ tons. We are constantly grooming it, feeding it and occasionally cleaning up after it.

That elephant is our stamp stock.

It devours all of our time, every day, seven days a week, frequently 12 to 14 hours a day.

It developed in the dark days of the 1980s, when a crashing stamp market drove us to make a decision to carry anything in philately that someone might want.

But dragging it everywhere we go to shows, criss-crossing the country, is not easy.

Our poor old GMC Savana van, bought the day after the Pacific 97 show ended, has done admirably well, racking up nearly a half million miles.

But the elephant grew to the point where the van was overloaded by almost a ton.

The behemoth would lose weight if we didn’t feed it at least a thousand sets or singles a week.

Over time we learned a lot about traveling in the shadow of our stock.

We got an exotic alarm system, but I still maintained an overly active paranoia.

We had to park in front of the motel door: I mean reach-out-and-touch close. The last thing at night I would tell Sue was, “I’m going out to hug the van.” I would pull at all the doors, make sure the alarm light was blinking, and I wasn’t satisfied until I got close enough to the van to make the perimeter alarm go BLAAAAT!

My worries diminished a bit when we added GPS to the van, but then my mind said, “Yeah, it’ll get stolen, and the GPS will put it in the middle of a lake.”

I nervously joked about telling the police that to find it they should look for a giant gum slick.

We learned early in the game that the key to going a long distance to a show was to get up at 6 a.m., hit the motel’s breakfast bar (or go to a nearby restaurant) and be on the road by 7 a.m.

This is especially important going eastbound.

Over the years we’ve developed a regular routine of using AAA Triptiks, finding decent restaurants through trial and error, and learning which truck stops offer that dark roast bold Colombian coffee that will keep your eyes open.

Loading and unloading the elephant became a three-hour ordeal, followed by two hours to set up.

We cringe when a well-meaning customer asks, “Do you fly to shows?”

At one point I replied, “Oh we used to, but we got tired of going to the airport two weeks ahead of time so they could check our luggage.”

We are now entering a new phase in our lives. We stick to about 15 shows a year. I stopped doing all the loading and unloading 10 years ago, when I was 72.

I could still do it — it just hurt a lot more.

We now hire a labor crew to do the work.

We also just purchased a new breed of super van: the Sprinter, a joint venture by Mercedes, Dodge and Freightliner. Our old van had 313 cubic feet of cargo space. The Sprinter has nearly 500.

I told Sue that it would certainly do us for quite a while.

I got “the look” in return, which told me the new van will do us forever.

We did get a note from a friend that said, “You guys are nuts!”

That may be. But when working on stamps is like a lifelong vacation, how much more could you want?

Jim Dempsey began collecting at age seven and started an approval service in 1956. In 1980 he went full-time on the show circuit. He and Sue sell only at shows; no wantlists or approvals by mail.

As far as retirement is concerned, Dempsey says, “My retirement will be announced sometime during the eulogy.”