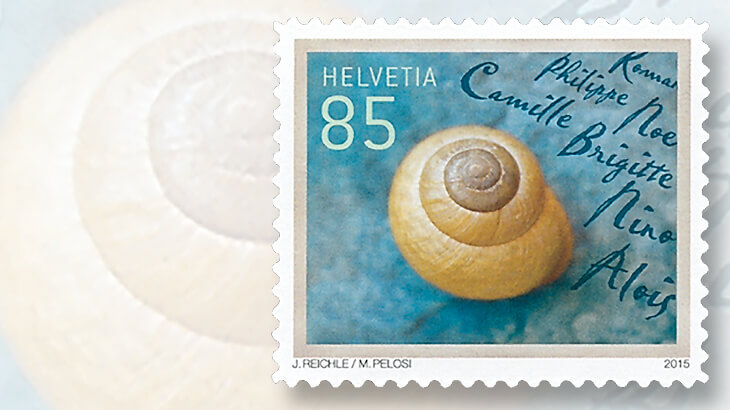 A snail is featured on a Swiss Greetings stamp issued in 2015. The designers, graphic artists Julia Reichle and Martina Pelosi, said the snail represents affinity or solidarity. 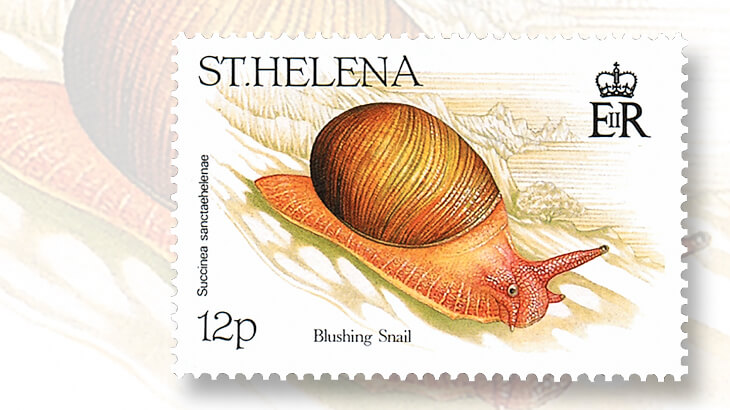 The blushing snail, found only on the South Atlantic island of St. Helena, is pictured on this 12-penny stamp issued in 1995. 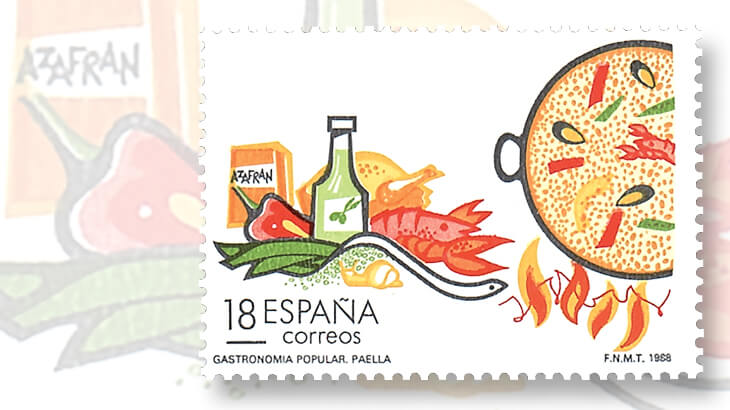 A Spanish Tourism stamp with the theme of gastronomy includes a snail among the ingredients for paella, a traditional rice and seafood dish of Valencia. 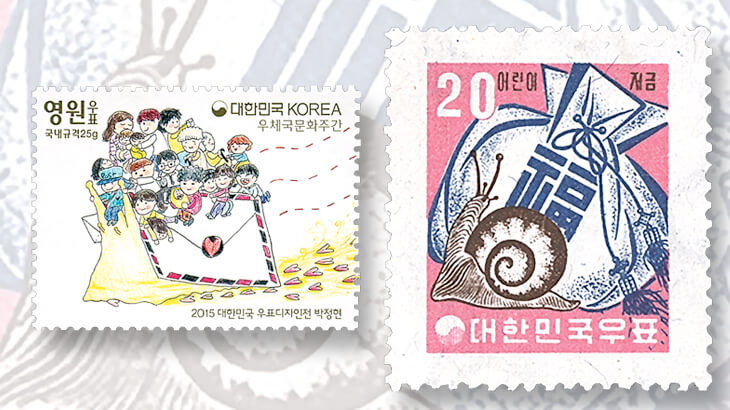 A South Korean stamp issued in 2015, left, shows an interpretation of the phrase “snail mail,” while an earlier 1960 stamp uses a snail image to promote the idea of children saving their money. 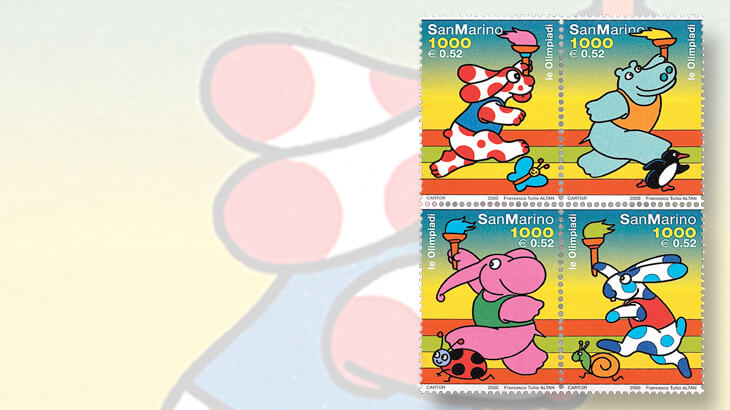 A snail and a rabbit are racing on the stamp in the lower right of this block of four from San Marino commemorating the 2000 Summer Olympics held in Sydney, Australia. 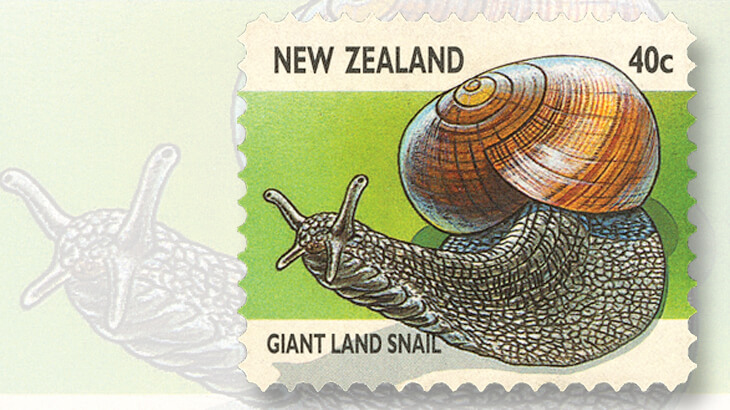 This 40¢ stamp from New Zealand pictures one of that country’s giant land snails, which can grow as large as a man’s fist. 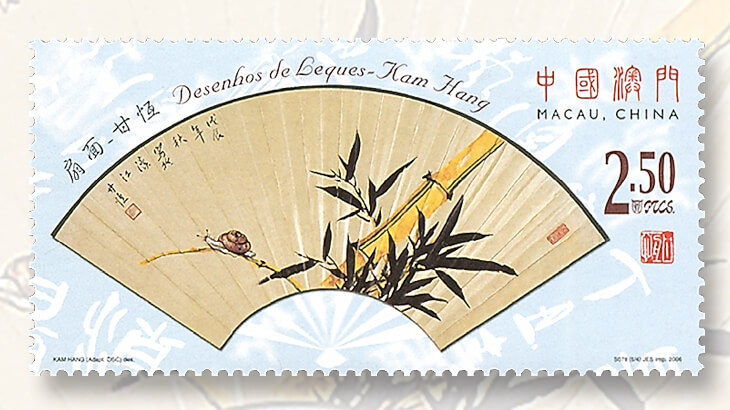 This stamp from Macau features a work of art depicting a snail: Joy of Bamboo, a painted fan by Kam Hang. 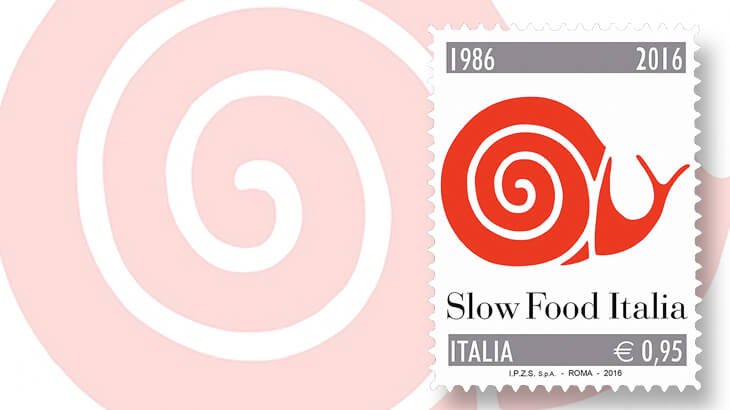 A snail serves as the emblem of the Slow Food Movement that originated in Bra, a town in northern Italy. This stamp was issued in July 2016. 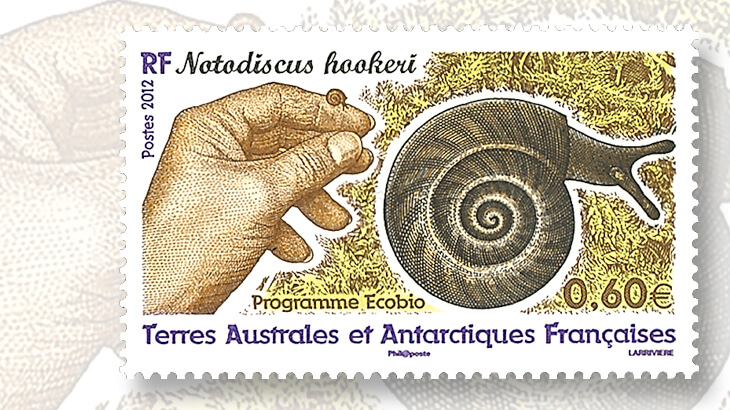 The tiny Notodiscus hookeri snail is shown crawling near the tip of a person’s finger on this stamp issued in 2012 for the French Southern and Antarctic Territories. 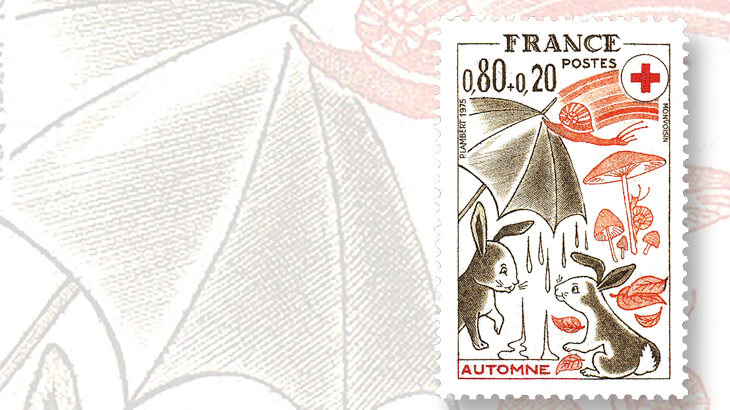 A snail is associated with the rainy autumn season on this Red Cross Seasons semipostal stamp issued by France in 1975. 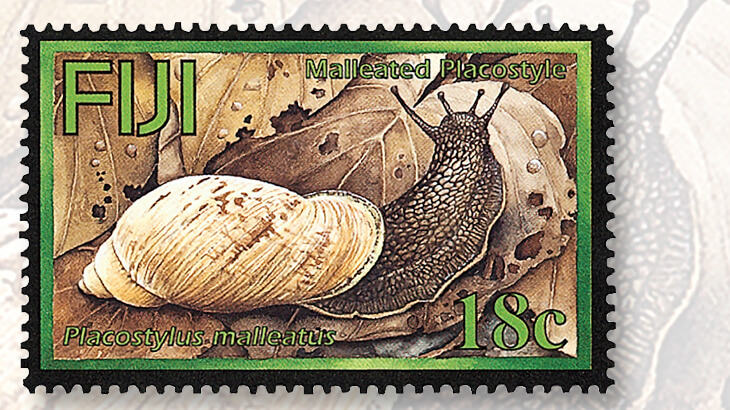 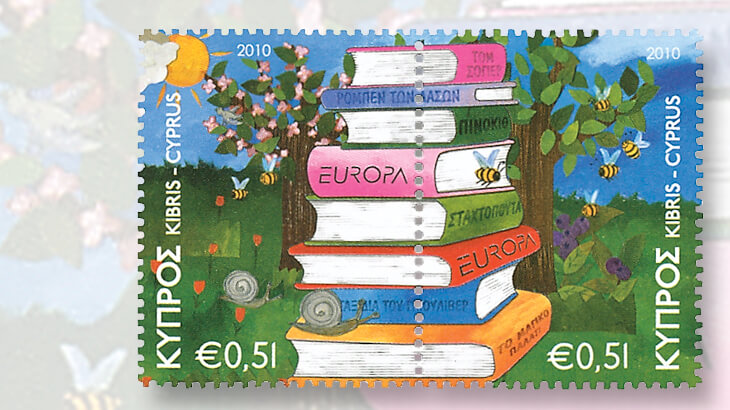 Two small images of snails are included on the left-hand stamp in Cyprus’ se-tenant (side-by-side) pair of stamps portraying the 2010 Europa theme of children’s books. 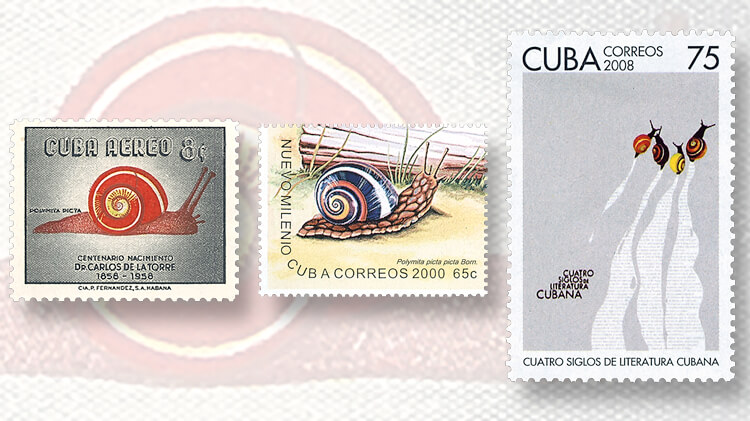 Cuba has issued more than 20 stamps featuring snails, including these colorful examples from 1958, 2000 and 2008.
Previous
Next

Snails have a bit of a public relations problem. They are considered garden pests, the term “snail mail” means slow delivery by a letter carrier rather than instant delivery by email, and one Merriam-Webster dictionary definition of snail is “a slow-moving or sluggish person or thing.”

Fortunately, these gastropod mollusks have fared better in their depictions on postage stamps. Not only do some stamps show beautiful illustrations of snails, but images of snails have been used to represent a variety of different subjects as well.

There are thousands of species of snails found in diverse habitats around the world, living on the land, in freshwater ponds, and in seas and oceans. This article focuses mainly on land snails.

According to the American Topical Association’s checklist of snails and mollusks, Cuba has issued the most Snail stamps, with more than 20 listed. The first of these was a 1958 8-centavo airmail stamp (Scott C182), part of a set of three commemorating the 100th birth anniversary of Carlos de la Torre y la Huerta (1858-1950), a Cuban naturalist who specialized in mollusks. The design features a large image of Polymita picta, commonly known as the Cuban land snail or the painted snail because of its brightly colored shell.

Snails also are pictured on Cuban stamps celebrating other occasions, including Christmas in 1961 (Scott 686-690), the new millennium on a se-tenant (side-by-side) block of five issued Dec. 20, 2000 (4121); and the 400th anniversary of Cuban literature in 2008 (4837). In the design of the stamp mentioned last, four snails are leaving trails of words behind them.

Many other countries have highlighted their land snails on stamps as well.

The blushing snail (Succinea sanctaehelenae), found only on the South Atlantic island of St. Helena, is pictured on a 12-penny stamp in that British crown colony’s 1995 Invertebrates set (Scott 655). St. Helena’s national trust reports that this snail received its name because it has “a translucent shell and various colours of skin tone so it can appear a blushing red.”

Two of the Pitcairn Islands’ endemic snails are pictured on round stamps issued Oct. 20, 2010: Orobophana solidula found on Henderson Island (Scott 707, 709) and Philonesia filiceti from Pitcairn (708, 710). The new-issue announcement describes both these snails as very small.

The supermoon that was in the sky is also on stamps: The Nov. 14, 2016, supermoon represented the closest the moon has been to Earth since 1948, and closest it will be until 2034.

A 2012 stamp from the French Southern and Antarctic Territories (Scott 454) illustrates how small the Notodiscus hookeri snail is by showing it crawling near the tip of a person’s finger. The largest of these subantarctic snails are only about 7.5 millimeters, or 0.3 inches.

New Zealand’s Department of Conservation reported: “These species of native carnivorous snails are the largest in the world, some growing as big as a man’s fist. They suck up earthworms like spaghetti but are among our most threatened invertebrates. Rats and possums are major predators.”

According to Guinness World Records, though, the title of largest known land gastropod goes to an herbivore, an African giant snail (Achatina achatina) that measured 15½ inches “from snout to tail when fully extended” and weighed 2 pounds.

This giant snail and its relative (Achatina fulica) originated in eastern Africa, but were imported by humans to other countries and have proliferated. For example, Tuvalu pictures Achatina fulica on a Fauna stamp issued in 2001 (Scott 863).

Among the many other snails found on stamps are the common garden snail (Helix aspersa) on a 2002 stamp from Monaco (Scott 2725); and the Roman snail (Helix pomatia), the main ingredient in escargot, on a 2014 stamp of Moldova (839).

While for many people the idea of eating snails seems less than appetizing, for others they are considered fine dining.

A recent Italian stamp issued July 26, 2016, features the snail emblem of the Slow Food movement started in 1986 by Carlo Petrini. According to Slow Food, the snail was selected as the emblem for two reasons: because it “moves slowly, calmly eating its way through life” and because it is “a culinary specialty in the area around the northern Italian town of Bra, where the Slow Food movement was born.”

Spain mixes food and tourism on a 1988 stamp (Scott 2548) that pictures a snail as one of the ingredients of paella.

Three French stamps issued in 2014 feature snails; two of these relate to dining. A booklet of 12 of stamps issued Oct. 27 highlighted new industries, including gastronomy (Scott 4718). The shells of four snails can be seen on the Gastronomy stamp.

The other two stamps are part of the May 3, 2014, Vacation set designed by children’s book illustrator Henri Galeron. One stamp (Scott 4619) shows geese getting ready to dine on a plate of two snails, and another pictures a large snail with a camper as its shell (4609).

The camper snail on the French Vacation stamp suggests summer travel. An earlier French stamp, however, associates the snail with autumn rain. Part of the 1974-75 Red Cross Seasons semipostal series, this 80-centime+20c stamp (Scott B482) shows two snails, mushrooms, a pair of rabbits, an umbrella, and rain.

A snail also can be found in the rain on a stamp in Great Britain’s 1991 Symbols of Good Luck set (Scott 1355). In addition to a snail, the design depicts a mallard, a frog, and various cats and dogs.

A stamp in Finland’s 2008 Rain or Shine booklet (Scott 131e) recognizes the snail for its prediction abilities. The new-issue announcement from Finland’s post office said, “According to an old folk belief, snails foretell fine weather by showing their feelers.”

Snails can turn up on stamps where they are not expected. Some of these snails are easy to spot, while others might take a magnifying glass to find.

The South Korea stamp (Scott 303 ) depicts a snail and bags of money. This stamp was issued April 1, 1960, to encourage children to save.

A pixie is riding a snail in the design of a 62-penny stamp in Great Britain’s Mythical Creatures set of 2009 (Scott 2676), and a snail is racing a rabbit on a stamp from San Marino commemorating the 2000 Summer Olympics held in Sydney, Australia (Scott 1483d). A large snail with a floral motif represents the European Campaign for Countryside on a 15¢ stamp from Cyprus (694).

The snails are almost hidden on the 2010 Europa issue from Cyprus with the theme of children’s books (Scott 1134). One stamp in this se-tenant pair shows a snail sitting on a book and a second snail in the grass.

Snails are included in works of art on stamps of Macau and Germany. The former (Macau Scott 1195d) shows Joy of Bamboo, a painted fan by Kam Hang; and the latter (Germany Scott B638-B639) picture illustrations from a medieval prayer book.

A handful of Greetings stamps have pictured snails. For instance, a snail represents affinity on a 2015 Greetings stamp from Switzerland (Scott 1575); a 2003 stamp from Austria conveying the message “Thank You” shows a snail wearing sunglasses next to the cartoon character Tom Tom holding a bouquet of flowers (Scott 1933); and a snail makes a comment about time on a 1994 Swedish Greetings stamp (2085).

In addition, a small blue snail is pictured along with a red porcupine on a Letter Writing Day stamp issued by Japan July 21, 2000 (Scott 2742h).

However, the stamp that most exemplifies snail mail is included in South Korea’s Post Culture Week block of four issued Nov. 18, 2015 (Scott 2457c). One of the winning entries in a stamp-design contest, this artwork by high school student Park Jeong-hyeon is titled “A Slower Speed for a Deeper Love.” It shows a snail carrying love letters, a letter carrier, and a large group of other people.

In announcing the stamp, Korea Post said that the design “expresses the intrinsic meaning of snail mail,” adding that a “mailman may be traveling at a snail’s pace but carries all the affection contained within the letter.”

For information about the ATA and its aforementioned checklist of snails and mollusks, visit the ATA website.