Tasteful stamps, from fruits and vegetables to cake 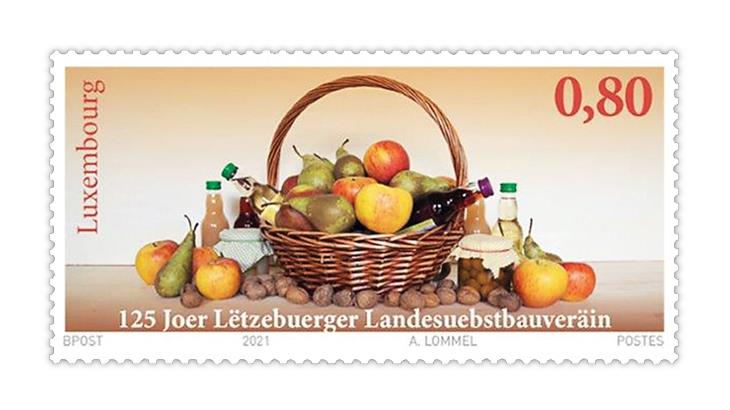 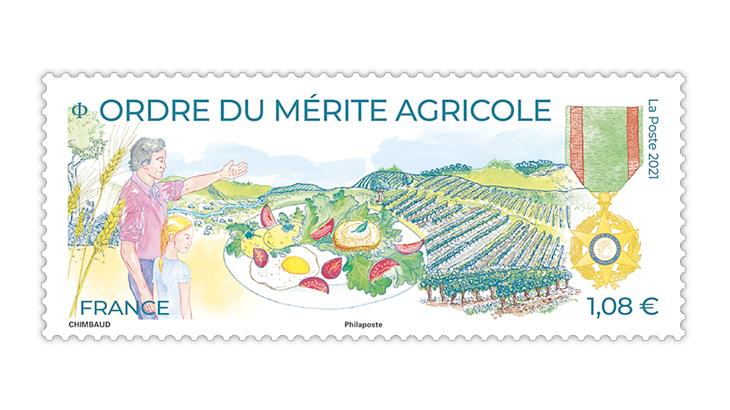 France’s Order of Agricultural Merit was established in 1883. This new €1.08 stamp commemorating the order depicts the medal, a plate of fresh food, a father and daughter, and a scene representing agriculture in France. 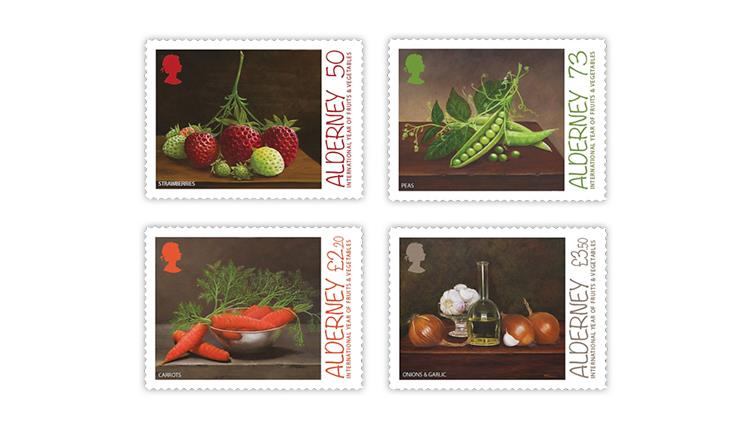 Still life paintings of strawberries, peas, carrots, and onions and garlic are pictured on four of Alderney’s eight stamps to be issued April 7 to celebrate 2021 as the United Nations’ International Year of Fruits and Vegetables. 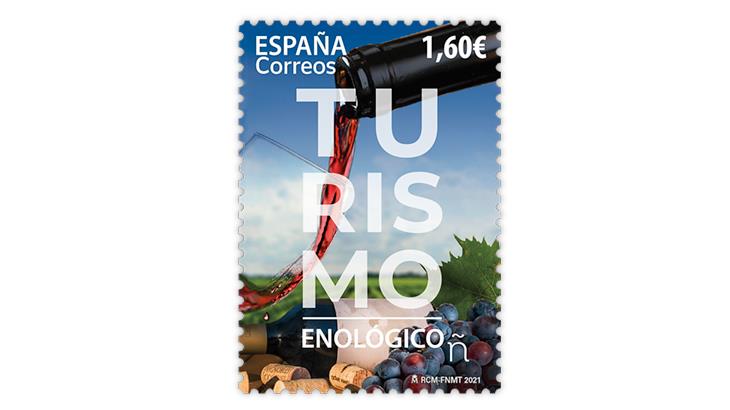 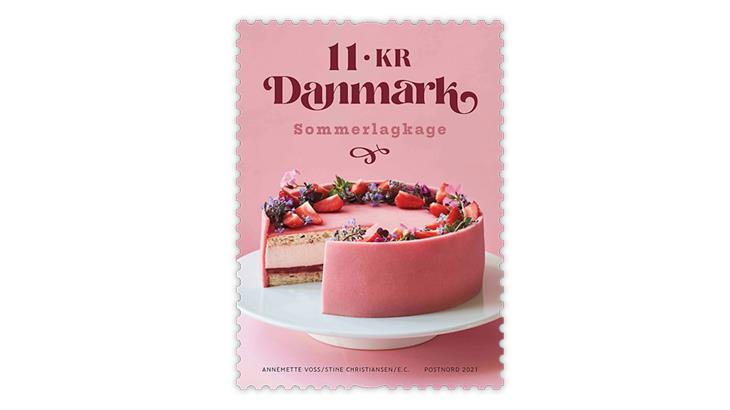 The association was founded in 1894 to promote Luxembourg fruit, and a basket of this fruit is pictured on the stamp.

The stamp design, which reproduces a photograph by Anne Lommel Photography, also shows bottles of fruit juices and jars of fruit preserves or jam.

Although Luxembourg Post does not list the specific fruit shown on the stamp, it does mention that apples, pears, grapes, plums, Mirabelle plums, quinces, cherries, various berry varieties, rhubarb and nuts are grown locally.

The stamp was printed in Belgium by the Bpost Stamps Factory by offset. It is sold in panes of 10.

The order was established July 7, 1883, by Jules Meline, who was minister of agriculture at the time, to reward services rendered to agriculture.

The website of the agricultural department of the French Embassy in Washington, D.C., explains that this order rewards “those persons — both French and foreigners — who have made noteworthy contributions to French agriculture,” adding “Regulated by the France’s Ministry of Agriculture, this prestigious order consists of three levels or ‘grades’ — Chevalier (Knight), Officier (Officer) and Commandeur (Commander) bestowed upon professionals who promote and elevate French Agriculture through their work in any of the different agricultural sectors: Forestry, Fishery, Horticulture, the Agrifood industry, Ecology, etc. …

“Recipients of all levels of the Merite Agricole receive a diploma signed by the current minister of Agriculture as well as a medal that is traditionally conferred by a minister or agricultural counselor during an official decoration ceremony.”

The medal is pictured on the right side of the stamp. The main part of the design shows Sandrine Chimbaud’s illustration of a father and daughter looking out over the French agricultural landscape with a plate of fresh food in the center.

Philaposte printed the stamp by gravure. The stamp is sold in panes of 12 with additional images related to agriculture and food in the perforated selvage, including bread, a fork, a chicken and a chef’s hat.

Upcoming stamps from Alderney will take an artistic look at fruits and vegetables in conjunction with 2021 as the United Nations’ International Year of Fruits and Vegetables.

Palmeri said, “These are the first set of stamps I have worked on and it is an overwhelming feeling to know that my artwork could be seen around the world.”

Cartor Security Printing is printing the stamps by offset lithography. They will be available in panes of 10.

A stamp in Spain’s Tourism series pairs wine and tourism.

Spain’s Correos described this €1.60 stamp issued Jan. 18 as reflecting “the wine tourism experience through the enjoyment of the landscape, the grapes and the grape leaves, and the tasting of a glass of wine in the middle of nature.”

Inscribed in large letters in the center of the design are the Spanish words for tourism (turismo) in three lines and enology (enologico), which is the science and study of winemaking.

According to a press release from Correos, “Spain is one of the world’s leading tourist destinations, its gastronomy being one of its main attractions. The production and export of wine and its approximately one million hectares of cultivated vineyards (15% of the world total) make it the largest vineyard in the world. All this means that Spain is considered by the Global Wine Tourism Organization [in Spanish Organizacion Mundial del EnoTurismo] (OMET) as ‘the country of wine tourism.’”

A €1.50 stamp issued at the same time promotes spa-related tourism.

Spain’s royal mint and security printer, FNMT-RCM, printed the stamps by offset in separate sheets of 50.

Denmark brings the dessert on a set of five stamps reproducing photographs of cakes created by Annemette Voss Fridthjof, the 2013 winner of the competition on the Danish television show Den Store Bagedyst (The Great Baking Contest).

Stine Christiansen photographed the five cakes. According to information from Postnord, they are a chocolate cake with lime frosting, a citrus cake with vanilla, meringue cakes with apricot and licorice, a raspberry torte with pistachio, and a summer layer cake topped with fruit.

Postnord includes links to the recipes in Danish on its website.

The stamps were issued Jan. 4 in a booklet of 10 (two of each design). Each stamp is denominated 11 krone, the basic domestic rate.