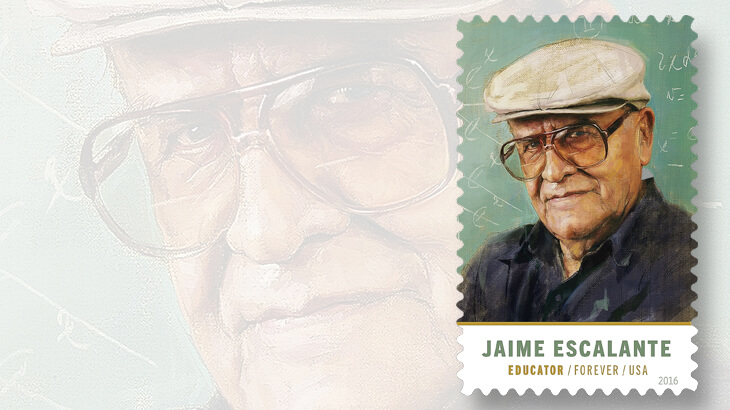 High school teacher Jaime Escalante will be honored on a forever stamp to be issued July 13. Escalante’s success at teaching at-risk students became the subject of a 1988 motion picture.

His successful and unorthodox approach to teaching at-risk high school students in California made Bolivian-born Jaime Escalante a legend among American educators.

The United States Postal Service will honor Escalante July 13 on a nondenominated (47¢) forever stamp in a pane of 20. The stamp will also be offered in a die-cut press sheet of nine panes (180 stamps) for $84.60, with 1,500 sheets available.

The Jaime Escalante stamp will be issued during an 11 a.m. ceremony at the Washington Hilton, International Ballroom East, 1919 Connecticut Ave. NW, Washington, D.C.

The Postal Service recommends that those planning to attend the event use the T Street NW entrance and take escalators down to the terrace level.

The ceremony is being held in association with the League of United Latin American Citizens national convention and exposition. USPS Network Operations Vice President Robert Cintron is the scheduled dedicating official.

The new stamp features a portrait of Escalante created as a digital illustration by artist Jason Seiler. It is based on a photograph taken May 6, 2005, by Escalante’s son, Jaime W. Escalante, in the classroom at Hiram Johnson High School in Sacramento, Calif., where Escalante once taught.

Calculus formulas are visible on the chalkboard behind Escalante.

Jaime Escalante was born Dec. 31, 1930, in La Paz, Bolivia, the son of two schoolteachers. He began teaching math when he was 22, and studied education in the United States as part of President John F. Kennedy’s Alliance for Progress program.

After moving to the United States in 1963, Escalante had to return to school and earn a U.S. teaching degree.

In 1974, he was hired at Garfield High School in East Los Angeles, a school Escalante described as being “in bad shape” when he began there, with frequent fighting and high dropout rates.

“Using a variety of unusual methods — bonding with students over their shared love of the Lakers basketball team, dressing as a chef and using cooking as a way to teach percentages, competing against his students in sporting events and teasing them about their habits and tastes — he tried to motivate his students not only to attend class, but also to learn,” the Postal Service said in announcing the stamp.

The methods used by Escalante and principal Henry Gradillas turned the struggling school around. Escalante challenged his students and began offering calculus instruction to prepare them for college.

Questions arose in 1982 about the results of advance placement calculus exams taken and passed by some of Escalante’s students. Under strict monitoring, the same students were retested with a different exam, and all passed again.

National news coverage of the testing controversy and Escalante’s motivational teaching methods led to a 1988 motion picture, Stand and Deliver, directed by Ramon Menendez. Edward James Olmos starred as Escalante, and received an Academy Award nomination for his portrayal.

Escalante later taught at Hiram Johnson High School, and retired from the classroom in 1998.

He received the 1988 Presidential Medal for excellence in education from President Ronald Reagan, and was inducted into the National Teachers Hall of Fame in 1999.

Escalante died in 2010 after a long battle with cancer.

Many of the students Escalante taught over the years carried their classroom successes into the real world after graduation.

A 2010 NBC News report by George Lewis included an interview with Erika T. Camacho, a student of Escalante’s who earned a Ph.D. in applied mathematics at Cornell University and is now an associate professor in the School of Mathematics and Natural Sciences at Arizona State University.

“The impact that he had in my life, and in the life of all his other students, is like a domino effect,” Camacho said. “It’s not going to stop here; it’s going to go through many generations, and it’s going to impact a lot of people.”

Standard ordering instructions apply. Collectors requesting first-day cancels are encouraged to purchase their own stamps and affix them to envelopes. The first-day cover envelopes should be addressed for return (a removable label may be used), and mailed in a larger envelope addressed to Jaime Escalante Stamp, Special Events, Box 92282, Washington, DC 20090-2282.