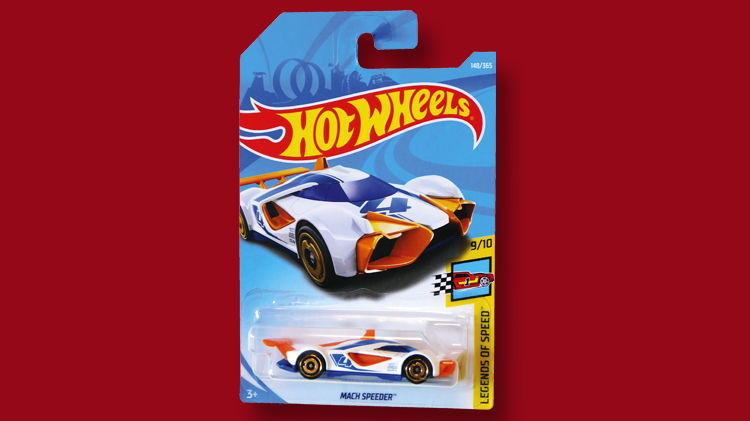 Hot Wheels cars are sold in hanging packaging in many retail stores. This 2018 model is the Mach Speeder pictured on one of the 10 commemorative stamps. 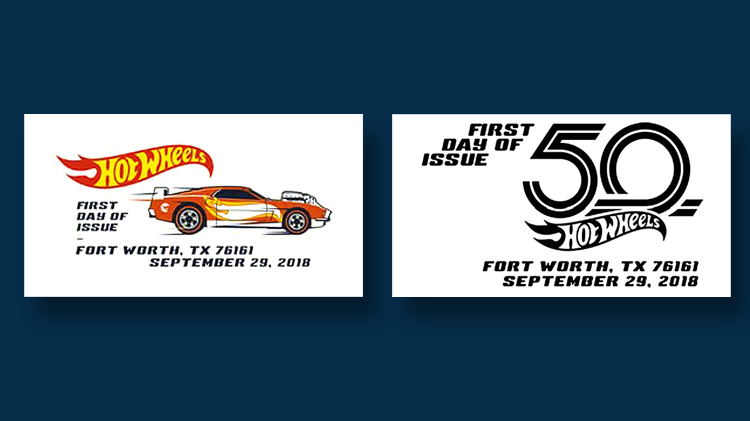 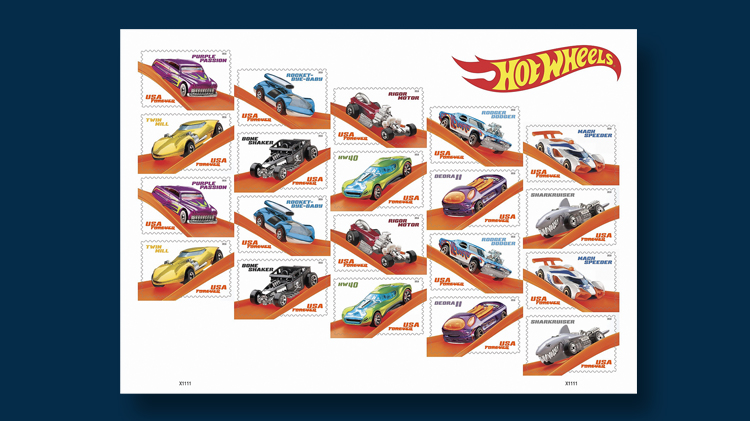 The pane of 20 Hot Wheels stamps (10 designs) includes the logo of the toy car line. The issue date is Sept. 29.
Previous
Next

The Mattel toy company is celebrating the 50th anniversary of its famous Hot Wheels die-cast model cars, and the United States Postal Service is joining in with a set of 10 different Hot Wheels forever stamps.

Each stamp features one of 10 cars from the past half-century of Hot Wheels, including the 1969 Twin Mill (“one of the most iconic Hot Wheels cars of all-time,” according to the Postal Service), and the 2018 Mach Speeder (“built to look like a predatory fish”). The name of the respective car model is printed on each stamp.

The stamps are arranged on the pane in four diagonal rows of five stamps each, with narrow selvage separating the die-cut edges of each stamp. The Hot Wheels flames logo is prominent in the upper right corner of the pane selvage.

Apparently anticipating high demand for these stamps from stamp collectors, postal customers and Hot Wheels fans, the Postal Service has ordered a printing of 100 million stamps, more than twice the average of 40.76 million for U.S. forever commemorative stamps issued to date in 2018.

Only the Scooby-Doo forever commemorative (Scott 5299), issued July 14 with a print run of 252 million, was printed in larger numbers.

The Postal Service did not provide any additional ceremony details prior to this issue of Linn’s going to press, including whether or not ceremony attendance requires a ticket purchase for the Nationals event at the speedway.

The Postal Service noted that collectors can view the ceremony live online at www.facebook.com/USPS.

“Hot Wheels was born when Mattel co-founder Elliot Handler challenged his design team, which included a General Motors car designer and a rocket scientist, to create a toy car that was cooler and performed better than anything on the market,” according to the Postal Service.

“Since the inception of Hot Wheels, Mattel has produced thousands of varieties of cars. In 2011, Hot Wheels was inducted into the National Toy Hall of Fame. Today, children and their parents still love racing the eye-poppin’, colorful, lightning-fast cars.”

Hot Wheels were introduced in May 1968 with a Custom Camaro model, followed soon after by 15 additional vehicles, a group known to collectors as the “original sweet 16.”

The cars are scaled at roughly 1:64, though the ratio varies with individual models.

Hot Wheels are readily available in a wide range of retail stores, most often in hanging packaging that encases the vehicle in a compartment of clear plastic affixed to a colorfully printed card backing.

Hot Wheels cars today are identified by subcategories and numbering, as well as distinctive names for each model. Cars in the standard line usually sell for $1 or less in retail stores, though certain coveted varieties increase in value in the aftermarket.

The Postal Service provided descriptions of each vehicle featured on the new stamps.

The black postmark shows an iteration of the 50th anniversary logo, with the numerals composed to look like Hot Wheels track.

The color postmark includes the standard Hot Wheels logo in color, along with the image of an orange muscle car with painted flames on the side, an exposed engine and rear spoiler.