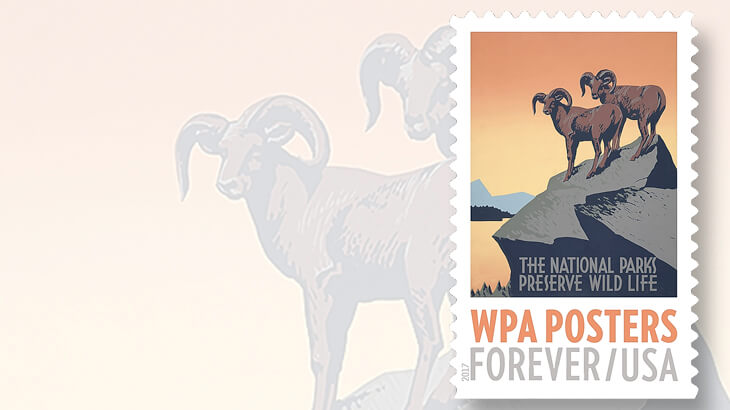 A new United States forever stamp promoting national parks, from the upcoming set of 10 WPA posters stamps that will be issued March 7. 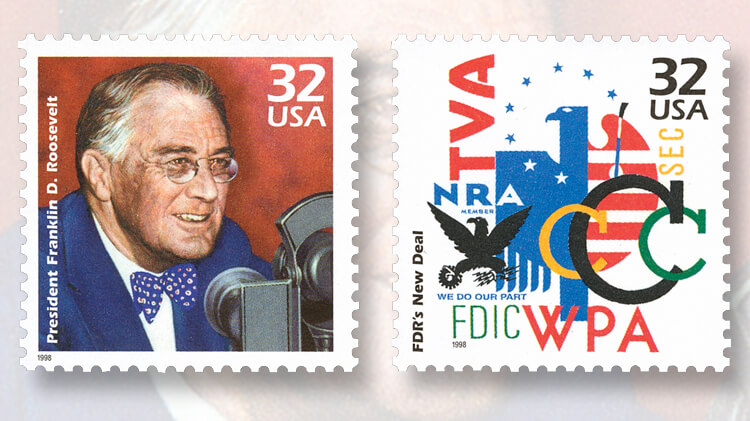 Two 32¢ stamps issued Sept. 10, 1998, as part of the Celebrate the Century set commemorating the 1930s depict President Franklin D. Roosevelt and the New Deal programs (including the WPA) developed during his administration. 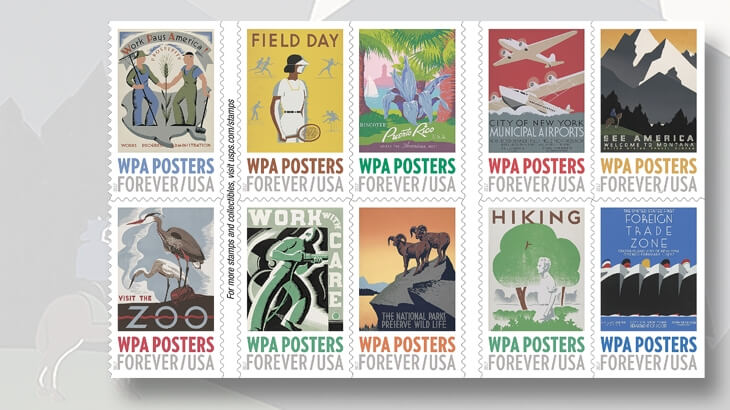 A colorful set of 10 stamps displaying posters and artwork of the 1935-43 Work Projects Administration will be issued March 7 in a double-sided pane of 20. Each stamp is included twice in the pane.
Previous
Next

The United States Postal Service will issue a set of 10 nondenominated (49¢) forever stamps March 7 that feature artwork from 10 different posters created in the 1930s.

Eighty years ago, the United States was in the grip of the Great Depression, which began with the stock market crash of 1929 and continued throughout the 1930s. Americans lost their savings when banks collapsed and unemployment soared.

President Franklin D. Roosevelt was elected in 1932 and initiated a series of fiscal programs designed to right the American economy.

One of these was the Works Progress Administration, later renamed the Work Projects Administration, which employed some eight and a half million people, with some constructing and repairing roads, bridges, and airports.

Artists and writers were also employed by the WPA, and some were asked to create posters with designs promoting theater performances, public health concerns, photograph exhibitions, safe driving habits, and much more. These projects were undertaken in 17 states and the District of Columbia.

These new stamps display some of the artwork created by artists employed by the Poster Division of the WPA Federal Art Project.

The stamps will be issued in a double-sided pane of 20, which the Postal Service describes as a booklet.

An 11 a.m. first-day ceremony is planned for the Franklin D. Roosevelt Presidential Library and Museum, 4079 Albany Post Road, Hyde Park, NY 12538. It is unknown at this time if the ceremony is open to the public.

“Each stamp features a vibrant example of the posters conceived and printed in workshops across the nation under the WPA.”

The Work Projects Administration ended its activities in 1943, when “the function of its Federal Art Program Poster Division had been fully absorbed into the World War II effort,” according to the Postal Service.

The WPA created some 2 million posters in all, mostly silkscreened.

The designs for the stamps were obtained from posters in the extensive collection of the Library of Congress Prints and Photographs Division, which can be viewed at www.loc.gov/pictures/collection/wpapos. Click the link for “View All” or enter in a search subject.

The 10 subjects on the new stamps (and artist information, where available) are:

“Work Pays America!” (artist Vera Bock), with a farmer and a laborer clasping hands and the word “Prosperity” over growing wheat. “Works Progress Administration” is printed at the bottom of the poster.

“Field Day,” showing a woman holding a tennis or badminton racquet, and four background silhouettes engaged in other sporting activities. “W.P.A. Recreation Project District No. 2” is lettered near the bottom of the poster.

“Discover Puerto Rico U.S.A., Where the Americas Meet” (by Frank S. Nicholson) with tropical plants in the foreground and a sailboat gliding by a distant structure.

“See America, Welcome to Montana” (by Martin Weitzman) with mountains and trees, plus an individual on horseback. Text along the bottom of the poster reads, “United States Travel Bureau.”

“Visit the Zoo,” a simple poster with two herons against a gray background.

“Work with Care” (by Robert Muchley) includes a laborer driving a steam drill with machinery behind him.

“The National Parks Preserve Wild Life” (J. Hirt) depicts a pair of bighorn sheep on a rocky peak against an orange sky. “Department of the Interior, National Park Service” is lettered across the original poster.

“Hiking” (signed “Beard”) simply shows a man with rolled-up shirt sleeves walking through a park setting. The poster has “W.P. A. Recreation Project- Dist. No. 2” lettered along the bottom.

An undisclosed quantity of die-cut press sheets consisting of eight unsevered panes are also available for purchase for $78.40.

Technical details and first-day cancel ordering information for the WPA Posters stamps can be found below.

Standard ordering instructions apply. Collectors requesting first-day cancels are encouraged to purchase their own stamps and affix them to envelopes. The first-day cover envelopes should be addressed for return (a removable label may be used), and mailed in a larger envelope addressed to FDOI-WPA Posters Stamps, USPS Stamp Fulfillment Services, Cancellation Services, 8300 NE Underground Drive, Suite 300, Kansas City, MO 64144-9900.

Requests for first-day cancels must be postmarked by May 7.