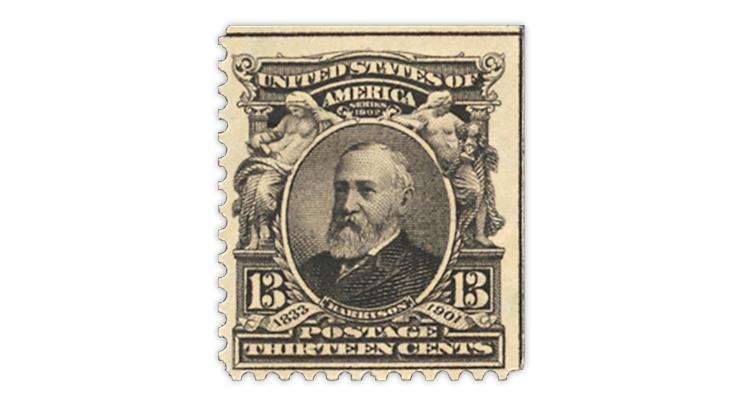 Figure 1. Issued in November 1902, the 13¢ Benjamin Harrison stamp was the first United States stamp with that denomination and the first in a definitive series featuring intricate designs by Bureau of Engraving and Printing designers. 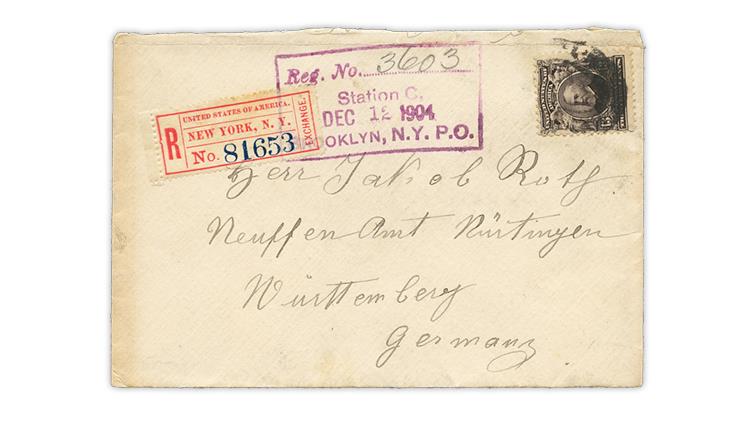 Figure 2. This 1904 cover from Brooklyn, N.Y., to Wurttemberg, Germany, bears a 13¢ Benjamin Harrison stamp paying the 5¢ international postage plus 8¢ registration.
Previous
Next

Modern United States stamps may be diverse in subject matter, design and color, but earlier U.S. stamps have a charm all their own. And if you have access to a good philatelic library, it is fun to look for older philatelic periodicals that discuss the new issues of their time.

Following is a report from the Nov. 1, 1902, issue of the Metropolitan Philatelist published by J.W. (John Walter) Scott in New York City; the price was “1 CENT per copy.” The report appears in the Washington Notes column signed by “The Optimist”:

“It keeps a correspondent busy these days to maintain the pace set by the Bureau of Engraving and Printing. The artists and engravers have of late been getting a swift hustle on themselves with the result that rapid progress is being made upon designs and dies. It seems likely now that half a dozen stamps of the new series will be in the hands of the public before the first of January.

“I was accorded the honor of viewing one of the first sheets of the new thirteen cents stamps which came from the press in company with the genial director of the Bureau, Capt. W.M. Meredith. The stamp has been described in detail in these notes and there seems to be nothing more to add save to say that a completed sheet of a new design of stamps presents a most wonderful and delightful appearance to the individual who loves postage stamps. I feel perfectly safe in saying that stamp collectors and the general public will be greatly pleased with the new stamps. They show up fully as well up-on the regular stamp paper as they did in the die proof.

“It will be of special interest to collectors to know that the Department at the last moment decided upon a change in color. It had been determined to print the thirteen cents stamp in a slate color. Proofs in this shade where made but for some reason the design did not seem to come out in good shape and experiments were made with other shades approximating a slate.

“The color finally decided upon is a sort of mauve. Without having an opportunity to compare the shade with any other now in use, I should say that the color very nearly matches that of the current eight cents stamps [the 8¢ General Sherman of the 1894 issue]. Probably there is a trifle more red in it than the eight …

“Then new stamps had none of them been gummed when I saw them, in fact but few had been printed on Wednesday of this week and the sheet I examined was still damp. The stamps will be printed in sheets of four hundred, as usual, having eight plate numbers to the sheet, two on each quarter; top or bottom and sides. The number of the first plate used was 1474.”

Designs of the 1902 definitive series, also known as the Second Bureau Issue, were detailed and intricate. While perhaps they are not to our taste today, they were very much in the style of the times. As a representative of the engraver’s art, the series of 14 stamps is an impressive achievement.

The 13¢ Benjamin Harrison was the first stamp of that value to be issued by the United States. It specifically was issued was to pay the 5¢ rate of international postage plus the 8¢ registry charge. It was also the first stamp of the new definitive series to be released.

More than 31 million 13¢ Benjamin Harrison stamps were printed using eight plates, but proper use on cover is not often seen these days. Figure 2 shows an example of a solo use on a registered cover to Germany.

The Bureau of Engraving and Printing called the color of the stamps “dark slate,” while the philatelic press of the time called it “brownish purple.” Today Scott lists the stamp as “purple black” and “brown violet” as a variety.

The catalog value in the 2021 Scott Specialized Catalogue of United States Stamps and Covers of the 13¢ Benjamin Harrison stamp is $40 unused, $10 used and $37.50 on cover.