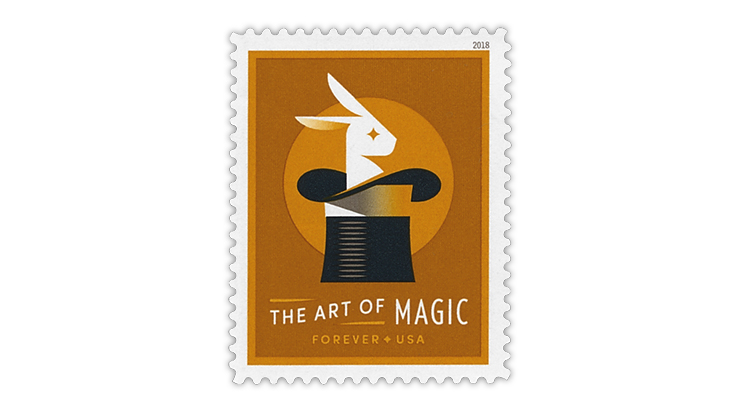 Figure 1. The Art of Magic issue of 2018 includes this forever stamp featuring the classic magic trick of pulling a rabbit out of a hat. The stamp is one of a set of five issued in panes of 20. 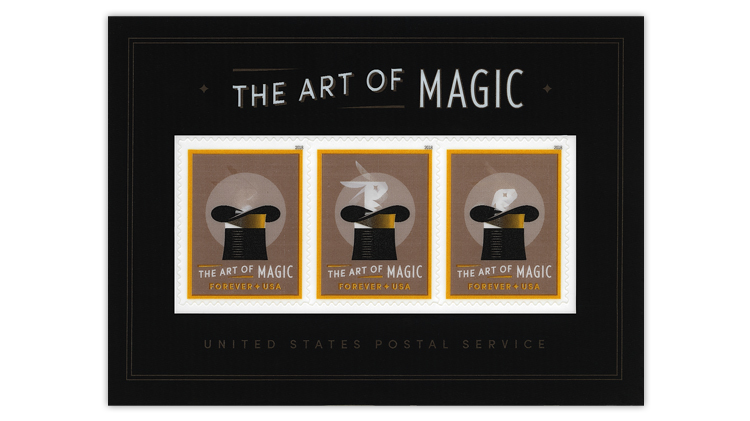 Figure 2. The Art of Magic souvenir sheet was printed with a lenticular effect, causing the rabbit shown on the stamps to appear and disappear. 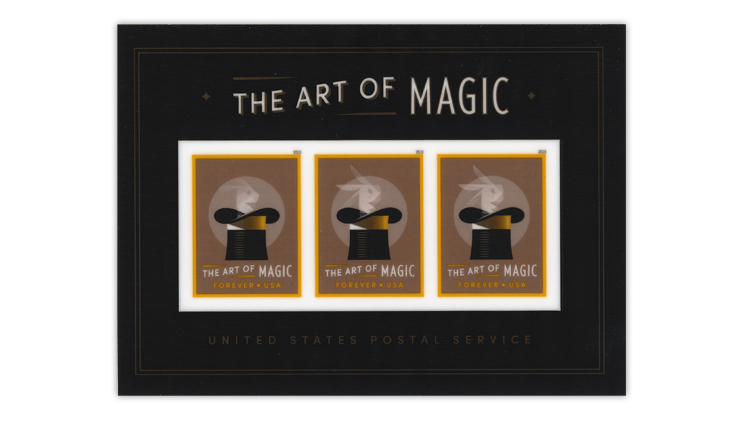 Figure 3. More than 70 The Art of Magic souvenir sheets without die cuts were purchased at the United States Postal Service booth at the 2018 American Philatelic Society Stampshow in Columbus, Ohio. 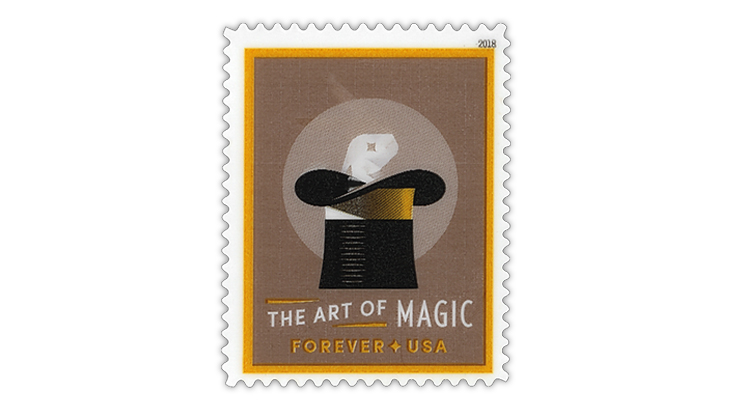 The cartoon caption contest image for February is the disappearing Rabbit in Hat stamp from the 2018 Art of Magic souvenir sheet. Entries must be received by Feb. 28 for a chance to win a prize. The rules are in the accompanying article.
Previous
Next

The United States Postal Service’s 2018 The Art of Magic issue includes two different forever stamps featuring the same trick: pulling a rabbit out of a hat.

One stamp was issued in a pane of 20 (Scott 5301), shown in Figure 1, and the other in a souvenir sheet of three (5306), Figure 2. The rabbit appears to disappear on the stamps in the souvenir sheet, but not on the pane version.

In announcing the souvenir sheet, the United States Postal Service said: “The Art of Magic souvenir sheet will feature three identical stamps that show a white rabbit in a black hat. By rotating each stamp, you can see the rabbit ‘pop’ out of the hat.”

Over the years the Postal Service has experimented with security devices to foil counterfeiting, which also tend to make stamps more interesting. One of these, lenticular printing, was used to produce The Art of Magic souvenir sheet.

This was the first time that the USPS used lenticular printing, but not the last. It also was used on the 2019 Tyrannosaurus Rex stamps (Scott 5410-5413).

This printing method on The Art of Magic souvenir sheet allows the rabbit to disappear and reappear when the sheet is tilted to a light source.

Security features like this are urgently needed because Linn’s readers may know from the many reports in the last few years about modern counterfeited U.S. stamp designs.

Some of the most obvious security features, such as lenticular printing, are too expensive to be used on all U.S. stamps. Still, when used, they make U.S. stamps more attractive to new collectors, and that is certainly a positive.

The disappearing Rabbit in Hat stamp is a natural for the February cartoon caption contest.

For the contest, put yourself in the top hat as the bunny and tell me what you think the rabbit is thinking or saying about the magic trick, the stamp, stamp collecting, postal policy, politics, or anything else that appeals to you.

For each winner, the prize will be a 13-week subscription to Linn’s (a new subscription or an extension). Entries must reach me no later than Feb. 28.

Just a few days after the Art of Magic souvenir sheet and five stamps (5301-5306) were issued Aug. 7, 2018, in Las Vegas, Nevada, an error version of the souvenir sheet with all the die cuts omitted (5306b) surfaced at the American Philatelic Society Stampshow 2018 in Columbus, Ohio. An error souvenir sheet is pictured in Figure 3.

Improbable as it might sound, these error souvenir sheets were purchased at the USPS booth at the show. And to make the story even more unusual, the person who bought the majority of them was professional stamp dealer Jim Lee of Oak Brook, Ill.

I am not suggesting anything shady here — quite the contrary. If there is anyone more likely to look carefully at a stamp purchase than a stamp dealer, I can’t think of who that would be.

Lee noticed the discrepancy the moment he looked at the first sheet he had bought, and then he purchased the remaining 30 sheets from the deck of 100.

A customer in line with Lee also bought one of the error sheets from the USPS booth.

Another customer had purchased 10 of the souvenir sheets, only to discover that he had an error. Those were sold at the show to a different dealer.

It is not known if all of the souvenir sheets in the deck of 100 were imperf, but another 30 imperf examples were reported to Linn’s after the show. This brings the total reported to more than 70 error sheets.

Lee told me that as word of the error began to seep out at the show, the Postal Service booth rapidly sold out of these souvenir sheets. More were ordered and when delivered, the USPS staff discovered that a large quantity was imperf. The Postal Service employees inspected the entire shipment and did not sell any more of the deficient sheets.

I have heard of no examples of this error purchased from other USPS outlets. I’m certain the Stamp Fulfillment Services’ underground center in Kansas City, Mo., nicknamed “the caves,” and other retail outlets were instructed to inspect their stocks before filling orders.

Linn’s editor-in-chief Jay Bigalke ordered an entire deck of the souvenir sheets. When he received it, the cellophane wrapping was slit open, indicating that the sheets had indeed been screened for errors.

Linn’s heard that the USPS destroyed multiple decks of the error.

With the relatively low numbers in philatelic hands, the error souvenir sheets have been selling at auction and directly from dealers at roughly $1,000 each.