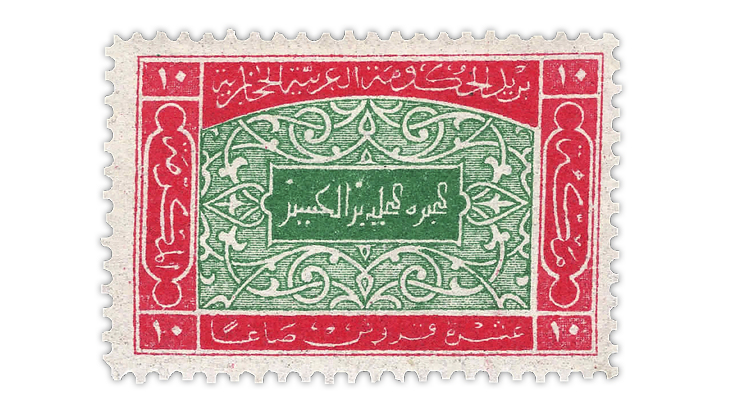 The 10pi red and green basic stamp is the only denomination from the Saudi Arabia King Ali issue stamp set that is listed in the Scott catalog without an overprint. Learn why in this month's Middle East Stamps column.

The June 24 issue of Linn’s Stamp News just landed on the presses and goes in the mail to subscribers Monday, June 10. And if you subscribe to Linn’s digital edition, you’re at the head of the line with early access Saturday, June 8. Here are three stories you won’t want to miss.

Ghassan Riachi, in this month’s Middle East Stamps column, takes a closer look at the 1925 Hejaz 10-piaster King Ali stamp without overprint. In fact, this is the only stamp in the King Ali issue without an overprint. His explanation is both entertaining and illuminating.

In Journal Entries, Linn’s editor Michael Baadke takes you on a tour of the May-June issue of Postal Stationery, the official journal of the United Postal Stationery society. He focuses on an article detailing the United States 1992 Consular Service Bicentennial stamped envelope.