The forgotten man behind the 1969 Beautification issue 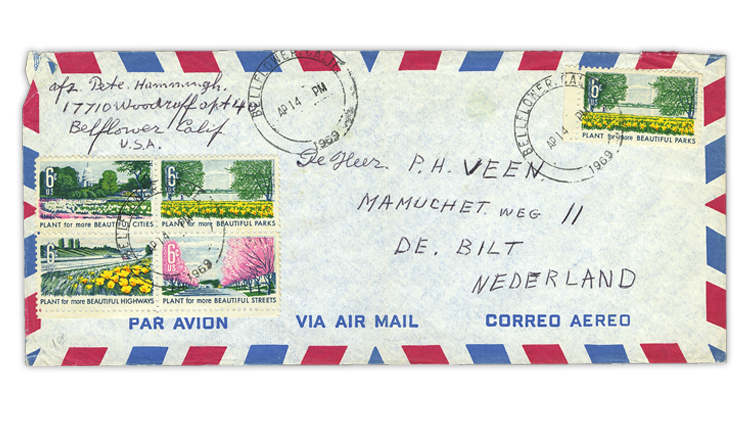 Figure 1. The block of four 1969 6¢ stamps on this 1969 airmail cover from California to the Netherlands was based on photographs taken in Washington, D.C., by White House photographer Robert Knudsen. These four Beautification of America stamps were issue 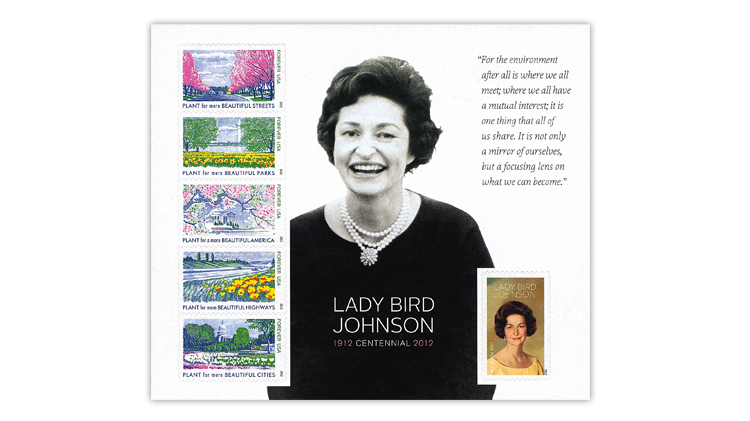 Figure 2. The Lady Bird Johnson pane of six issued in 2012 includes forever versions of the four 1969 Beautification of America stamps, plus a similar 1966 stamp and a new stamp showing a portrait of Mrs. Johnson.
Previous
Next

In the U.S. Stamp Notes column in the Oct. 29, 2018, issue of Linn’s, I wrote about the 1969 6¢ and 2012 forever stamps that celebrated Lady Bird Johnson’s outdoors beautification efforts when she was first lady.

The block of four se-tenant Beautification of America stamps was issued Jan. 16, 1969 (Scott 1368a). On the airmail cover to the Netherlands shown in Figure 1, the block is in the lower left.

The cover, sent April 14, 1969, from Bellflower, Calif., also bears a single stamp from the block in the upper right. The five 6¢ stamps, totaling 30¢, overpaid the then-current 20¢ airmail rate to Europe.

According to the Scott Specialized Catalogue of United States Stamps and Covers, Walter DuBois Richards designed the four stamps, but there is no information about his inspiration.

After reading my Oct. 29, 2018, column, Mildred Barylski wrote to me saying that she had stumbled upon the fact that the husband of a friend had taken photographs that were used as source material for the illustrations on the Beautification of America stamps.

His obituary published in The New York Times, the Los Angeles Times and other newspapers listed some of Knudsen’s photographic credits: the 1948 and 1952 elections of presidents Harry S. Truman and Dwight D. Eisenhower, the 1959 meeting between Eisenhower and Soviet leader Nikita Khrushchev, 18-month-old John Kennedy Jr. (John-John) walking in the Oval Office in May 1962, the autopsy of slain President John F. Kennedy in 1963, President Richard Nixon’s 1974 farewell, and the White House weddings of Lynda and Luci Johnson and Tricia Nixon.

Somewhere along the way, he took the pictures of Washington, D.C., scenes that were immortalized on the Beautification of America block of four. But source photographers are not routinely given credit when their work becomes a stamp.

However, the Los Angeles Times did report in his obituary that “Several of his Washington scenes were imprinted on the U.S. Postal Service’s 1969 beautification stamps.”

Knudsen was born in Storm Lake, Iowa, and graduated from high school in Omaha, Neb., in 1944. He was first in his graduating class at the Naval Photographic School in Pensacola, Fla., in 1946, and that same year he was assigned to the White House, where he worked for 28 years.

How did Barylski learn of Knudsen’s involvement with the stamp designs? She said: “I saw a plate block of the stamps in a frame, hanging on the wall at a friend’s house. I asked her about them, and she said her late husband had taken the photographs. A Google search of his name confirmed his critical contribution.”

The four stamp designs made their second appearance on the Lady Bird Johnson pane of six issued Nov. 30, 2012 (Scott 4716). This pane, shown in Figure 2, celebrates the 100th anniversary of her birth and includes two other forever stamps: One shows her official White House portrait, and the other reproduces the design of a 1966 5¢ Beautification of America stamp.