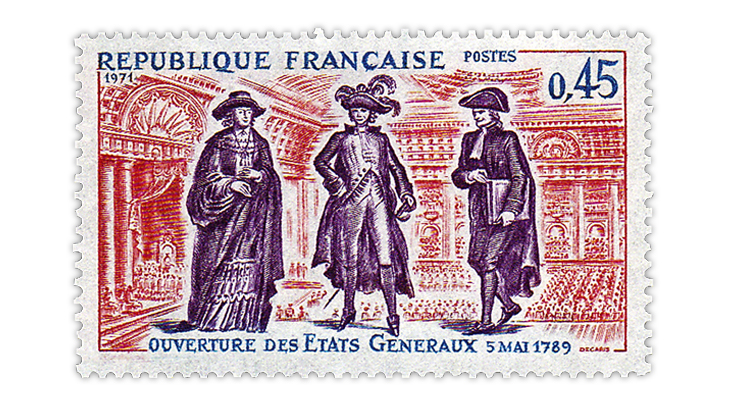 Philately of France columnist Larry Rosenblum explores the French Revolution. This 1971 stamp, part of a series on the history of France, recalls the opening of a representative assembly called the Estates-General just before the beginning of the French R

The June 17 monthly issue of Linn’s Stamp News just landed on the presses and goes in the mail to subscribers Monday, June 3. And if you subscribe to Linn’s digital edition, you’re at the head of the line with early access Saturday, June 1. Here are three stories you won’t want to miss.

“The French Revolution and subsequent Napoleonic Era, from 1789 to 1815, created the modern nation-state and spread political and social reforms across Europe.” So begins Philately of France columnist Larry Rosenblum’s artful exploration of the French Revolution. Be sure to read it all.

Formal registry service began in the United States in 1855. Prior to that, postmasters used manuscript and other markings to indicate that a piece of mail was registered. As Labron Harris explains in Classic U.S. Postal History, these nascent indicators of registration are scarce and desirable.

In Covering the World, Ken Lawrence elucidates how a green label affixed to a 1988 cover from East Germany to the United States was used to facilitate the trading of stamps between East German and foreign collectors. It’s a marvelous philatelic peek behind the Iron Curtain.