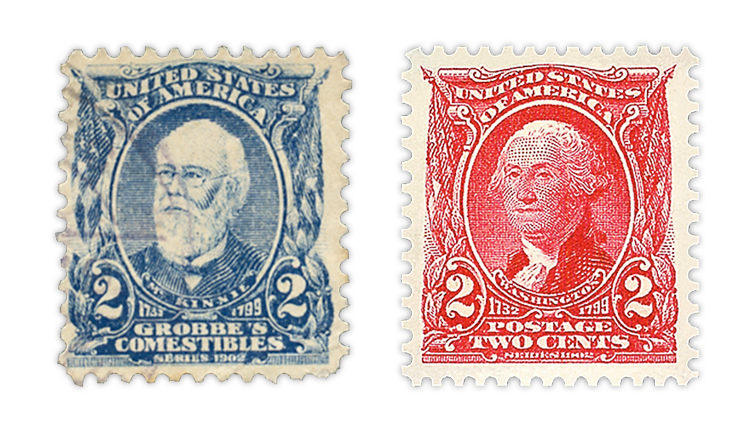 The 1903 2¢ carmine Washington is almost matched by the imitation next to it produced by persons unknown to publicize Grobbe’s Comestibles.

If at first glance the 2¢ gray stamplike label shown here looks familiar, it is because the frame, the portrait and the arrangement of the text mimic the genuine 2¢ carmine Washington stamp (Scott 301) also shown here. The Washington stamp was issued in 1903 as part of the Second Bureau Issue.

The color is not the only difference between the two stamps. The central design of the gray cinderella stamp shows a portrait of a man who is identified as either “Mr. Kinnie” or “McKinnie.” Under the portraits are the dates 1732 and 1799, probably the dates of his birth and death.

Presumably he is the founder of “Grobbe’s Comestibles”, the inscription beneath the dates.

With the march of time, some words go out of fashion, and “comestibles” is a word seldom heard anymore. It is a word from Middle French, and it came to mean “edibles” in English — another word that has all but disappeared today. However, I think we can classify Grobbe’s Comestibles as a food store.

I am sure there is an interesting story behind this look-alike, but the only thing I know is that someone took a great deal of care in producing it.

Also it is so similar to stamps of its time that the Secret Service could not have been pleased. It would have been ripe for seizure as a stamp forgery.

If you can shed any light on this production, please drop me a line by email at jmhstamp@verizon.net, or write to John Hotchner, Box 1125, Falls Church, VA 22041-0125.