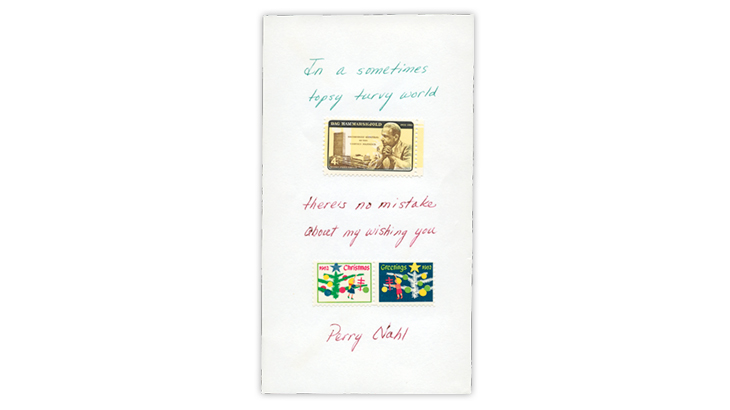 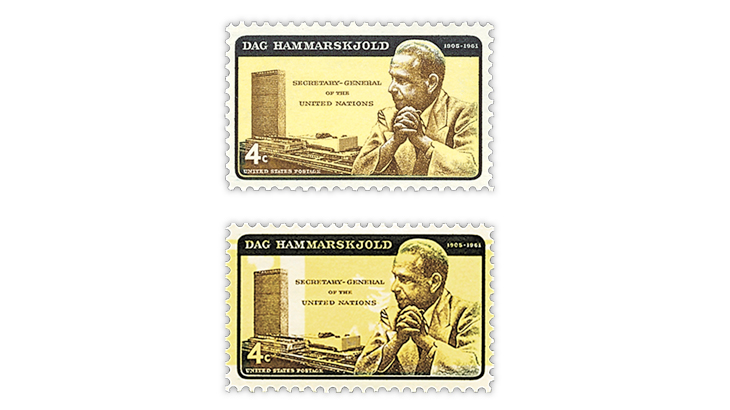 I am a fan of clever philatelic Christmas greetings, so I enjoyed finding the homemade greeting card from well-known stamp collector Perham (“Perry”) Nahl that is shown here in Figure 1.

Nahl (1909-88) was an outstanding researcher on aerophilatelic subjects and a longtime officer and active member of the American Air Mail Society, which he joined in 1927.

The centerpiece of Nahl’s Christmas greeting, which was mailed Dec. 16, 1962, is the special printing of the 4¢ Dag Hammarskjold stamp with the yellow background inverted (Scott 1204).

Shortly after the stamp was issued, Leonard Sherman of Irvington, N.J., discovered a pane of 50 with the yellow inverted. Other examples of the invert also were found.

The Post Office Department decided to reprint the error so every collector who wanted one could buy it at face value. This, of course, ruined the value of the original find and sent the philatelic community into a tizzy. If the POD wanted to create buzz and increase its revenue, it was not disappointed.

You would think that the special printing inverts would be worth more today, but in the 2020 Scott Specialized Catalogue of United States Stamps and Covers both are priced at 25¢ (the catalog minimum) for a mint or used single, and $1 for a plate block.

So Nahl’s characterization in his Christmas greeting of a “topsy turvy world” using the invert is spot-on from several perspectives.

If you are motivated to mimic the Nahl method, you can still get Hammarskjold special printing inverts from stamp dealers who sell U.S. stamps at face value. Christmas seals also remain plentiful.