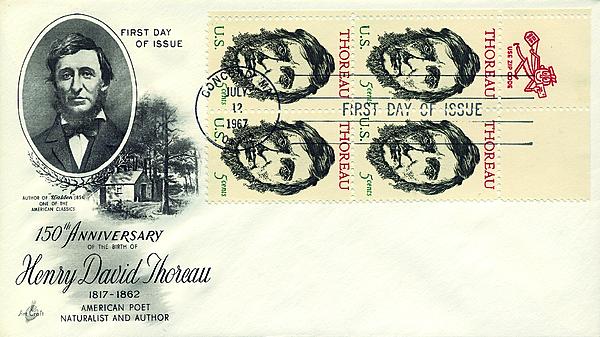 A ZIP block is affixed sideways to an ArtCraft cacheted first-day cover in 1967 for the 5¢ Henry David Thoreau stamp.

Chances are that modern first-day cover at the center of your collection wasn’t really canceled on the first day of issue.

Since January 1977, with the 13¢ Washington at Princeton stamp (Scott 1704), the United States Postal Service has offered servicers a grace period in which to purchase stamps, affix them to covers, and submit them for postmarking. Initially, the grace period was 15 days. It expanded to 30 days with the States Birds and Flowers issue (Scott 1953-2002) in April 1982, and to 60 days in 2007.

Dealer-servicers registered with the USPS’s cancellation services have 120 days with a 30-day extension possible upon request.

Prior to 1977, servicers who could not visit the first-day city in person on the day of issue would mail covers to the designated post office. Postal personnel affixed the stamps and canceled them.

From 1997 on, much of the labor of affixing stamps to covers was delegated to collectors and dealers.

From the servicers’ point of view, they could get exactly the configuration and placement of stamps they wanted. Would a collector have affixed the 1967 5¢ Henry David Thoreau stamp (Scott 1327) ZIP block sideways as shown?

The expansion of the grace period from 15 days to 30 days came with a 50-stamp issue, for which more time was needed to affix stamps.

The first-day-of-issue hand cancel, also known as the rubber-composition cancel, is generally available at first-day ceremonies, but the machine cancel, a steel die hub, and digital color postmark almost never are.

Almost no post offices still have machine cancelers in operating condition, and few cancel mail at all. That is handled by regional centers.

The USPS often sells uncacheted FDCs with digital color postmarks and other first-day postmarks at ceremonies. These covers are canceled in advance.

Other countries have FDC servicing grace periods, too, and service their own covers both before and after the first day of issue.

The modern FDC, then, is more of a birth certificate. It records the day a stamp or stationery was put on sale.