The key stamp in the Ottoman Empire’s 1914 set 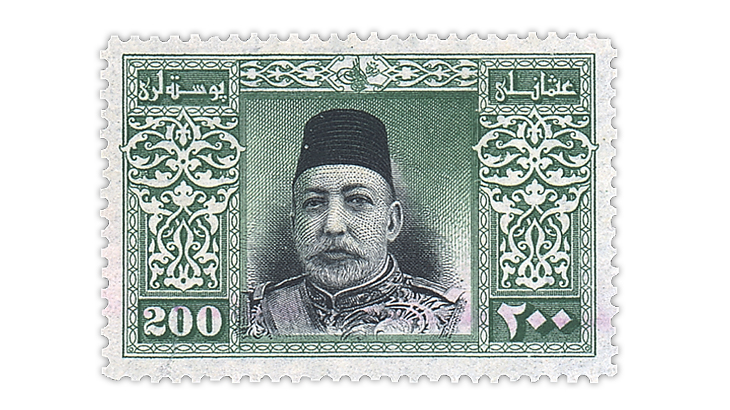 The Ottoman Empire in northwestern Asia Minor was founded in the 12th century. Its name is derived from Osman I, the empire’s first sultan.

From Anatolia the Ottoman Turks spread out, conquering the Asian Near East, southeastern Europe up to the gates of Vienna, Egypt and much of North Africa.

After the height of its power in the 16th century, the empire went into steady decline and by the 19th century was known as “the Sick Man of Europe.”

The Ottoman Empire joined the Central Powers in World War I, and following their defeat, the empire was abolished with nationalist Turks creating the modern state of Turkey in the Anatolian heartland.

The key and most beautiful set of stamps is the colorful pictorial set of 17 issued Jan. 14, 1914 (Turkey Scott 254-270). Several of the stamps are bicolor, and all show interesting scenes of the empire.

The Scott Standard catalog values the set at $785.25 in unused hinged condition.

However, most of the stamps are inexpensive, and the key high-denomination 200-piaster Sultan Mohammed V stamp (Turkey Scott 270) accounts for most of the catalog value: $550 in unused hinged condition and $400 in used condition with the value in italics.

If you get a good price on that stamp, you can easily fill in the rest of the set around it. The stamp is a good buy in unused lightly hinged condition and very fine grade in the $350-to-$450 price range.