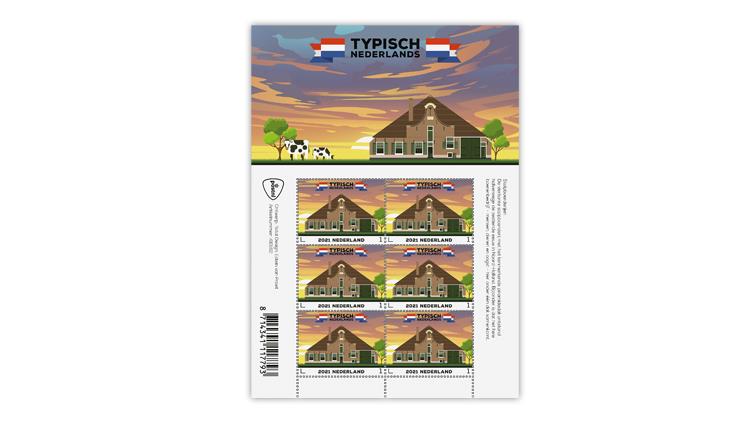 The Netherlands is featuring a type of farmhouse in North Holland on stamps in its Typically Dutch series. The stamps are being issued Jan. 4 in a pane of six. 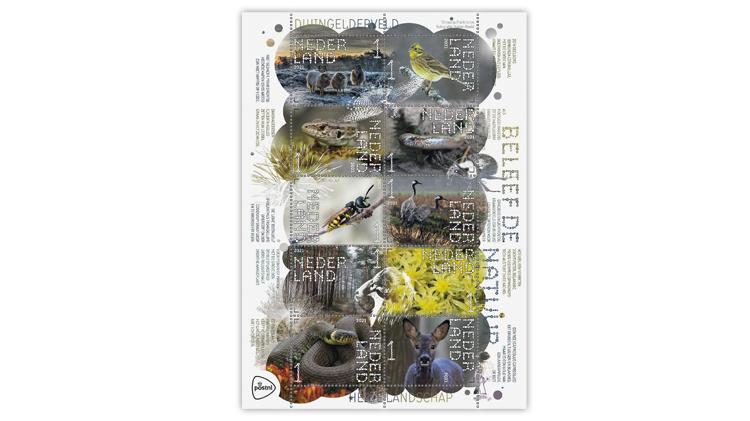 Also on Jan. 4, the Netherlands is issuing a new pane of 10 in its Experience Nature series. The stamps show flora and fauna of Dwingelderveld National Park.
Previous
Next

The Typically Dutch series began in 2020 with stamps featuring food that is typical of the Netherlands. In 2021 the stamps will focus on house types and facades, according to PostNL.

The nondenominated domestic-rate stamp issued Jan. 4 in a pane of six shows a square farmhouse with a pyramid-shaped, thatched roof. Called stolpboerderij, this type of farmhouse originated in North Holland in the 16th century and originally was used to shelter both a family and their livestock.

Edwin van Praet of Total Design in Amsterdam designed the new Stolpboerderij stamp using a photograph of a farmhouse in the village of Zuidoostbeemster taken by Ton van der Wal of Cultural Heritage Agency of the Netherlands. The farmhouse was built in 1742. It recently was converted into nine apartments.

The design shows the farmhouse at dawn on a windy morning, according to PostNL. A similar, larger image is depicted in the selvage above the stamps with added trees and grazing cows.

On the stamp, the name of the series, “Typisch Nederlands,” appears between two folded Dutch banners. At the bottom of the design starting on the left is a symbolic sorting hook, the year date, the country name and a “1.” The “1” shows that the stamp pays the domestic rate for letters weighing up to 20 grams. The rate is €0.96 as of Jan. 1.

According to PostNL, the black line above the aforementioned inscriptions “is a reference to the street level” and will appear on all stamps of the series.

The stamps were printed by four-color offset in France by Cartor Security Printing. The quantity printed was 75,000 panes of six.

PostNL launched its Experience Nature series in 2018. This year, the stamps in that series will depict plants and animals found in nature reserves in the Netherlands.

The pane of 10 stamps issued Jan. 4 highlights the flora and fauna of Dwingelderveld National Park.

On the park's website, the park is described as Europe’s largest wet moorland area. Located in the southwestern part of the province of Drenthe, it includes 3,700 hectares of heath land and woodland reserve.

All 10 stamps in the pane are nondenominated, paying the same domestic rate as the new Typically Dutch stamp.

Frank Janse designed the stamps, using photographs of the park in winter.

Joh. Enschede of the Netherlands printed the stamps by four-color offset in 285,000 panes of 10.

Additional Experience Nature stamps to be issued this year will feature the fauna and flora of the marshland near the city of Groningen (Feb. 22), the dunes in North Holland (June 14) and Haarzuilens Country Estate in Utrecht (Aug. 16).

A look at December stamps from the Netherlands