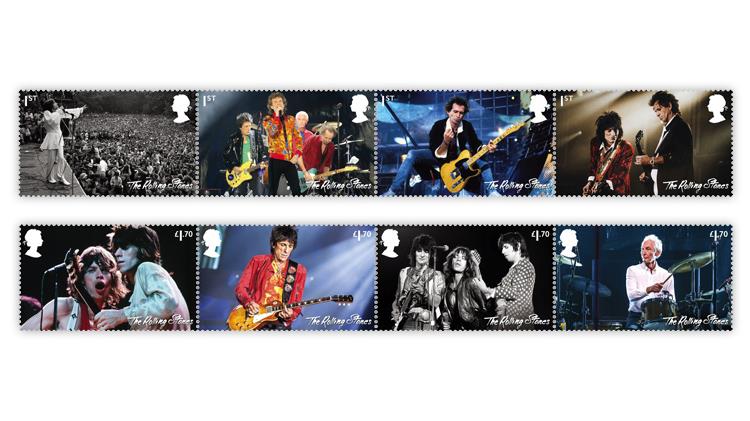 Great Britain’s Royal Mail will commemorate the 60th anniversary of the Rolling Stones on a set of 12 stamps to be issued Jan. 20. Eight of the stamps, in two strips of four, feature scenes from concert performances around the world. 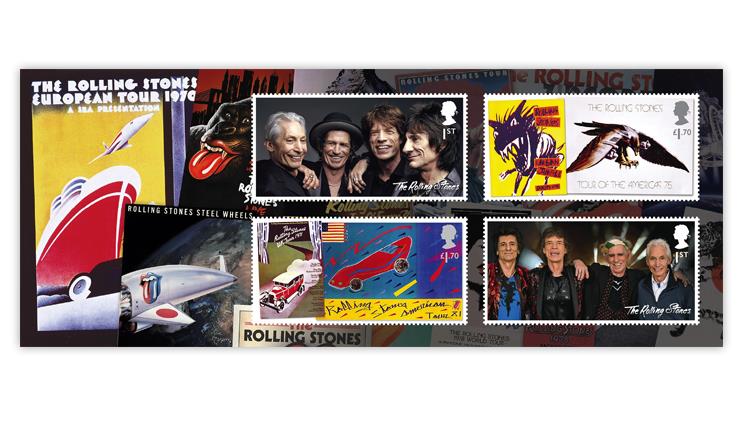 The souvenir sheet in Royal Mail’s Rolling Stones issue combines photographs of the band and concert posters.
Previous
Next

Great Britain’s Royal Mail is celebrating the 60th anniversary of the Rolling Stones on its first commemorative stamps of the year. The 12 stamps are being issued Jan. 20: eight of them in two strips of four with se-tenant (side-by-side) designs, and the other four in a single souvenir sheet.

David Gold, director of public affairs and policy for Royal Mail, said: “Few bands in the history of rock have managed to carve out a career as rich and expansive as that of the Rolling Stones. They have created some of modern music’s most iconic and inspirational albums, with ground-breaking live performances to match.”

The designs of the stamps were revealed Jan. 11. In the accompanying press release, Royal Mail reported that it worked closely with the band members and management team on the stamp issue.

Royal Mail also summarized the long history of the band, which was formed in 1962 and played its first concert July 12 of that year at the Marquee Club in London: “Since the late 1960s, people have called The Rolling Stones ‘The Greatest Rock and Roll Band in the World’. The phrase began as a hyped-up onstage introduction but stuck, despite the Stones’ occasional protestations to the contrary.

“In 2005, the Rolling Stones were awarded the accolade of greatest touring band of all time at the World Music Awards. They have sold an estimated 250m [million] records and in the UK have eight no. 1 singles and 13 no. 1 albums. Their countless awards include four Grammys, three MTV Music Awards and nine NME Awards. They were inducted into the Rock and Roll Hall of Fame in 1989.

“Since they began as a group, their singles and albums have produced a string of evergreen rock classics, powered by some of the greatest guitar riffs ever written.”

The eight stamps in the se-tenant strips show photographs of concert performances around the world. Royal Mail said the stamps capture “moments from some of their legendary performances over the years.”

Founding members of the band singer Mick Jagger and guitarist Keith Richards are shown on the stamps, as are drummer Charlie Watts, who died Aug. 24, 2021, and guitarist Ronnie Wood, who joined the band in 1975. Previous members of the Rolling Stones, including Brian Jones (1942-1969), Bill Wyman and Mick Taylor, are not.

The earliest performance represented on the stamp issue is the July 5, 1969, concert in London’s Hyde Park. The black-and-white photograph featuring Jagger and the crowd is shown on a nondenominated first-class stamp (currently 85 pence).

The stamps in the other strip of four are denominated £1.70 to meet the rates for all international mail weighing up to 20 grams and for mail to European countries weighing up to 100 grams.

The first stamp in that strip shows Jagger and Richards sharing a microphone in New York City in July 1972. On the next stamp, Wood is in the spotlight at a May 2014 concert in Oslo, Norway.

The other two stamps in the strip reproduce a black-and-white photo of Wood, Jagger and Richards taken in August 1976 at Knebworth, Hertfordshire, England; and a color photo of Watts behind his drum kit in October 2017 in Dusseldorf, Germany.

One £1.70 stamp shows posters from the Europe 1990 Urban Jungle tour and the 1975 Tour of the Americas. The other £1.70 denomination includes images of an American flag and automobiles on posters promoting the 1981 American tour and 1971 United Kingdom tour.

More concert posters are shown in the selvage of the souvenir sheet.

Royal Mail’s tribute to the Rolling Stones also includes a 24-page prestige booklet with text and illustrations in addition to the 12 stamps.

In the booklet, the stamps are arranged in three blocks of four (the first-class performance stamps, the £1.70 performance stamps and the souvenir sheet stamps). A fourth stamp pane contains a block of eight Queen Elizabeth definitives with a label in the center featuring an image from the cover of the band’s 1994 Voodoo Lounge album.

Rock music critic Alexis Petridis wrote the text in the booklet. Royal Mail said, “The book starts with The Rolling Stones’ first gig in 1962 and takes the reader on a journey through their rapid rise to the top and their growing reputation as one of the best live touring bands in the world.”

The design agency Baxter & Bailey designed the stamps and souvenir sheet, and International Security Printing printed them by lithography.

The stamps in the se-tenant strips of four were printed in sheets of 48 (sold in panes of 24 at most postal outlets). These stamps measure 50 millimeters by 30mm and are perforated gauge 14 by 14.

While the Rolling Stones issue focused on concert photographs rather than album covers, an earlier British stamp does show one of the band’s albums. Issued Jan. 7, 2010, in a Classic Album Covers set of 10, this first-class stamp depicts the cover of Let It Bleed, released in 1969.

A few other postal administrations also have honored the Rolling Stones on postage stamps. For example, Austria issued a souvenir sheet of four stamps June 18, 2003 (Scott 1924), commemorating the band. The Stones’ logo is pictured in the selvage, and the four €0.55 stamps depict photographs of Richards, Jagger, Watts and Wood, respectively.

Many other products will be offered in conjunction with Royal Mail’s Rolling Stones stamps, including postmarks, first-day covers, a set of 13 postcards reproducing the designs of the stamps and the souvenir sheet, and a presentation pack with all 12 stamps and text by Petridis.

One of the first-day postmarks is from Dartford, England, where a chance encounter between former schoolmates Jagger and Richards on Oct. 17, 1961, led to the creation of the Rolling Stones. The postmark features the name of the band’s 1974 album and song It’s Only Rock ‘n’ Roll.

The other postmark shows the band’s name and is from Tallents House in Edinburgh, Scotland.

The Rolling Stones stamps and related products are available from Royal Mail.