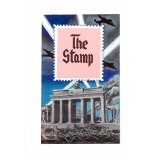 The Stamp is a new philatelic mystery novel by Brian Hawkins.

The following is a press release from the author of a new philatelic mystery novel.

A single strange Nazi postage stamp — hidden for decades — surfaces in Paris, threatening to expose a shameful secret of World War Two that could rewrite history.

On a holiday in Europe, New York ad man Ted Oakley and his girlfriend Jennifer Swanner become innocently entangled in a web of international intrigue when they unknowingly buy a vintage object concealing the stamp.

The work of a master Czechoslovakian engraver in 1940, this solitary stamp is sought after by an unscrupulous Zurich rare stamp dealer, a Japanese millionaire collector, the Deputy Private Secretary to the Queen and MI-5.

Each have their own veiled reasons to obtain it from an unsuspecting Ted Oakley.

In Paris, Zurich, London and Tokyo, their frantic search for this philatelic time bomb takes the reader into the rarified world of big-league stamp collecting.

In their pursuit of Ted Oakley and the stamp, three people will be murdered, and the final fate of this tiny paper rectangle takes a sudden turn that no one could have predicted.

Meticulously researched by its author, Brian Hawkins, The Stamp is a dazzling historical novel, full of intrigue, adventure and philatelic facts.

Now available as an Amazon eBook, The Stamp is a philatelic journey amid the noise of history and a good read for every adult stamp collector.