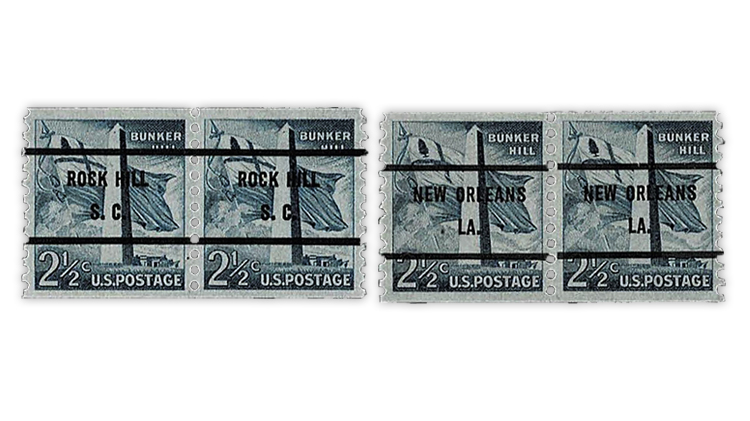 At left is the small-hole variety of the United States 2½¢ Bunker Hill Monument coil precanceled Rock Hill, S.C. At right is a New Orleans precancel with large holes. Rock Hill is the only 2½¢ precancel that is known exclusively with small holes.

Among the most difficult problems in expertizing modern material is the matter of small perforation holes versus large perforation holes. This can be an important distinction because the catalog values and thus retail price differences can be astounding.

I recently had occasion to look at the United States 2½¢ Bunker Hill Monument coils (Scott 1056) of the Liberty series. Here is the applicable information from the listing for the stamp in the 2022 Scott Specialized Catalogue of United States Stamps and Covers:

Issued January 1961, 2½¢ gray blue stamp with small perforation holes; catalog values $400 for mint single, $850 for mint pair and $3,000 for joint line pair. The catalog values are in italics, which indicates items that can be difficult to value accurately.

This note appears after the catalog listing: “No. 1056 with small holes only known with Bureau precancels. It was against postal regulations to make mint precanceled stamps available other than to permit holders for their use. Resale was prohibited. Since some mint examples do exist in the marketplace, values are furnished here.”

In the picture shown here, you can see the differences between pairs of stamps with large perforation and small perforation holes.

It would be easy if all Bureau of Engraving precancels had small holes, but that is not the case. The great majority of Bureau precancels have large holes.

Both large- and small-hole varieties were produced on Cottrell presses. Most of the stamps were printed from 384-subject plates and processed into coils on old manual coiling equipment that yielded large perforation holes.

A total of 93 cities ordered and received Bureau precancels when the 2½¢ Bunker Hill Memorial stamps were first issued in September 1959. Collectors of the time got the singles and pairs they needed for their albums from the early supplies with large perforation holes.

But 40 of the original 93 cities continued to order supplies, and later shipments were of the small-hole variety. Only one additional city, Rock Hill, S.C., ordered Bureau precancels in the Huck period and thus exist with small holes only.

Collectors did not notice the difference when production shifted to the Huck coiling equipment, and the predictable result is that quantities of small-hole examples were not stockpiled and are quite scarce today.

Gripper cracks before the 1954-68 Liberty issue