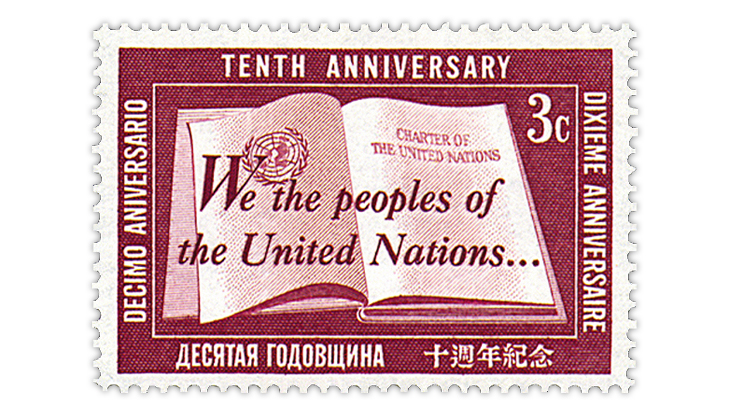 The United Nations Postal Administration announced its 2020 stamp program in its bulletin for collectors, Philatelic Bulletin (issue No. 130).

The UNPA issues stamps for U.N. post offices at U.N. headquarters in New York City; the Palais des Nations in Geneva, Switzerland; and the Vienna International Center in Vienna, Austria.

A pane of 10 $1.15 stamps and 10 labels celebrating the Year of the Rat will start the program on Jan. 2. The UNPA calls such panes “special event sheets.” This pane will be the 10th in the UNPA’s Chinese Lunar Calendar series.

About a week later, on Jan. 10, the UNPA will commemorate the 100th anniversary of the League of Nations on a pane of 10 1.70-franc stamps.

According to the UNPA, definitive stamps are scheduled to be issued Feb. 7. No other details were provided.

Another set of stamps highlighting nature is planned for April 22. To be issued on that date will be three panes of 12 55¢, 1fr and 0.80 stamps each and a souvenir card for International Mother Earth Day and the International Year of Plant Health.

In December 2018 the U.N. General Assembly declared 2020 as the International Year of Plant Health “to raise global awareness on how protecting plant health can help end hunger, reduce poverty, protect the environment, and boost economic development,” according to the Food and Agricultural Organization of the United Nations.

On May 29 a new Greeting pane for UNPA/New York will be issued. Considered a special events sheet, this pane will include 10 $1.15 stamps and 10 se-tenant labels.

Eight $1.15 stamps are slated to be issued Aug. 20 in the Flag series. This series featuring flags of U.N. member states began Sept. 26, 1980, and is updated as new nations join or make significant changes in the designs of their flags.

The World Heritage set scheduled to be issued Sept. 4 will feature bridges, waterways or railways, according to the announcement in the Philatelic Bulletin. Stamps in this series have typically pictured UNESCO World Heritage sites in one country or region. The 2020 set will include 55¢, $1.15, 1fr, 1.50fr, €0.90 and €1.80 stamps in panes of 20 and a prestige booklet or booklets.

The UNPA will honor two European philatelic exhibitions, Balkanfila 2020 and Ovebria 2020, on stamps to be issued Sept. 17 and Oct. 2, respectively.

The Romanian Philatelic Federation and the Museum of Romanian Records will present Balkanfila, a regional exhibition of the Balkan countries, Sept. 17-20 in Bucharest, Romania. For this event, the UNPA will issue a single pane with stamps in three denominations: $1.15, 2fr and €1.80.

A special event sheet of 10 €0.90 stamps and se-tenant labels will highlight the UNPA’s participation in Ovebria 2020 to be held Oct. 2-4 in St. Polten, Austria.

The United Nations was founded on Oct. 24, 1945, in San Francisco, Calif. To commemorate the 75th anniversary, the UNPA will issue three souvenir sheets on Oct. 24, each with two stamps. The planned denominations for the stamps are $1.15, 2fr and €1.80.

This 2020 program is tentative and subject to change.