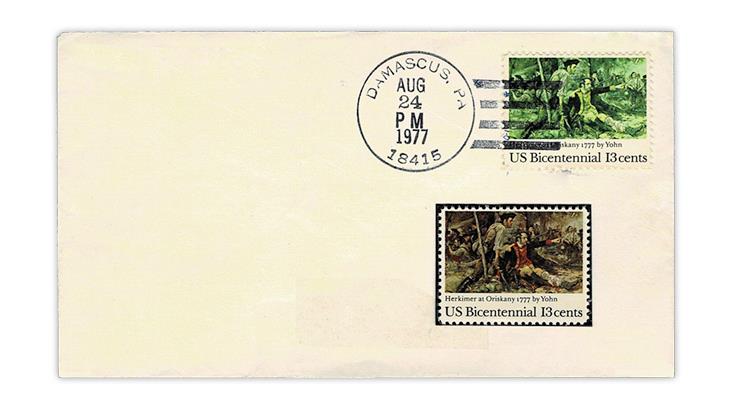 Figure 1. The 1977 13¢ Battle of Oriskany stamp canceled on this cover is the wrong color, as can be seen by comparison with a normal example inset. The stamp bothered a postmaster enough to send it to the Postal Inspection Service as being a possible cou 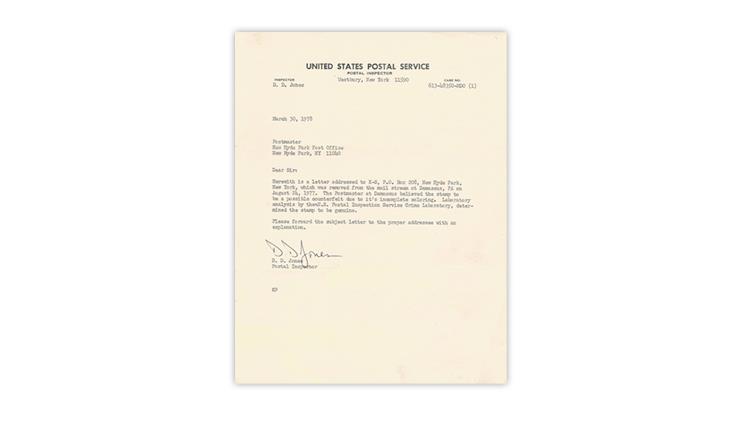 Figure 2. This letter from a United States Postal Service postal inspector about the results of testing of the Figure 1 stamp by the Postal Inspection Service’s crime lab provides its conclusion validating the stamp.
Previous
Next

The United States Postal Service is capable of doing its own expertizing, but it’s a process we in the collector community don’t see very often. A 1978 example recently came my way in the form of the cover in Figure 1. (At some point, the address label was removed from the cover.)

The cover is franked with the 13¢ Battle of Oriskany commemorative issued Aug. 6, 1977 (Scott 1722), that appears considerably different than the normal stamp shown inset.

The cover was accompanied by the letter shown in Figure 2. Signed by postal inspector D.D. Jones, the letter reads in part: “The Postmaster at Damascus [Pennsylvania] believed the stamp to be a possible counterfeit due to it’s (sic) incomplete coloring. Laboratory analysis by the U.S. Postal Inspection Service Crime Laboratory, determined the stamp to be genuine.”

In other words, the post office of origin sent the stamp to the Postal Inspection Service to determine if it was genuine or not.

The letter rules out the first alternative but curiously does not address the second and third alternatives.

Examining the stamp on the envelope under 40x magnification and comparing it to a genuine full-color stamp reveals that the red appears to be missing, or at best, not present in the strength needed to achieve the normal color. In addition, it may be clear in Figure 1 that the white background of the genuine stamp is much brighter than the white of the stamp affixed to the cover.

This is evidence that the stamp on the cover was altered by prolonged exposure to a light source that rendered the color invisible even though the ink carrier fluid seems to be present. It would be identified as an altered genuine stamp if sent in for expertizing.

I don’t know how often the Postal Inspection Service’s lab is asked to rule on counterfeits, but it is clear from reading reports in Linn’s and talking to collectors of counterfeits that the bad guys who have been counterfeiting U.S. stamps have expanded their operations to include virtually every stamp issued this year by the U.S. Postal Service.

The counterfeiters have even gone so far as to add tagging to the counterfeits, thus removing what has been the best way of identifying them in the past.

This is nothing less than a declaration of war on the USPS by one or more foreign countries, most often thought to be the People’s Republic of China. What used to be a trickle of lost revenue absorbed as a cost of doing business, now threatens to become a raging torrent of lost postage revenue, as well as lost revenue from collectors.

What is the USPS going to do about this? It must be losing an enormous amount of income and will continue to do so as the year progresses.

There has been no public response as of the time this is being written, but surely the USPS must respond to the avalanche of counterfeit postal material being sold on the internet.

Given how difficult it would be to stop mail use piece by piece, one would expect that the Postal Service would go after the wholesaling operations website by website, seller by seller. But I’ve seen nothing in that direction yet. If the USPS doesn’t do that, it can raise rates all it wants, but the income will continue to drop unless the mass counterfeiting distribution is put out of business.