The USPS phrase that created stamps just for collectors 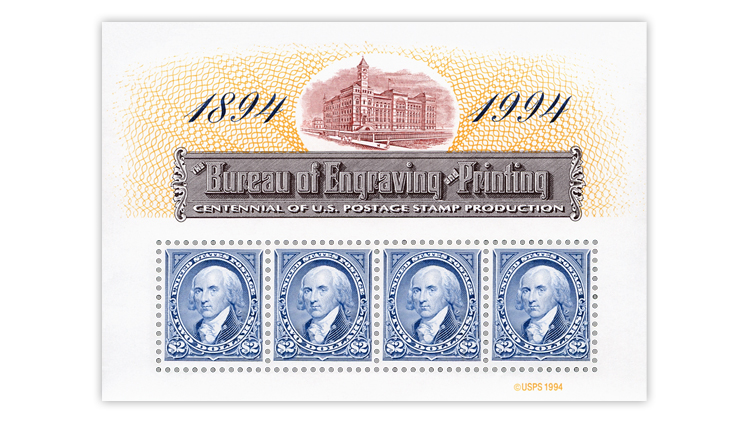 Following the 1989 World Stamp Expo show in Washington, D.C., the United States Postal Service issued a number of panes and sheets of stamps featuring designs of classic U.S. stamps. One such issue is the 1994 pane of four $2 stamps celebrating the 100th anniversary of the Bureau of Engraving and Printing.

When the United States Postal Service agreed to underwrite the establishment of a new Smithsonian museum in 1990, Postmaster General Anthony M. Frank added an unusual provision to the contract.

Frank got the Postal Service’s board of governors to endorse the deal by promising funds for the museum would come from a world-class philatelic exposition that the USPS would sponsor and from “the sale of assorted philatelic materials.”

That phrase received little attention at the time or when the museum opened in 1993.

The phrase was not fully explained in the Nov. 6, 1990, press release that disclosed the agency’s decision to spend $15.4 million on a new museum in the old City Post Office on Capitol Hill in Washington, D.C.

But Frank gave a strong hint at what he expected in the press release.

“Revenues from the sales of postage and postal services to American mail users will not be used to support this effort,” he said, underlining the words will not.

The planned stamp exposition that Frank said would be modeled after the 1989 World Stamp Expo in Washington, D.C., never materialized because of what postal officials cited as unexpected problems.

Frank considered the 1989 stamp show a big success. It helped the USPS fund the costs of a gathering of the worldwide Universal Postal Union in Washington that year.

Sales of the never fully defined “assorted philatelic materials” aimed at stamp collectors — not the general public — have continued over the years.

What were some of these items?