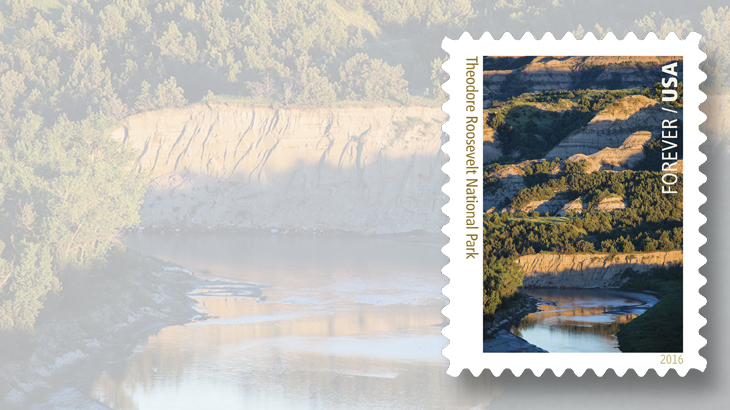 Theodore Roosevelt National Park in North Dakota will be featured on a forever stamp to be issued June 2.

The stamp set, which will be issued June 2 during World Stamp Show-NY 2016 at the Javits Center in New York City, commemorates the 100th anniversary of the National Park Service.

Photographer Q.T. Luong of San Jose, Calif., took the photograph in July 2013 in the North Unit of the park.

Plans for Theodore Roosevelt National Park were conceived not long after the nation’s 26th president died at age 60 in 1919. Years of planning began to pick up steam during the administration of Roosevelt’s fifth cousin, Franklin D. Roosevelt, but it was President Harry Truman who signed the 1947 bill creating the national park.

The park today covers more than 70,000 acres, of which almost 30,000 are designated as wilderness areas. Visitors enjoy hiking, biking, horseback riding, canoeing and many other activities, and can visit the ranches where Theodore Roosevelt lived and worked during his time in North Dakota.

Since April 4, the Postal Service has been revealing one National Parks stamp design per day, and will soon reveal the final design.