Thinking outside the stamp exhibition frame 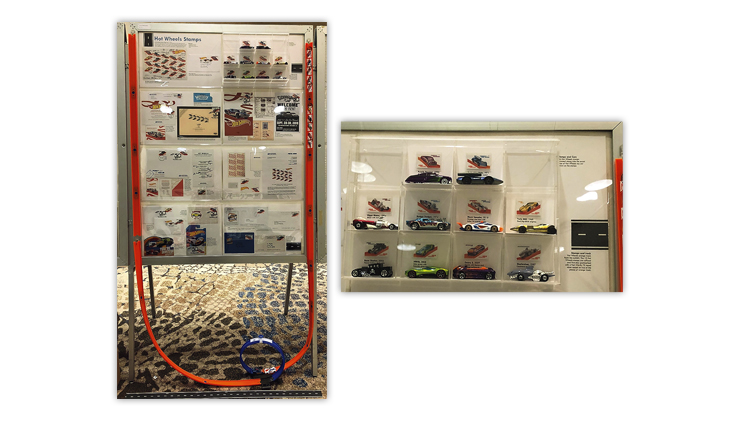 A display case (right) with toy cars inside was attached to Linn’s editor-in-chief Jay Bigalke’s exhibit on the U.S. Hot Wheels commemorative forever stamps. The exhibit was first displayed at the Chicagopex 2018 stamp show held in November in Itasca, Ill

When the United States Postal Service issued its Hot Wheels commemorative forever stamps Sept. 29, 2018, I already had a plan in mind to create a fun single-frame stamp exhibit on the issue.

While some might think a Hot Wheels stamp issue isn’t a serious subject, I treated it as such, but I also pushed the boundaries of what is normally done with a stamp exhibit at a show.

He wrote, “Creativity in exhibiting doesn’t end with the AAPE criteria for winning the [creativity] award.”

He also outlined some of the criteria: an unusual subject, inventiveness in exhibit preparation, inclusion of philatelic material, and the use of humor.

Drew mentioned some of the items that exhibitors have used in their “outside of the frame” exhibits. These ranged from sound boxes that played circus music to slave shackles to a box used to ship tea.

For my exhibit, I acquired examples of all 10 of the toy cars (exact year and paint scheme) that are pictured on the stamps. I bought a plastic display case for them, and used fishing line to hang the case on the exhibit frame.

The appropriate stamp was mounted behind each car in the case, along with a brief description.

Then I probably took it a step too far by adding orange Hot Wheels track up and down the side of the exhibit frame (the track was attached with Command hooks) and looping the track at the bottom. And, naturally, I placed two cars with the exhibit for people to play with (and they did!).

Gil Koenigsaecker of Illinois sent a note to Linn’s about the Hot Wheels exhibit, writing that it “was very creative and caught everyone’s attention.”

“If our hobby is to survive we need to attract noncollectors,” Koenigsaecker said. “This exhibit would certainly do that … Maybe it can encourage others to create such fine promotional exhibits in the future!”

I greatly appreciated receiving a note with such kind words. The exhibit was shown noncompetitively, but I did it for the reasons Koenigsaecker noted. If this is what gets a noncollector’s attention and attracts them to our hobby, that would be wonderful.

And, I also hope that the exhibit encourages other exhibitors to do what Drews suggested, “Next time you work on an exhibit, think outside the box and outside the frame.”

’Tis the season for stamp gifts