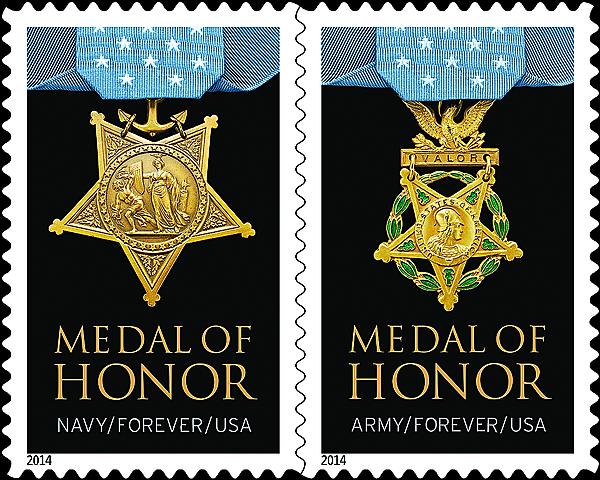 Shown at top is the front of the folded Medal of Honor stamps prestige folio of 20, with the inside pages shown below. The back, not shown, contains 18 stamps. 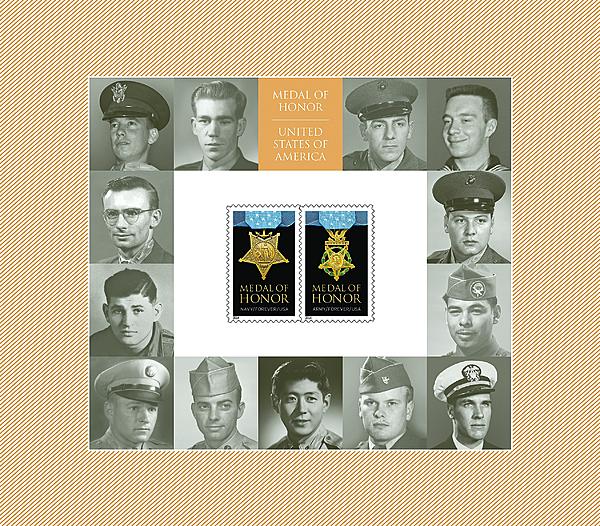 The first-day ceremony for this two-stamp set is scheduled to take place at the Arlington National Cemetery Amphitheater in Arlington, Va.

Collectors are encouraged to arrive early for the event, at approximately 10:30 a.m., because a wreath laying will take place at 10:40 a.m. The first-day ceremony will start at 11 a.m.

No stamp sales will take place at the event site. The Postal Service retail unit will be at the Sheraton Pentagon Hotel, 900 S. Orme St., Arlington, Va., from 11:30 a.m. to 2 p.m. selling the stamps and providing first-day cancellations.

A Postal Service publicity image of the cover and inside of this product is shown on page 14.

The folded pane of 20 will present two stamps on what serves as the front cover of the folio (top), with 18 stamps on the reverse and text in the interior.

The two stamps each depict a different medal. The only difference in design from last year’s World War II Medal of Honor stamps, based on the USPS publicity images, is that the year date reflects a 2014 issue.

One stamp shows the Navy version of the Medal of Honor and the other pictures the Army version. The images each show the full medal and part of the medal’s ribbon against a black background.

The Navy offers the following description of its Medal of Honor:

The current Navy Medal of Honor is a five-pointed bronze star, tipped with trefoils containing a crown of laurel and oak. In the center is Minerva, personifying the United States, standing with left hand resting on fasces and right hand holding a shield blazoned with the shield from the coat of arms of the United States. She repulses Discord, represented by snakes. The medal is suspended from the flukes of an anchor. There is also an authorized ribbon and rosette to be worn in lieu of the medal. The Medal of Honor Ribbon is blue with five stars, 2 at the top and 3 at the bottom. The six-sided blue silk rosette bears 13 stars and is worn on civilian attire. Medal of Honor recipients may also wear the Medal itself around the neck of civilian attire for special occasions.

The Pentagon provides the following description of the Army Medal of Honor:

A gold five pointed star, each point tipped with trefoils, 1½ inches wide, surrounded by a green laurel wreath and suspended from a gold bar inscribed “VALOR,” surmounted by an eagle. In the center of the star, Minerva’s head surrounded by the words “UNITED STATES OF AMERICA.” On each ray of the star is a green oak leaf. On the reverse is a bar engraved “THE CONGRESS TO” with a space for engraving the name of the recipient.

The Medal of Honor is America’s highest award for military valor. An inscription centered above the 18 stamps on this pane reads, “For conspicuous gallantry and intrepidity at the risk of life, above and beyond the call of duty.”

There are three different Medals of Honor for the Army, Navy (including Marine Corps and Coast Guard) and Air Force. However, the Air Force medal was established in 1965; before that date the Army medal was awarded.

The Navy reports that a fourth version of the Medal of Honor for the Coast Guard has been authorized but has never been awarded or designed, “partly because the U.S. Coast Guard is subsumed into the U.S. Navy in time of declared war.”

The first Medals of Honor were awarded more than 150 years ago, on March 25, 1863, to six surviving members of Andrew’s Raiders, Union Army soldiers from Ohio regiments captured during the Civil War.

The cover of the folded folio includes one each of the two Medal of Honor stamps surrounded by photographs of 13 of the last living Medal of Honor recipients.

Four of the thirteen honorees — Charette, Hernandez, Mize and Stone — died before the stamps were issued.

Antonio Alcala was the designer and art director for this stamp issue. He used photographs of the Naval and Army medals taken by Richard Frasier.

On the inside of the folded folio the following paragraphs share details on the stamp project:

The Medal of Honor, the nation’s highest award for valor in combat, dates to 1861, when Abraham Lincoln signed the first bill authorizing the award into law. Today, the medal is presented ‘for conspicuous gallantry and intrepidity at the risk of life, above and beyond the call of duty.’

The President presents the medal on behalf of Congress, which is why the award is sometimes called the Congressional Medal of Honor. Of the 6.8 million Americans who served in the armed forces during the Korean War, only 145 received the Medal of Honor. More than two-thirds of the recipients were killed in action.

On March 18, 2014, President Barack Obama presented the Medal of Honor to 24 Army veterans whose bravery had been previously recognized by the Distinguished Service Cross, the nation’s second highest military decoration. The long-overdue upgrade to the Medal of Honor followed a congressionally mandated review of records from World War II and the Korean and Vietnam Wars to ensure that the heroism of our veterans had not been overlooked because of prejudice or discrimination. At the White House ceremony, nine Medals of Honor were awarded posthumously to Korean War veterans.

In January 2012, the U.S. Postal Service invited the last living recipients of the award from the Korean War to join in honoring the extraordinary courage of every individual who received the Medal of Honor for his service during the war. All the men pictured here agreed to participate in this momentous event. Sadly, William R. Charette, Rodolfo P. Hernandez, James L. Stone, and Ola L. Mize died before the stamps could be issued. Their photographs are still included, as they remain among the last representatives of a remarkable group whose courage and devotion we honor with this issuance.

Two different press sheets, one with and one without the die cuts that normally separate individual stamps, will each consist of three unfolded panes of 20 stamps. Each sheet will be offered at the face value of $27.60, with 1,000 produced of the die-cut version and 1,500 of the sheet without die cuts.

A pictorial first-day cancel will be available at the first-day ceremony and by mail. The cancel shows a soldier holding a rifle.

Collectors have a 60-day grace period to mail in requests for first-day postmarks.

First-day cancel ordering information
Standard ordering instructions apply. Collectors requesting first-day cancels are encouraged to purchase their own stamps and affix them to envelopes. The first-day cover envelopes should be addressed for return (a removable label may be used), and mailed in a larger envelope addressed to Medal of Honor Stamps, Arlington Main Office, 3118 Washington Blvd., Arlington, VA 22201-9998. Requests for first-day cancels must be postmarked by Sept. 24.
The Postal Service’s uncacheted first-day cover set of two is item No. 587416 at $1.86. USPS order numbers for stamps and FDCs also appear in Linn’s 2014 U.S. Stamp Program.