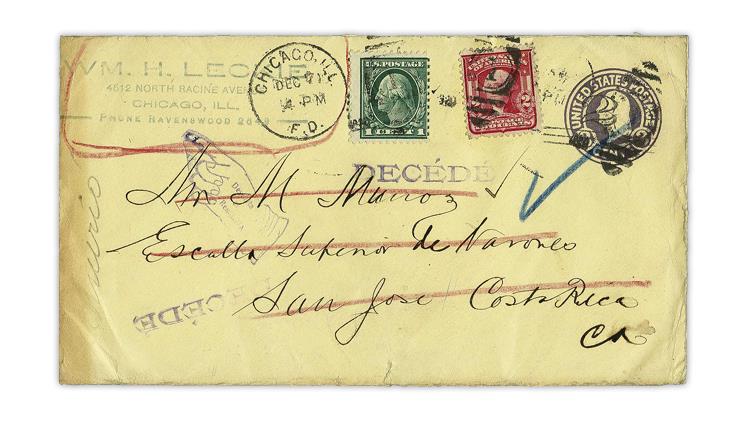 H.R. Harmer’s Dec. 8-10 auction series includes the Joe Pryluck collection of United States surcharged postal stationery. A highlight of the collection is this cover representing the earliest documented use of the 1920 2¢ on 3¢ dark violet on amber paper 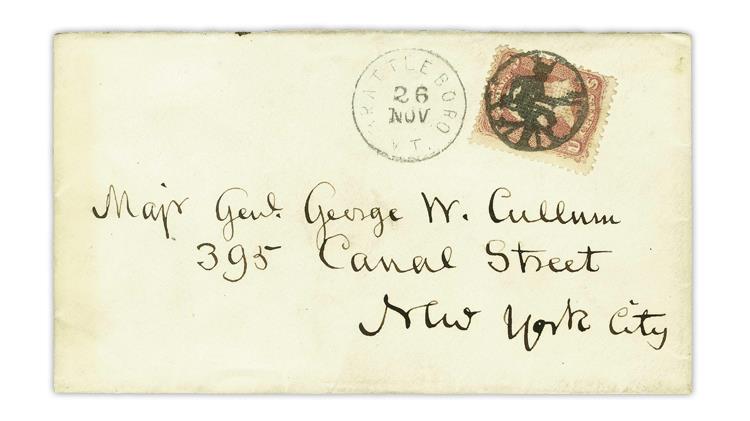 This cover featuring a bold, socked-on-the-nose strike of the Brattleboro, Vt., Devil with Pitchfork fancy cancellation will be up for bids during the Dec. 10 H.R. Harmer sale of part 4 of the Erivan collection of U.S. and Confederate States postal histor
Previous
Next

H.R. Harmer will offer three name collections and an array of United States, British Commonwealth and worldwide stamps and postal history during four sales to be held Dec. 8-10 at the firm’s office in New York City.

Included in the Pryluck offerings is an attractive postally used example of the 1920 2¢ on 3¢ dark violet on amber paper stamped envelope (Scott U449) mailed Dec. 7, 1920, from Chicago, Ill., to San Jose, Costa Rica. A 1¢ green Washington and 2¢ carmine Washington and Shield were added to pay the required 5¢ postage.

H.R. Harmer notes that the cover was backstamped Dec. 24 in San Jose before being returned to the sender because the addressee was deceased, as indicated by the purple “Decede” and pointing finger handstamps on the front.

Adding to the cover’s appeal is a 2004 American Philatelic Expertizing Service certificate stating the cover represented the earliest documented use of Scott U449 at the time the certificate was issued. H.R. Harmer lists the cover with an opening bid of $60.

Most of the 290 lots in the Provera collection are 19th-century U.S. stamps and postal history, many of which are accompanied by expertizing certificates.

All of the 20th-century U.S. stamps in the Provera collection come with 2020 graded certificates from Professional Stamp Experts. A sizeable number of these stamps also come with earlier Philatelic Foundation certificates.

One such dual certified stamp is a never-hinged example of the 1917 $1 violet brown Benjamin Franklin (Scott 518). Listed with a starting bid of $1,250, the stamp comes with a 1995 Philatelic Foundation certificate and a 2020 graded superb 98J certificate from Professional Stamp Experts. The “J” designation indicates a stamp with jumbo margins.

An enormous variety of items will be offered to bidders, including 790 lots of U.S. stamps and covers, and 397 lots of British Commonwealth material.

The last of the three sessions of the Dec. 9-10 auction features collections and balances. Among the single country offerings is a 1970-2017 Monaco collection housed in three Lighthouse albums that “appears complete for the years listed including booklet panes and souvenir sheets,” according to H.R. Harmer. The collection is listed with a starting bid of $300.

Among the fancy cancels on cover is the Devil with Pitchfork of Brattleboro, Vt. The example in the Erivan collection is a particularly bold strike on a cover mailed from Brattleboro to New York City. The cancel, which is socked on the nose, just ties the 1867 3¢ rose Washington (Scott 83) to the envelope.

H.R. Harmer provides the following short biography for the addressee: “Gen George Cullum (1809-92), was a soldier, engineer, and writer. Cullum served as a general in the Union Army during the Civil War, primarily in the Western Theater, and served as the 16th Superintendent at West Point. Following his retirement from the Army, he became a prominent figure in New York society, serving in many societies, and as vice president of the American Geographical Society.”

H.R. Harmer states that this Devil with Pitchfork fancy cancel cover once resided in the Ryohei Ishikawa collection that Christie’s Robson Lowe sold in 1993. The cover is offered with a starting bid of $2,500.

Separate catalogs for each of the four auctions are posted on the H.R. Harmer website, with online bidding options available.