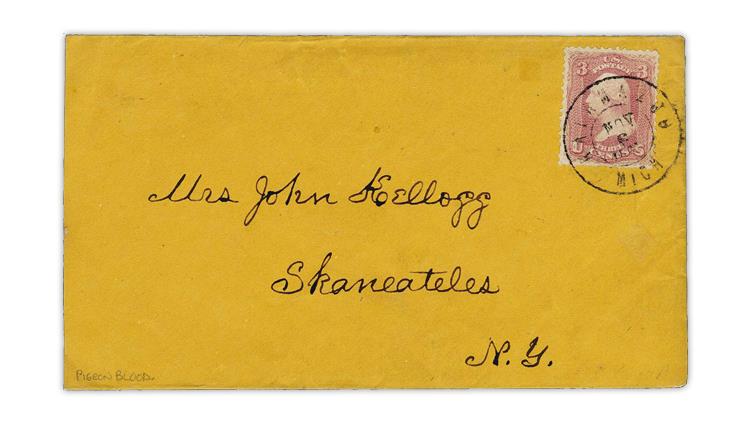 H.R. Harmer’s June 21-25 auction series presents the second part of the Ing. Pietro Provera collection of United States stamps and postal history. One of the choice items in the collection is this attractive cover franked with an 1861 3¢ George Washington 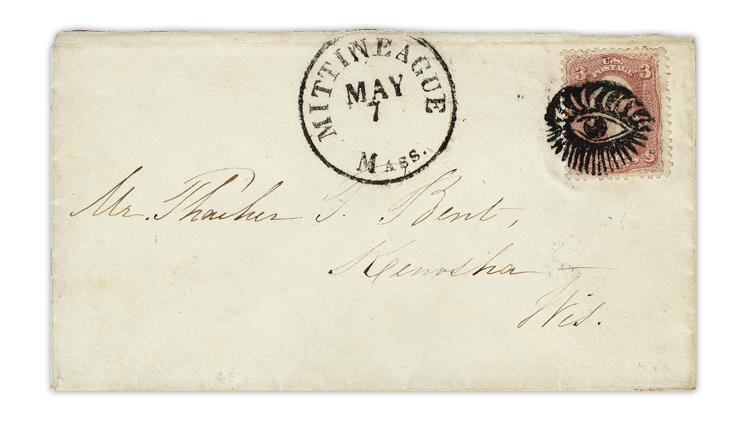 This cover featuring a bold strike of the Mittineague, Mass., All-Seeing Eye fancy cancellation will cross the auction block during the June 24 sale of part 5 of the Erivan collection of U.S. and Confederate States postal history. The cover is the discove
Previous
Next

H.R. Harmer will auction selections from three important name collections and an array of United States, British Commonwealth and worldwide stamps and postal history during five sales to be held June 21-25 at its Rockefeller Plaza office in New York City.

This impressive series of auctions opens June 21 with the first part of the Dr. Larry C. Parks collection of postal stationery, which focuses on Great Britain and British Commonwealth. Part 2 of the Ing. Pietro Provera collection of U.S. stamps and postal history will be offered June 22.

Included in the Parks’ offerings are dozens of attractive items listed with opening bids that will suit collector budgets large and small.

The name of the card is a reference to the Great White Fleet, the nickname given to a group of U.S. Navy battleships that completed a round-the-world trip from Dec. 16, 1907, to Feb. 22, 1909. According to H.R. Harmer, only 2,000 Tasmania Great American Fleet postal cards were printed.

H.R. Harmer points out that this used Great American Fleet postal card has a “couple trivial light corner wrinkles” but is otherwise “still fresh and Very Fine.” H.R. Harmer is offering the postal card with an opening bid of $150.

In the introduction to the Provera sale catalog, H.R. Harmer president Charles Epting writes: “The vast majority of this collection was purchased in the days before grading, and many demonstrate intangible qualities which cannot be distilled into a number. These stamps and covers simply speak to you.”

One such item that likely will speak alluringly to some bidders is an 1861 cover sent from Kalamazoo, Mich., to Skaneateles, N.Y., franked with an 1861 3¢ George Washington stamp printed in the scarce and desirable pigeon blood pink shade (Scott 64a).

Notable features of this cover include the stamp’s exceptional centering and a clear, legible strike of the Kalamazoo postmark dated Nov. 6, 1861, that neatly ties the stamp to the cover.

H.R. Harmer notes that the cover is “barely reduced at left” but is “still Extremely Fine in every regard, a lovely stamp on a pristine cover.”

Philatelic Foundation certificates issued in 1968 and 2000 accompany the cover, which once resided in the collection of Creighton C. Hart, according to H.R. Harmer.

Scott 64a is valued on cover at $4,750 in the Scott Specialized Catalogue of United States Stamps and Covers. The value is italicized to indicate that limited market data was available to the Scott editors.

An enormous variety of items will be offered to bidders, including 862 lots of U.S. stamps and covers and 299 lots of British Commonwealth material.

The last of the three sessions of the June 22-24 auction features collections and balances, many of which provide the opportunity for a collector to start a new country at a very reasonable cost.

Among the single country offerings is an 1886-2017 Gibraltar collection of mostly unused stamps housed in two Scott albums that is “generally Very Fine and clean, a wonderful foundation collection,” according to H.R. Harmer. The collection has a starting bid of $400.

Covers from the Erivan collection in the following categories will be up for bids during the June 24 sale: U.S. postmasters’ provisionals; U.S. general issues; carriers and locals; Pony Express; Western expresses; Hawaii; Confederate States postmasters’ provisionals; fancy cancellations from Waterbury, Conn., and other cities; and Union and Confederate patriotic covers of the Civil War.

If eye-catching fancy cancels are to your liking, look no further than the All-Seeing Eye of Mittineague, Mass. The example in the Erivan collection is an exceptionally bold strike on a cover mailed from Mittineague to Kenosha, Wis.

The All-Seeing Eye cancel, which is almost socked on the nose, just ties the 1861 3¢ rose George Washington stamp (Scott 65) to the envelope.

H.R. Harmer draws attention to the cover’s importance, stating that it is “the discovery cover which helped identify which town this wonderful cancellation originated from, perhaps unique with at most one other cover known, and at least one off-cover example known in blue ink.”

Closing out the H.R. Harmer auction series on June 25 is the Don Peterson collection of Spanish Philippines 1872-98.

The Peterson collection features 205 lots centered on the “fascinating and complex stamps issued under the authority of the Spanish government,” writes Epting in the catalog introduction. “Included are many rarities and uniquities, as well as a wealth of large multiples and complete sheets.”

One of the rarities to cross the auction block is an unused block of four of the 1881 2-real on 8-cuarto on 2r blue (Philippines Scott 123) from the 1881-88 regular issue surcharged in black, blue, green, magenta, red or yellow. The block of four in the Peterson collection is surcharged in red.

H.R. Harmer describes this block as “the largest known multiple with only two mint blocks recorded” and is offering it with a starting bid of $600.

In unused condition, Philippines Scott 123 is valued at $65 in the Scott Classic Specialized Catalogue of Stamps and Covers 1840-1940.

Separate catalogs for each of the five auctions are posted on the H.R. Harmer website.

Each catalog is downloadable, and online bidding options are available.