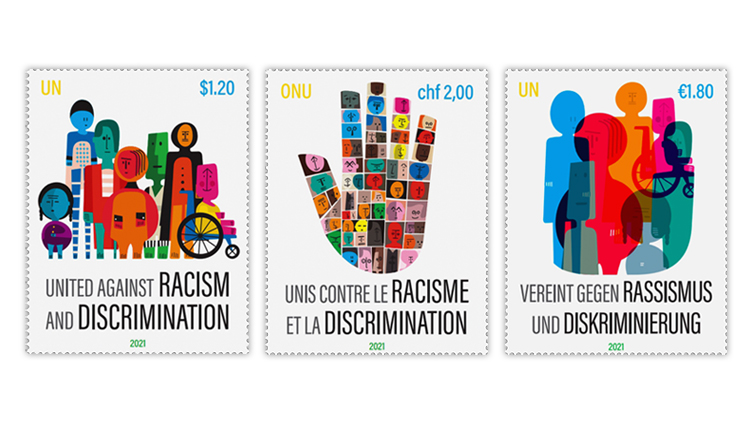 The United Nations Postal Administration is issuing three stamps March 19 to draw attention to the global fight against racism and discrimination. Each stamp features colorful artwork created by Abracadabra Design Studio in Mexico.

The stamps arrive two days before the International Day for the Elimination of Racial Discrimination, which is observed annually on March 21.

The stamps are in separate panes of 10 with decorative selvage headers.

The $1.20 stamp is for use from the UNPA post office at the U.N. headquarters in New York City. The design features a stylized multicolor drawing of various people, including one person in a wheelchair at right. “United Against Racism and Discrimination” is printed in two lines across the bottom of the stamp.

The 2-franc stamp depicts miniature drawings of people’s faces that are arranged in the shape of a hand. This stamp is for use from the Palais des Nations in Geneva, Switzerland. “United Against Racism and Discrimination” in French appears below the stylized hand.

The €1.80 stamp for use from the Vienna International Center in Vienna, Austria, shows a drawing of people (including one person in a wheelchair) similar to the one on the $1.20 stamp. The German equivalent of “United Against Racism and Discrimination” is printed below the drawing.

“Since its creation in 1945, the United Nations Educational, Scientific and Cultural Organization (UNESCO) has been on the forefront of the fight against racism,” the UNPA said in its Bulletin for collectors.

“In 1978, it adopted the Declaration on Race and Racial Prejudice, which reaffirms that ‘All human beings belong to a single species and are descended from a common stock. They are born equal in dignity and rights and all form an integral part of humanity’. This quote appears on the [United Against Racism and Discrimination] stamp sheets in English, French and German respectively.”

The UNPA reported that for this stamp set it focused on the UNESCO master class series against racism and discriminations and that the artwork shown on the stamps is part of that series.

The master class was launched in November 2019 as a global “training for trainers” initiative, according to the UNESCO website.

The UNPA said this master class series “seeks to empower students to become youth champions in their own schools and communities and spread awareness on how to deconstruct the mechanisms underlying racism and discriminations. Using a human rights-based approach, the courses address various topics related to inclusion and non-discrimination, such as racial discrimination, gender-based discrimination, rights of indigenous peoples and discrimination against persons with disabilities.”

Cartor, a security printer in Meauce, France, printed the United Against Racism and Discrimination stamps by hexachrome, according to the UNPA. Each stamp measures 30 millimeters by 40mm and is perforated gauge 13¼ by 13, and each pane of 10 is 170mm by 146mm.