Time to talk turkey for the December cartoon contest 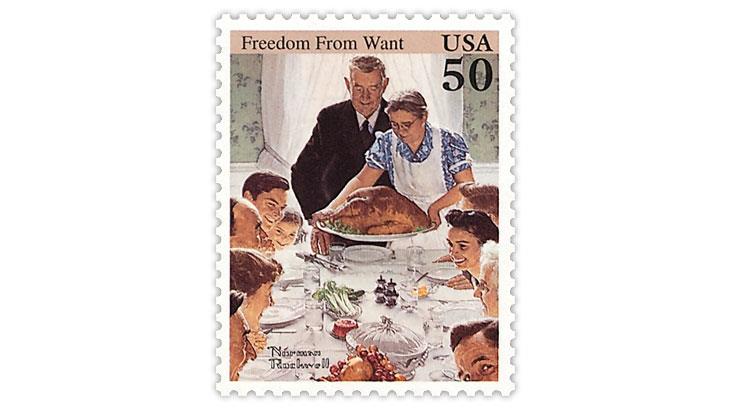 The cartoon caption contest image for December is the 50¢ Freedom From Want stamp from the 1994 Norman Rockwell souvenir sheet. Entries must be received by Dec. 24 for a chance to win a prize. 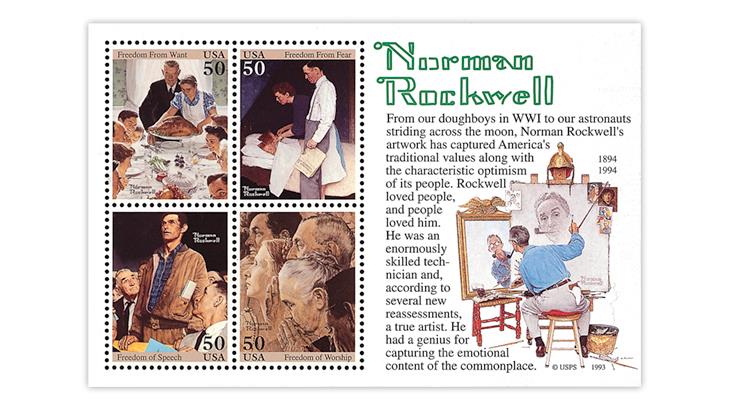 To commemorate the 100th birth anniversary of painter and illustrator Norman Rockwell, the United States Postal Service issued a 29¢ stamp (Scott 2839) and a souvenir sheet of four 50¢ stamps (2840) on July 1, 1994.

The souvenir sheet with stamp designs featuring Rockwell’s portrayal of the four basic human freedoms expressed by President Franklin D. Roosevelt in his Jan. 6, 1941 speech (freedom of speech, freedom of worship, freedom from want and freedom from fear) is especially creative. The sheet is shown here.

By tradition, this is a time of year when turkeys are destined for festive dinners, as pictured in the 50¢ Freedom From Want stamp (Scott 2840a) in the souvenir sheet, not a fate they would relish if they were to philosophize on the matter.

However, philosophy is not high on a turkey’s list of needs, but this month’s cartoon caption contest gives you the opportunity to speak on behalf of the turkey serving as the main attraction on the table portrayed.

For this contest, I want you to help turkeys everywhere speak about their fates, or about how they see the world of stamp collecting, politics, gastronomy or anything else that occurs to you.

For each winner, the prize will be a 13-week subscription to Linn’s (a new subscription or an extension). Entries must reach me no later than Dec. 24.

It’s OK to be grouchy for the November cartoon contest