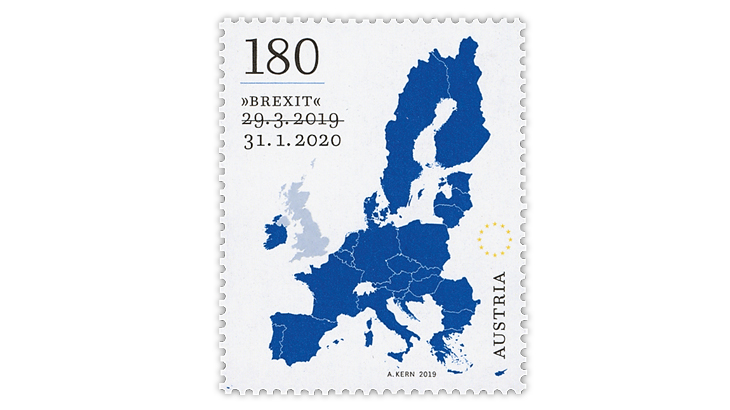 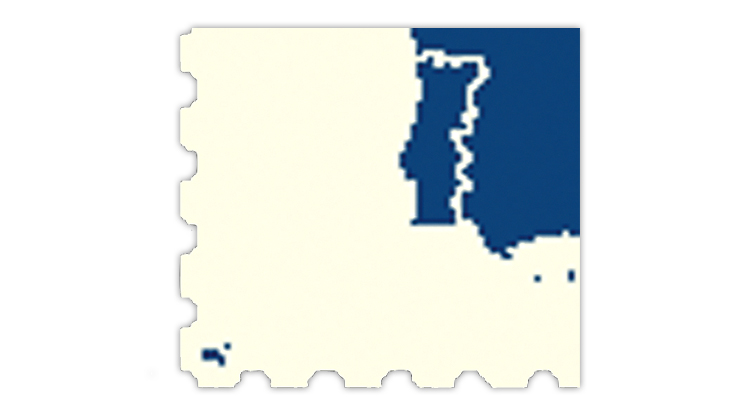 What appears to be a tiny blue dot or smudge in the far lower left corner of Austria’s Brexit stamp is actually a map of Madeira, Porto Santo and the Desertas Islands.
Previous
Next

Members of the CartoPhilatelic Society (collectors of maps on stamps) discovered islands almost hidden in the design of Austria’s recently issued Brexit stamp.

As reported in the March 2 Linn’s, Austria Post issued an overprinted stamp Jan. 31 to commemorate Great Britain’s exit from the European Union. The overprint was on a previously unissued stamp prepared for the original Brexit date of March 29, 2019.

Members of the CartoPhilatelic Society immediately noticed the small blue dot just above the lower left perf on the stamp, and the society’s vice president and checklist editor, David Wolfersberger, wrote to Linn’s about it.

Wolfersberger had examined the stamp under a microscope and found that “what looks like a blue dot or smudge” on the design was a map of Madeira, Porto Santo and the Desertas Islands.

He also contacted Anita Kern, the designer of the stamp, by email, and she confirmed that this blue dot was indeed Madeira and the adjacent Islands.

Kern also pointed out other map details on the stamp: “The tiny spot south of Sicily is Pantelleria, belonging to Italy.

“Malta is there as well, but Gozo (belonging to Malta) faded away.

“South of Malta should be the island Lampedusa (Italy, well-known because of immigration), but this is missing due to an outline which ‘swallowed’ some of the tiniest islands (should be located upon the ‘A’ of my signation.)

“South of Crete (Greece) you find the island Gavdos.”

“If you look at digital maps of Sicily, Portugal, Spain and Crete you will find all the small islands.

“Some of them are also on the stamp.”

In a second email to Wolfersberger, Kern said that she designed the stamp digitally on a large scale to include all of the details of the map. However when the image was reduced to stamp size, some of these details were lost or became blurry, she said.

For more information about the CartoPhilatelic Society, visit the group’s website.