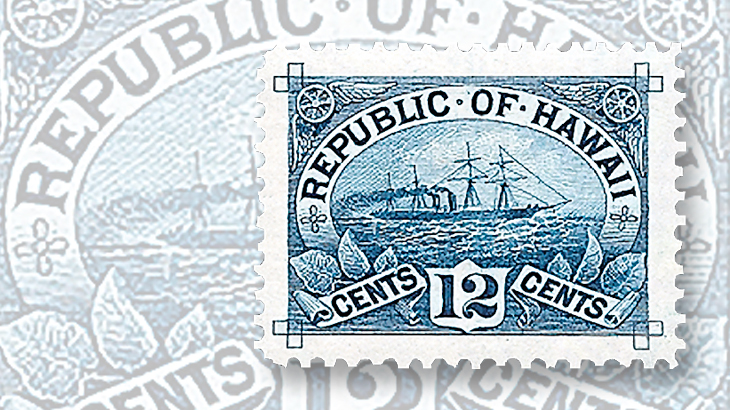 Hawaii is the northernmost island group in Polynesia. Before becoming a United States territory and later the 50th state, it was an independent kingdom and later a republic.

In 1894, the Republic of Hawaii issued an attractive set of pictorial definitives (Scott 74-79). The 12¢ SS Arawa stamp (Scott 78) is one of the most appealing stamps from the set.

The SS Arawa was a sail-assisted steamship built in 1884. It carried passengers and immigrants on regular transits from the United Kingdom to Australia and New Zealand, and back.

In 1893, it was leased to a new operator who used it to transport passengers and cargo from Australia to Vancouver, British Columbia, and back. The ship made regular port calls in Hawaii on its transits of the Pacific Ocean.

This stamp is popular with topical collectors of watercraft. The 2016 Scott Specialized Catalogue of United States Stamps and Covers values the stamp at $17.50 in unused original gum condition and at $40.00 in mint never-hinged condition.

The stamp is readily available in unused original gum condition and is selling in the $10-to-$15 price range. It is harder to find in mint never-hinged condition and is a good buy at around $35.