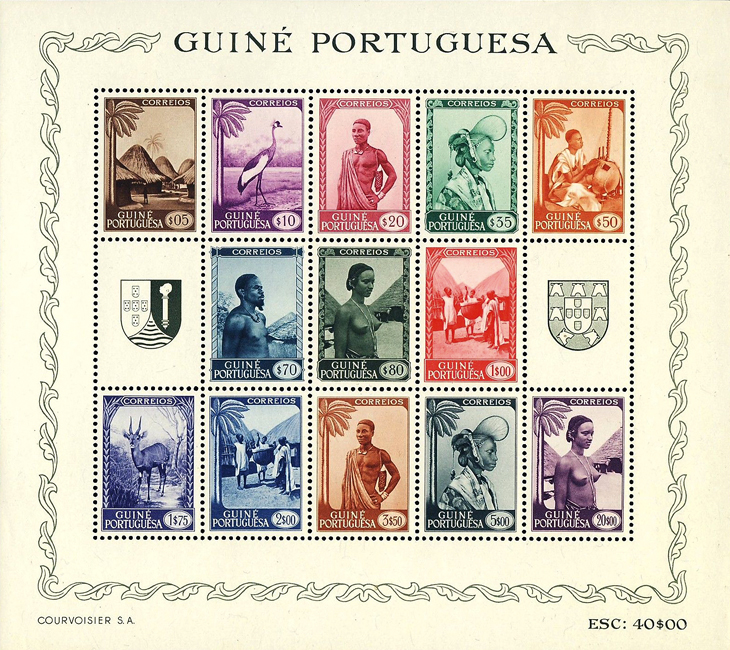 The 1948 Portuguese Guinea souvenir sheet of 13 Local Scenes stamps and two labels (Scott 270a) is in demand in mint never-hinged condition and is selling for $100 to $125.

Portuguese explorers arrived on the west coast of sub-Saharan Africa in the early 1400s. They came looking for gold, but stayed to exploit the slave trade. By 1446, they established the colony of Portuguese Guinea with its capital at Bissau.

Following the outlawing of slavery and suppression of the slave trade, Portuguese Guinea became a center of peanut cultivation, with most of the crop being exported to Portugal in the form of cooking oil. On Sept. 10, 1974, the former colony became the Republic of Guinea-Bissau.

In April 1948, a set of 13 stamps depicting local fauna, people and scenes was issued (Scott 258-270). A souvenir sheet of 13 with two labels (Scott 270a) also was produced and sold for 40 escudos. The 2016 Scott Standard Postage Stamp Catalogue values the souvenir sheet at $67.50 in unused hinged condition.

The souvenir sheet is a good buy in unused hinged condition at $50 to $60. However, it is in demand and commands a large premium in mint never-hinged condition, selling for $100 to $125.